Earlier if you have been an avid reader at Wccftech, you may have read of the Cedar Trail CPU’s launch had been pushed to November due to graphics driver issues; particularly with DirectX that was later pointed out.

Anyways moving on, benchmarks of the 2nd generation of Intel Atom processors have been leaked by VR-Zone.com that show some much needed improvement for the netbook segment. 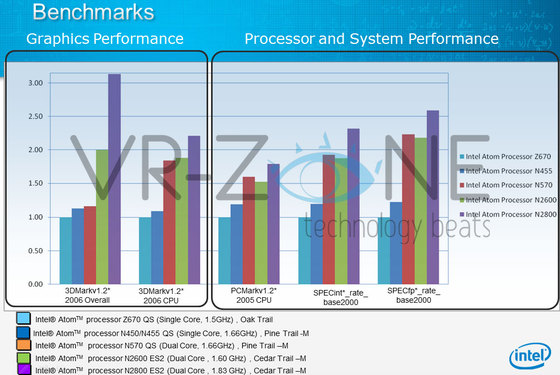 Starting off, the graphics performance has tripled with the Atom N2800 with the use of the much faster PowerVR graphics engine in comparison with the old GMA 950 that we used to see from Intel’s 945 chipset launch. The GPU’s have also been clocked three times faster than before, so the performance is more what expected. On the other hand, the slower N2600 has its graphics performance doubled as well.

The benchmarking was done on 3D Mark 06 that seems to be an outdated benchmark for the new chips even though they have support for DirectX 10.1 (Maybe they avoided later releases of the benchmark tool particularly due to issues in getting it’s DirectX 9 drivers certified by Microsoft).

Next up ahead comes CPU performance and there is an improvement but not much between the Pine Trail N570 and the Cedar Trail N2800 rather a slight improvement over the previous gen. One thing odd to notice here is the N2600 is falling behind in all but the 3DMark06 CPU test when its running at the same speed as the N570.

Intel’s new CPU’s are good enough in terms of being energy efficient when compared to AMD’s Bobcat based APU’s. But then again Intel has more of the market share so the transition of Intel users onto AMD may be not be happening overnight.