Intel’s SoFIA Chipsets For Smartphones To Be Released This Year

Intel might have a commanding lead in the desktop, laptop and server processor market, but it’s a whole new ball game altogether when the tech firm locks horns with the likes of Qualcomm and Samsung and their formidable mobile SoCs. In order to take the fight to the major league players of the mobile chipset market, Intel is planning to launch its SoFIA SoCs during this quarter. Thanks to its partnership with Rockchip, it appears that the company will finally be able be make a prominent dent in the market. 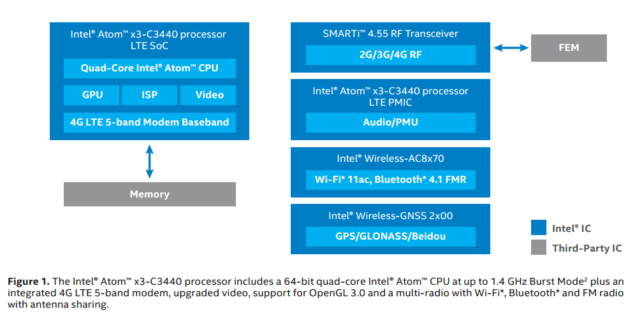 Intel Atom x3 Will Be Powering Budget Based Handsets

Earlier, Intel had announced that its upcoming iteration of SoCs, which are named as x3, x5 and x7 will be powering up smartphones in the near future. Out of all the three products, x3 will definitely be powering up those devices that will be carry an affordable price tag, while the remainder of SoCs are going to power high-end products. Coming to the entry level SoC, Atom x3 will be launching in three variants, out of which two of them will be possessing 3G modems with dual-core and quad-core processors. Out of the three models, the highest performing one will be Atom x3-C3440, which will feature a quad-core CPU along with a powerful LTE modem and better performing graphics chip.

According to the specifications of the entry-level Atom x3-C3130, the SoC is going to be incorporated in to cheaply priced products, because Mali 400 MP2 graphics processor coupled with LPDDR2 type RAM will most be present in anything higher than a device rendering the 1280 by 800 resolution. However, side by side, Intel’s Atom x3-C3230RK possesses much more kick compared to its lower performing variant and will most likely be fitted in to products that will possess a 1080p display. Furthermore, the chip will be sporting four cores that are going to be clocked in at 1.2 GHz, along with a Mali 450 MP4 graphics chip and DDR3L type memory. 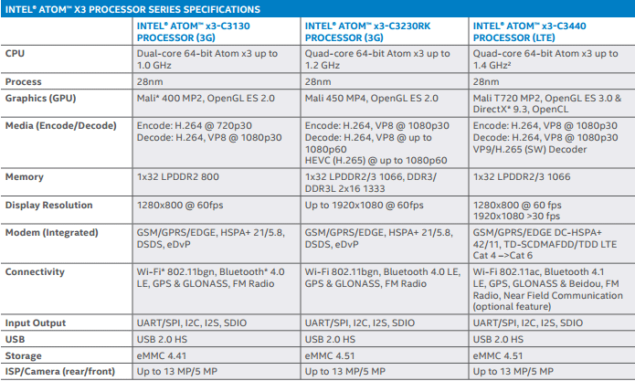 After comparing all the chipsets, it appears that the Atom x3-C3440 is probably the only one that is going to feature LTE connectivity coupled with Wi-Fi and Bluetooth modules supporting the latest standards. First generation SoFIA chips are expected to be fabricated on the TSMC 28 nm process, which is fairly surprising since it's a step back from Bay Trail, since the former is manufactured on Intel's own 22 nm process. However, it should be kept in mind that Intel will be attempting to score heavily on the entry level market, seeing as how majority of tech companies are targeting that segment of the mobile industry for garnering significant amounts of revenue.