Mesa, the open-source Open GL and Vulkan driver, recently saw a commit submitted, showing that Intel has a slimmed-down silicon version called DG2-448. This model has previously been seen to "verify pixel pipeline optimizations introduced to the driver." The particular patch, published by Francisco Jerez, a member of Intel's Open-Source Driver Team, also came with the following description— 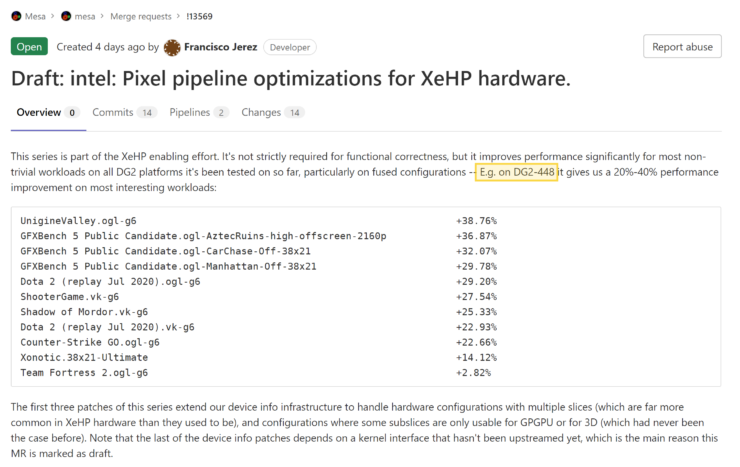 This patch basically confirms that a 448 EU version of the full-fat 512 EU DG2, exists. Whether it will see the light of day as a commercialized product however, is anyone's guess.

As you can see, it was shown to offer the same performance as the GeForce RTX 3070 GPU. However, the Twitter user did not disclose the specific benchmark used to compare the two.

The Intel DG2-512 GPU should measure about 396mm2 which makes it bigger than the AMD RDNA 2 and NVIDIA Ampere offerings. The Xe-HPG architecture-based chip might be the flagship but in terms of performance, it should be competing against the RTX 3080 and Radeon RX 6800 XT. It's definitely not as big as the flagship GPU offerings from either company but if we are to compare the high-end GPU category (Navi 22 / GA104), the DG2-512 is slightly bigger.

The new Intel Arc Alchemist series was announced to launch during 2022's first quarter. Unfortunately, as far as Intel's newest series, there have been less solid information to make a full probability from. The only two graphics cards from the Arc Alchemist line that have been revealed are the 128 executable unit and 512 executable unit versions.

The DG2-512 GPU will come in the BGA-2660 package which measures 37.5mm x 43mm. NVIDIA's Ampere GA104 measures 392mm2 which means that the DG2 chip is comparable in size while the Navi 22 GPU measures 336mm2 or around 60mm2 less. This isn't the final die size of the chip but it should be very close. NVIDIA packs in tensor cores and much bigger RT/FP32 cores in its chips while AMD RDNA 2 chips pack a single ray accelerator unit per CU and Infinity Cache.

A leaked information about a 384 EU variant has also been shown, but not completely revealed to the public. 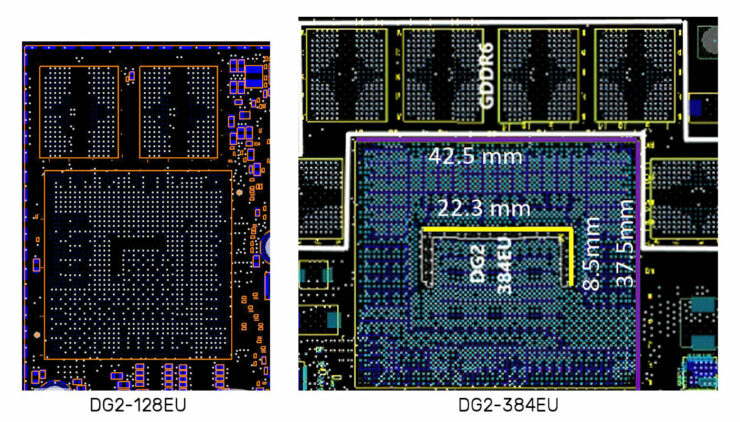 If Intel did intend to release a DG2-384 EU, it is possible we will hear about it in the upcoming first half of next year. However, if Intel canceled the 384 EU model, then it is speculated that they would "try to sell partially disabled chips as lower-end models," reports VideoCardz. Having a mid-range option that utilizes 448 EUs—3584 shading cores—would be a great choice for users with an estimated price range between $300-$400, especially if it holds up to the Navi 22/GA104 GPUs as speculated.