Intel's highly ambitious flagship GPU slated for 2021, the Ponte Vecchio, has come alive - and if the listing is to be believed, Intel is already five iterations in. A "working" filing in the EEC registry for the GPU was recently spotted by the usual suspects on Twitter (@Momomo_us). Interestingly Ponte Vecchio is referred to as an AIC or Add-In Card - meaning this is in the standard AIC (think of your current GPU) form factor as opposed to a test board.

The filings also show a very interesting trend. They start with a Pre Alpha version of Ponte Vecchio then steadily increase from GAP"V2" all the way up to "GAP"V5". Make of that what you will, but it looks like Intel is making steady progress and is already 4 iterations (Pre Alpha, GAPV2, GAPV3, GAPV4 and GAPV5) in from the pre-alpha prototype. I tried to deduce as much of the nomenclature as I could and I will leave the rest to the enterprising sleuths in our readership. 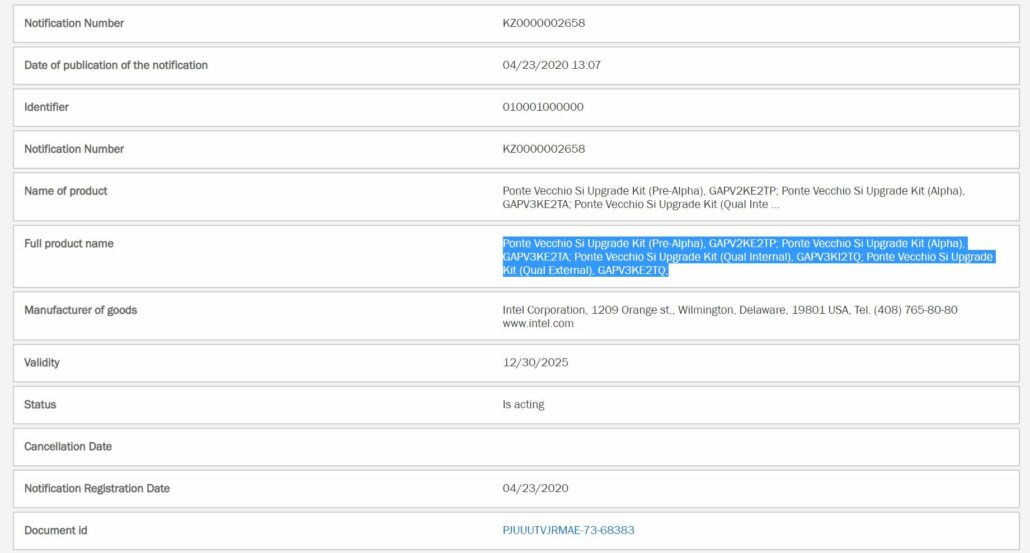 I am pretty sure GAPV5, for example, stand for Graphics, Alpha, Ponte Vecchio Version 5.0 but the rest I am going to leave up to the enterprising nomenclature sleuths in our readership (if someone manages to decrypt the full nomenclature please leave it in the comments!). Before we go any further, here is the text of the filings in question:

Intel's Chief Architect, Raja Koduri has previously referred to the Xe GPU they were building as "the father of all GPU". Considering Ponte Vecchio is the enterprise-class GPU aimed at building exascale supercomputers, and a successor of the current Xe HP line, it is clear that this is going to be even more powerful than the "father of all" GPUs.

Intel's Ponte Vecchio GPU will have high double-precision FP throughput as well. The company also further mentioned all the other segments that Xe GPUs will be operating in including HPC/Exascale, DL/Training, Cloud GFX, Media Transcore Analytics, Workstation, Gaming, PC Mobile and Ultra Mobile. WhyCry mentions that Intel is planning to reveal more details about its upcoming 7nm based Xe GPU 'Ponte Vecchio' on November 17, 2019.

I did a bit of googling and the codename turns up several Linkedin job listings including the word "Ponte Vecchio" along with the already-known codename "Arctic Sound":

This not only shows that Ponte Vecchio is something Intel has been working on for a while now, but also indicates that P.V is a derivative of the Arctic Sound GPU family - which was targetted directly at the Data Center. While you will have to wait for the 17th for the full disclosure according to VCZ, we can assume that this is going to be a bleeding-edge product that is not going to be aimed at gamers. Intel has also previously confirmed that their 7nm Ponte Vecchio GPU remains on track for Q4 2021 launch.