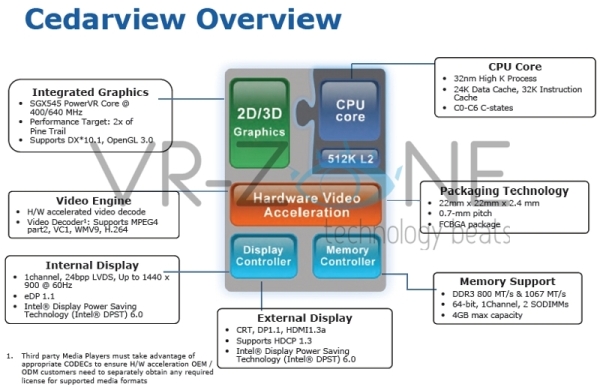 Intel has released an overview of its upcoming next generation Atom Based platform called "Cedarview". Intel's Atom based chips have always lacked behind due to poor graphics capabilities and with AMD Llano Fusion coming real soon which features outstanding graphical performance and lower power consumption as revealed through video demonstrations here things couldn't get worse for Intel in this section. However, The new Cedarview platform brings in some hope for the Atom platform as it would feature a faster graphics core than Intel's built in IGP solutions.

The new chips would not only feature a better graphics core but will also come in a smaller die package of 32Nm. The new graphics core is called "SGX545 Power VR" which will offer DX10.1 support and support common media formats, offers more advanced acceleration support. The graphics core is expected to offer twice the performance as compared to current gen graphics core of the atom based chips, For desktop usage the core would work at 640mhz and 400mhz for mobile atom usage. The core would also feature support for OpenGL 3.2 OpenGL 3.0.

Other good news include the addition of DDR3 rams with upto 4GM memory support however Dual channel would not be included. External display options will include Standard VGA port, Display port 1.1 and HDMI 1.3a Connector (Support for HDCP 1.3 is available). Intel Display Power Saving Technology (Intel DPST) would also be available.