Intel's Compute Stick is the blue chip giant's foray into the world of "micro" computers, or more technically correctly, dongles. The Compute Stick is a nifty little USB-flash-like device that turns HDMI enabled displays into a Windows or Linux based computer system. Complete with some very rudimentary specifications and an arguably reasonable price tag, the Compute Stick aims to be a revolution in the Internet of Things. 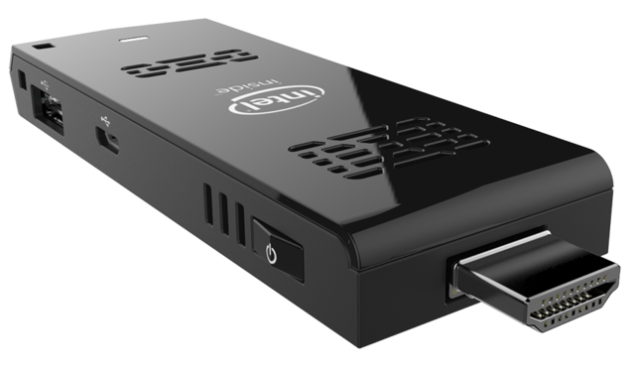 A stock render of the Compute Stick. @Intel Public Domain.

The device was introduced back in January at the Consumer Electronics Show in Las Vegas and marked one of the more significant expansions in Intel's product lineup. Raspberry Pi caused quite a storm upon its arrival and indicated to investors just how big a market there was for tiny computers. Since then, devices like the Google Chromecast have attempted to break the market and taste a bit of the Raspberry Pi's Pie (ironically). However, the Compute Stick would be the first device (to my knowledge) to actually allow running a full fledged Windows OS from a HDMI powered dongle.

It weighs less than 2 ounces and is powered completely by the HDMI port. The specifications are an onboard Quad Core Atom processor, 2GB worth of RAM, 32 GB worth of storage and even a microSD slot for memory expansion. The current pricing for the Windows version is a bit steep - you have to cough up around $150 for a Win 8.1 based device. On the other hand, the Linux Model costs only about $90.

Last month, the company announced its expected first quarter revenues, which was about $1 billion less than previously expected, so the arrival of the Compute Stick is one of the critical points for this financial quarter of Intel Corporation. The device could prove to be of good value to people who utilize cloud based apps and online video streaming services like Netflix apart from the standard Tech Enthusiast. It remains to be seen whether Intel has any plans for the device in the B2B and corporate sector. The Compute Stick has been listed on retailers like Newegg for pre order and the expected shipping date is 24th April - 1st May, 2015.