Intel's 5th generation broadwell processors are launching for the desktop market in mid-2015 as reported in a slide shown by chief reporter of HKEPC, Lam Chi-Kui. The slide does not provide any additional information but confirms that socketed processors will be available in the Broadwell lineup for the current LGA 1150 boards and will be launching in June 2015 which points to a Computex announcement. 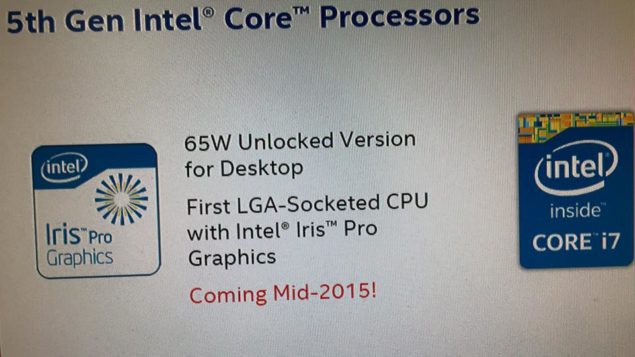 Intel's 5th generation, 14nm process based Broadwell is already available on mobility platforms and we have seen the Broadwell-Y (Core M), Broadwell-HQ, and Broadwell-U series chips in several devices. The next step is to bring Broadwell to the desktop platforms which will include two series, Broadwell-R which will be the soldered BGA chips and the C-Series (Unlocked) which will be launching as the socketed chips. Its quite surprising that Intel will be using the C-Series branding for socketed chips since this naming scheme is usually reserved for embedded chips but then again, we have seen some embedded platforms making use of socketed Haswell chips so the C-Series branding may apply to several compact (Mini-PCs/NUCs/AIO) and regular desktop designs.

The details mentioned aren't anything new from the slide officially shown by Intel months ago but the only thing that is new is the arrival date of these processors. Intel will have two socketed parts which will feature 65W TDPs and both will have unlocked designs and Iris Pro graphics which make use of embedded DRAM to boost up the graphics performance. These processors will feature faster graphics core which will allow better performance but is Iris Pro a reason enough to convince majority of Haswell users to upgrade to Broadwell?

Well, I'll speak the truth, the transition from Haswell to Broadwell on desktop front is not compelling enough for anyone to upgrade to these new chips just instantly. There are going to be just two chips in the product stack which are being aimed at a very specific market. You can see detailed specifications of those chips below but anyone who is currently using a Haswell unlocked or Devil's Canyon processor will probably find no good reason to upgrade to these chips. Anyone who is using an older platform might look at the upcoming Skylake processors and platform to spend their hard earned cash. So who are these processors aimed at? When Intel revealed these chips, they made a statement regarding Mini PCs and All-In-Ones which you can read below:

As you can tell, Intel wants these chips in compact platforms but this chip is also going in desktop platforms. Even majority of the users who get Broadwell CPUs to replace their Devil's Canyon or Haswell chips won't be using the faster graphics processors since they already have access to better discrete GPU solutions. But the limited platforms which include NUCs and AIOs can make good use of these chips and under a TDP of just 65W compared to what you will usually find on a BGA chip that makes use of a mobility iGPU. The other factor is that overclockers always need something new to achieve records and push for the best overclocks. These new processors would also keep the desktop side engaged on the Z97 platform till Intel finishes up their Skylake 100-Series platform for launch in Q3 of 2015.