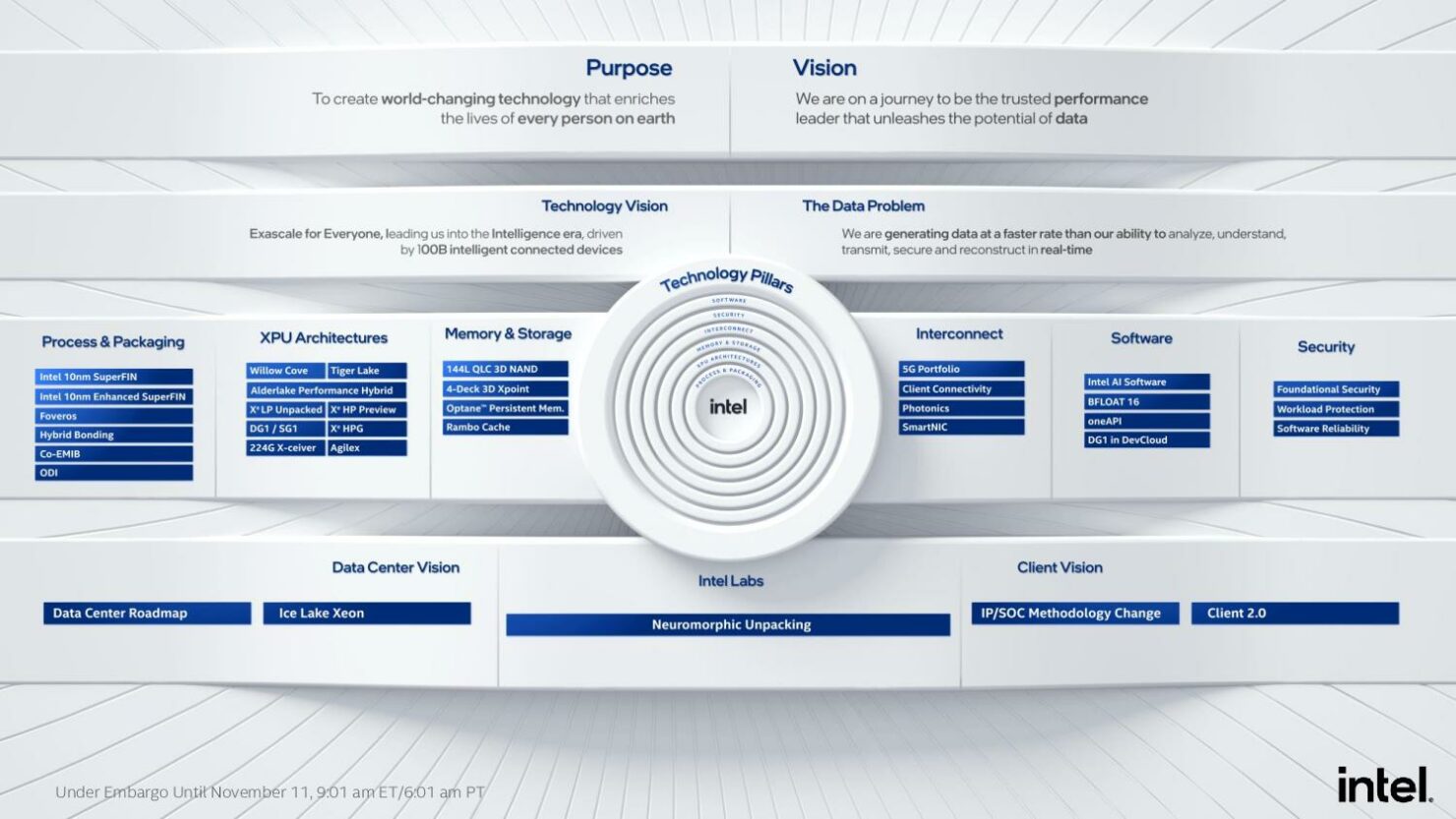 Intel recently held an XPU and software briefing for media and this article contains the full deck of slides and the complete newsbyte for our readers. Intel went over advancements in OneAPI (it goes gold in December this year), how their Xe GPU stack is coming along and a surprise announcement (and hard launch) of their Server GPU called H3C XG310.

The full slide deck for the briefing is given below:

The full press release is below:

What’s New:  Intel today announced key milestones in its multiyear journey to deliver a mix of architectures with a unified software experience. The company announced the gold release of Intel® oneAPI Toolkits coming in December, and new capabilities in its software stack as part of the Intel’s combined hardware and software design approach. Intel also debuted its first discrete graphics processing unit (GPU) for the data center, Intel® Server GPU, based on the Xe-LP microarchitecture and designed specifically for high-density, low-latency Android cloud gaming and media streaming.

“Today is a key moment in our ambitious oneAPI and XPU journey. With the gold release of our oneAPI Toolkits, we have extended the developer experience from familiar CPU programming libraries and tools to include our vector-matrix-spatial architectures. We are also launching our first data center GPU based on Xe-LP microarchitecture focused on the fast-growing cloud gaming and media streaming segments.”

Why It Matters: As the world moves into an era of billions of intelligent devices and an exponential growth of data, CPUs alone require a shift in focus to a mix of architectures across CPUs, GPUs, FPGAs and other accelerators. Intel collectively describes this as “XPU” vision. The launch of the Intel® Server GPU is another step to extend Intel’s offering in the XPU era.

This era of computing also requires a comprehensive software stack. Developers will be able to access a common, open and standards-based programming model across Intel® XPUs with Intel’s oneAPI Toolkits. They deliver on the performance potential of the underlying hardware and lower software development and maintenance costs while reducing risks associated with deploying accelerated computing relative to proprietary, vendor-specific solutions.

About the Gold Release of Intel oneAPI Toolkits: First announced at SuperComputing 2019, the oneAPI industry initiative is a bold vision for a unified and simplified cross-architecture programming model that delivers uncompromised performance without proprietary lock-in while enabling the integration of legacy code. With oneAPI, developers can choose the best architecture for the specific problem they are trying to solve without needing to rewrite software for the next architecture and platform.

Today Intel announced that the gold release of Intel oneAPI Toolkits will be shipping in December, available for free, locally and in the Intel® DevCloud, along with commercial versions that include worldwide support from Intel technical consulting engineers. Intel will immediately transition Intel® Parallel Studio XE and Intel® System Studio tool suites to its oneAPI products.

In addition, the Intel DevCloud, where developers can test code and workloads on a variety of Intel architectures, is expanding to include new Intel® Iris® Xe graphics hardware. Intel Iris Xe MAX graphics is now available for public access; and Intel Xe-HP is available to select developers.

In addition, the University of Illinois Beckman Institute for Advanced Science and Technology today announced the establishment of a new oneAPI center of excellence (CoE). It is using the oneAPI programming model to extend the life sciences application nanoscale molecular dynamics (NAMD) to additional computing environments. NAMD, which simulate large biomolecular systems, is helping to tackle real-world challenges such as COVID-19. This CoE joins others at the University of Stockholm (SeRC) who are focusing on GROMACS, and Heidelberg University’s (URZ), where they’re focusing on delivering oneAPI support to GPUs from other vendors.

The Intel Server GPU is based on Xe-LP microarchitecture, Intel’s most energy-efficient graphics architecture, offering a low-power, discrete system-on-chip design, with a 128-bit pipeline and 8GB of dedicated onboard low-power DDR4 memory.

By using Intel Server GPUs alongside Intel Xeon Scalable processors, service providers can scale graphics capacity separately from the server count, supporting larger numbers of streams and subscribers per system, while still achieving low TCO. Packaging together four Intel Server GPUs in H3C’s three-quarter-length, full-height x16 PCIe Gen 3.0 add-in card can support more than 100 simultaneous Android cloud gaming users in a typical two-card system and up to 160 simultaneous users, depending on the specific game title and server configuration.[2] Developers can leverage the common API in today’s Media SDK, which will be incorporated into the oneAPI Video Processing Library next year. Intel is working with various software and services partners, including Gamestream, Tencent Games and Ubitus, to bring the Intel Server GPU to market.

“Intel is an important collaborator on our Android Cloud Gaming solution. Intel Xeon Scalable processors and Intel Server GPUs offer a high-density, low-latency, low-power, low-TCO solution. We are able to generate over 100 game instances per two-card server for our most popular games, King of

The Xe-LP-based Intel Server GPU is now shipping. Along with the recently introduced Intel Iris® Xe MAX graphics, the GPU will improve the visual computing experience for users around the world as Intel ramps its Xe architecture products and software initiatives.

Linux is more prevalent is a key next step in its scalable Xe architecture strategy. Intel optimized the Linux driver to focus on code reuse between operating systems, it has increased focus on Linux 3D performance and it now delivers three fully validated and integrated distribution-ready stacks.

Intel today announced that the Intel® Implicit SPMD Program Compiler (ISPC) will run on top of oneAPI Level Zero, which provides low-level, direct-to-metal interfaces tailored to devices in the oneAPI platform and is the overall hardware abstraction layer. ISPC, powered by oneAPI, is a variant of the C programming language, which enables single program, multiple data programming and is used to accelerate Intel® OSPRay ray tracing engine on Intel CPUs. Intel is adding Xe support to ISPC to seamlessly accelerate Intel oneAPI Rendering Toolkit components such as OSPRay.

What’s Next: At the virtual oneAPI Developer Summit, Nov. 12-13, innovators, researchers and developers are showcasing 40 collaborations and projects using oneAPI. Topics range from computational drug repurposing testing for COVID-19 to predicting crop yields. At SuperComputing 2020 starting this week, Intel, along with industry leaders and research organizations, are highlighting using oneAPI and oneAPI tools through a keynote, tech sessions, fireside chats, demos and other activities. Complete information about Intel’s presence at SuperComputing 2020 is available on Intel.com.

Intel oneAPI and graphics software stack updates and the debut of the Intel Server GPU mark monumental steps in Intel’s journey toward XPU architectures. These developments set the foundation to deliver more meaningful experiences through Intel’s six pillars of technology innovation and heterogenous architectures that will be enabled through an open standard-based unified scalable software abstraction layer in oneAPI.

[1] TCO analysis is based on internal Intel research. Pricing as of 10/01/2020. Analysis assumes standard server pricing, GPU list pricing and software pricing based on estimated Nvidia software license costs of $1 per year for 5 years.

[2] Performance may vary based on the specific game title and server configuration. To reference the full list of Intel Server GPU platform measurements, please refer to this link on Intel.com.