An interesting entry in Sisoft Sandra was spotted by TumApisak. It looks like someone ran a dual Xe LP setup clocked at 1.25 GHz. Intel has not revealed any plans for a dual GPU setup using Xe LP so it is a bit surprising to see this particular entry. It is even possible that Sisoft Sandra is incorrectly reading Gen13 (Xe HP) dual tile GPU here but for the purposes of this article, we will not speculate on that front and assume the information read by Sisoft is accurate.

According to the Sisoft Sandra read, this is a dual GPU using Xe LP cores each with 96 EUs. This translates to a total core count of 1536 clocked at 1.25 GHz. The clock rate indicates this is an engineering sample and probably run from somewhere deep in Intel's labs. It is also almost certainly not the final clocks and we can safely expect this to be atleast 1.5 GHz for a dGPU making for almost 4.6 TFLOPs of compute - which if priced correctly, is a pretty good entry level GPU.

We have a feeling that Intel is taking the MCM approach seriously and where dual GPU was previously reserved only for high end applications, will become a part and parcel of the entire strategy for GPUs. This might actually be a validation platform for the Xe HP architecture that is coming later. It might even be the Xe HP 2-tile GPU itself with Sisoft Sandra incorrectly reading the architecture. 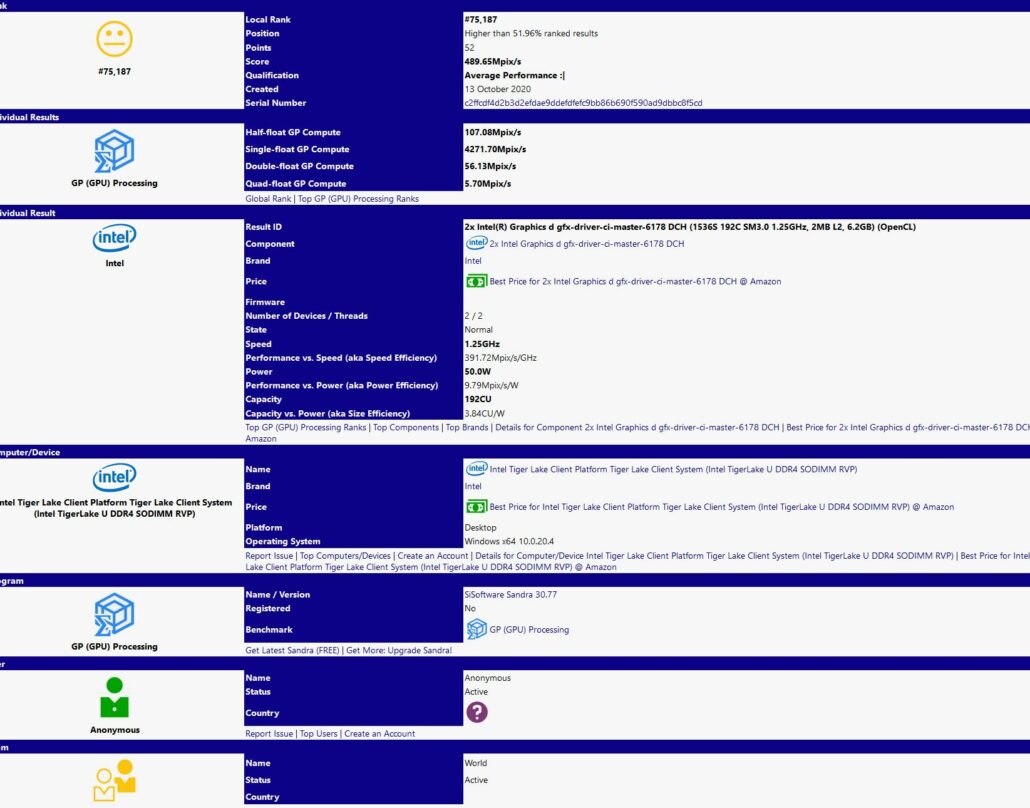 If that is the case then we are actually looking at 512 EUs per tile (and not 96EU per tile) or 4096 cores total - which is much more closed to a mid-range gaming card that Intel had promised would be landing sometime in 2020. That said, the probability of this being a misread is pretty low considering it gave details about the EU count so we are almost certainly looking at some sort of validation platform before Intel moves on to Xe HP.

We are sure that the raw performance numbers of NVIDIA's Ampere lineup has something to do with this change in plans. With Ampere offering twice the shading performance of last generation, both Intel and AMD would have to step up their game - particularly for future cards in order to stay competitive. The tweet was deleted - which usually lends credence to the validity of the information but we would still urge a slight pinch of salt because this decision is still in its evaluation stages. The now-deleted tweet by Raichu :