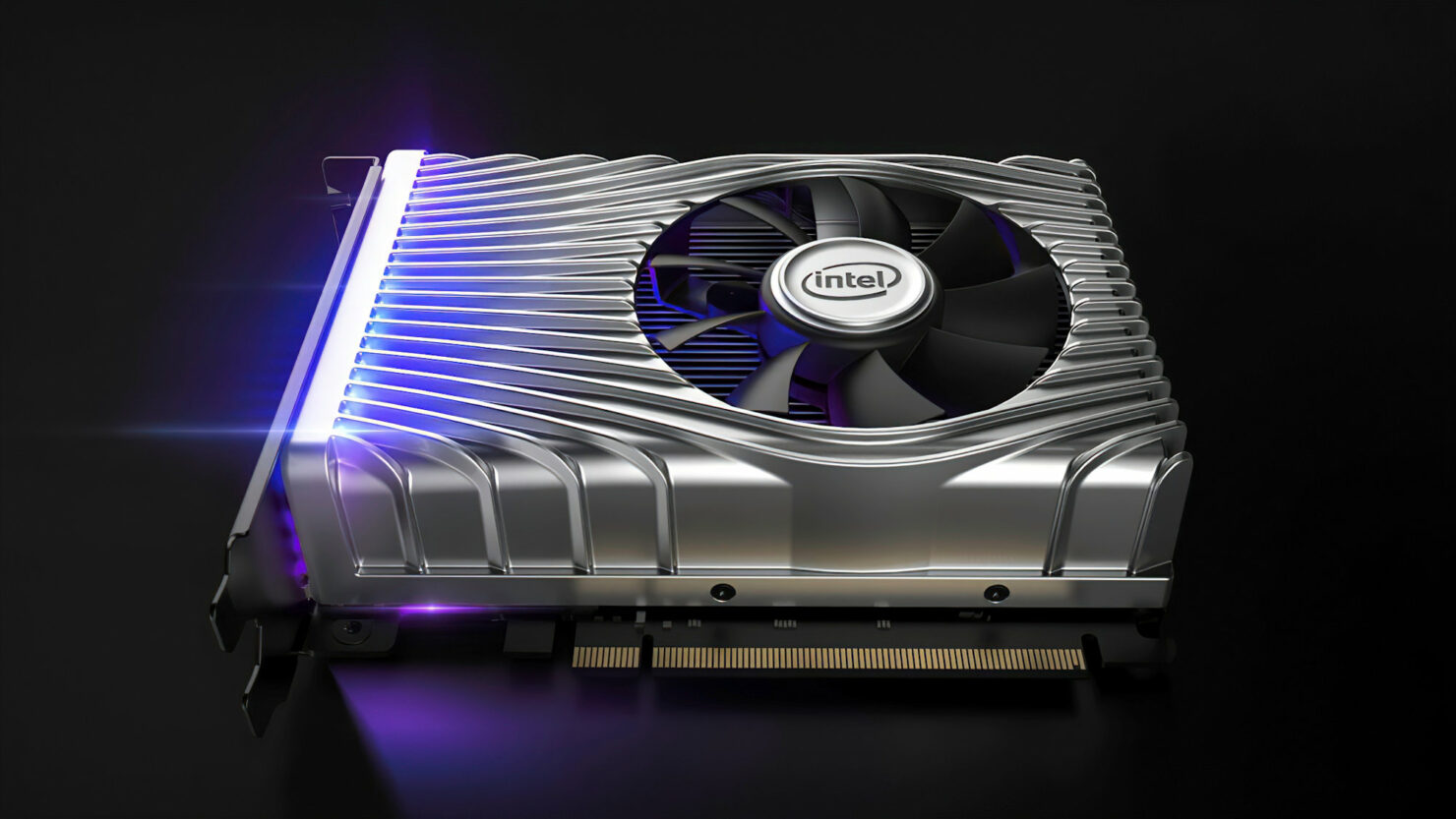 The Intel Xe DG1 GPU has once again surfaced in several OpenCL benchmark tests. The tests give us an early look at what to expect from the Xe-LP architecture which would be powering the first wave of discrete mobility GPUs featured on the 11th Generation Tiger Lake processor platform.

The Intel Xe DG1 GPU is based on the Xe-LP (Low Power) architecture that is optimized for mobile platforms such as notebooks and laptops. The first wave of Xe DG1 GPUs will be featured alongside the 11th Generation Tiger Lake CPUs which are planned to arrive by the mid of 2020. We are super close to the launch of Tiger Lake CPUs considering the mid of 2020 is around the end of June and the start of July.

Recently, an Intel Xe DG1 GPU was spotted with key specifications which included 96 EUs (standard configuration for Xe-LP discrete GPU), 768 cores clocking in at around 1500 MHz for a total single-precision Compute output of 2.3 TFLOPs. There's also 3 GB memory which could be featured along a 96-bit or 192-bit bus interface. A 96-bit bus interface is more likely considering the card houses a low-tier chip in a very compact form factor. Other details such as texture units and ROPs have not been revealed but we will definitely get more information close to its launch.

As for the performance, Videocardz (via TUM_APISAK) managed to get hold of both Geekbench and CompuBench OpenCL test results for the Intel Xe DG1 GPU. The GPU was compared against AMD's and NVIDIA's entry-level discrete graphics cards which include the AMD Radeon RX 5500 XT and the NVIDIA GeForce GTX 1650. In performance results, the Intel solution was outpaced by both cards & there's a reason for it being so. 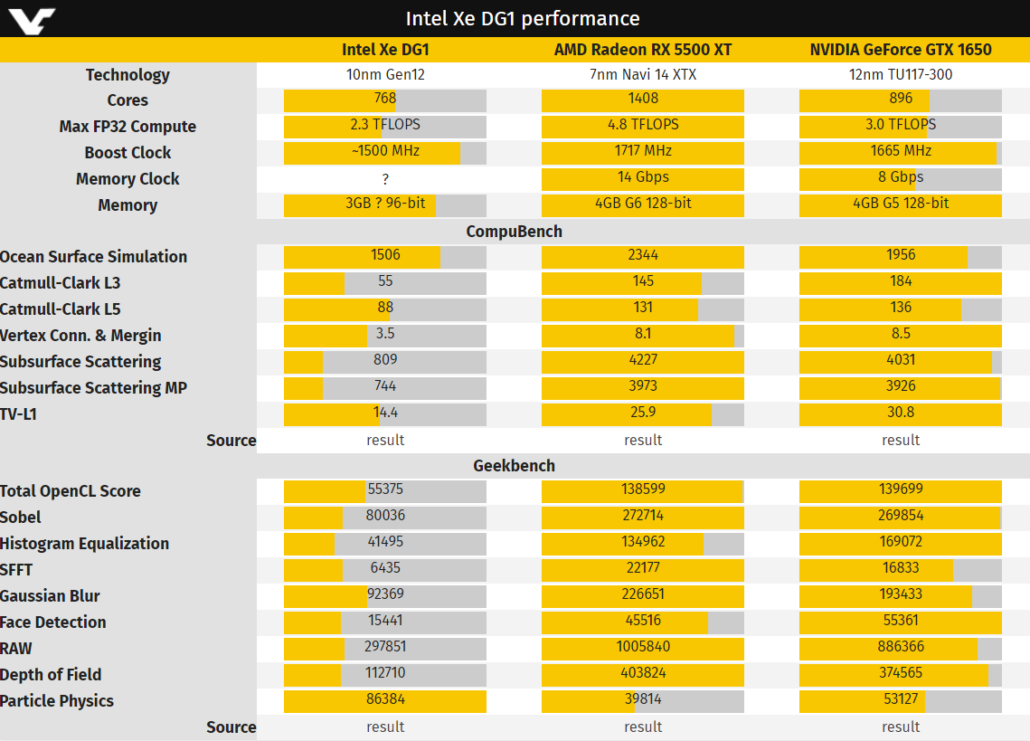 ARNL has confirmed this by stating that Xe DG1 GPU is part of the low power (LP) series and is not a high-end product. The GPU will be used in the laptops with the discrete GPU integrated onboard the motherboard while the PCIe graphics card is only for the SDV kit & not an actual retail product. 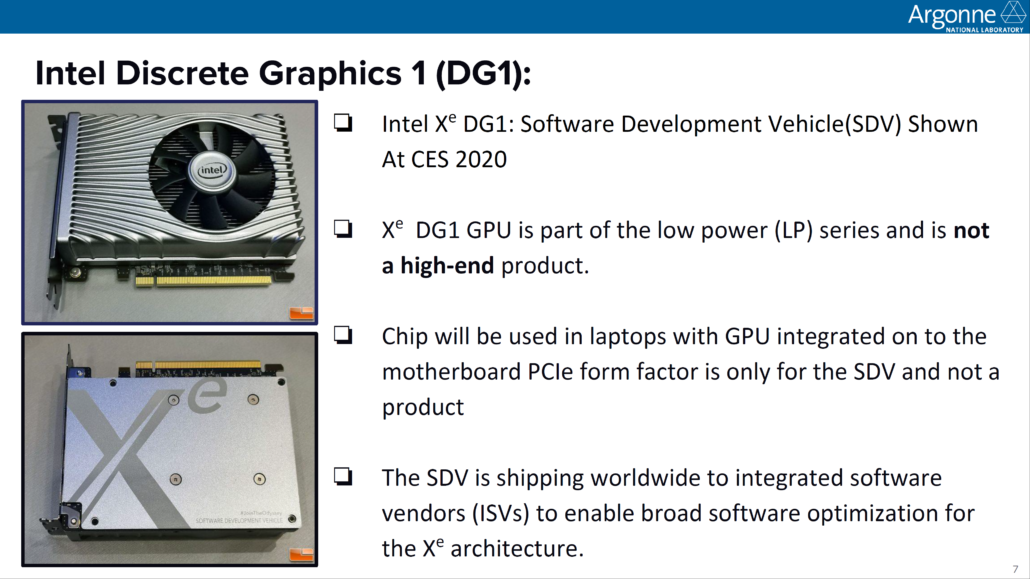 The main competition of the Intel Xe DG1 GPU would be NVIDIA's MX series and AMD's 7nm Vega GPUs integrated on entry-level AMD Ryzen 4000 & Intel 10th Gen CPU based notebooks as their standard GPU option. While not on par with the discrete graphics cards from NVIDIA or AMD, the Xe-LP GPU aims to tackle discrete/integrated MX/Vega series GPUs by offering more performance at increased efficiency and with a more optimized product stack at launch. We have already seen up to 40% better performance than AMD's 7nm Vega GPUs featured on Ryzen 4000 'Renoir' CPUs

Intel has also released its first Xe GPU optimized drivers which show that they are very serious in getting its first discrete tier GPU launch right as the first impression matters a lot. In a couple of months, we will see the first Tiger Lake powered laptops with Xe DG1 class GPUs shipping inside them. We will definitely share more performance figures as we get close to launch.