AMD's Computex demo caused quite the drama as they pit Intel's 28-core Xeon 8280 against their own 64-core Rome CPU. Expectedly, Intel has responded with benchmarks of their own and claimed AMD was deliberately gimping the test results in the demo by not using proper NAMD optimizations. In fact, with the proper NAMD optimizations, and according to first-party Intel results, not only is the 8280 capable of scoring 30% more but their 56-core part destroys AMD's Rome chip.

You should always take first-party benchmarks with a grain of salt, especially show-opening benchmarks where the exact configuration is unknown, and that applies here as well; but to be fair to Intel, they have posted the exact configuration they used to run their benchmark suite. Still if you are someone that is going to make business decisions on this information, you should wait for third-party and independent benchmarks from the various review sites out there. 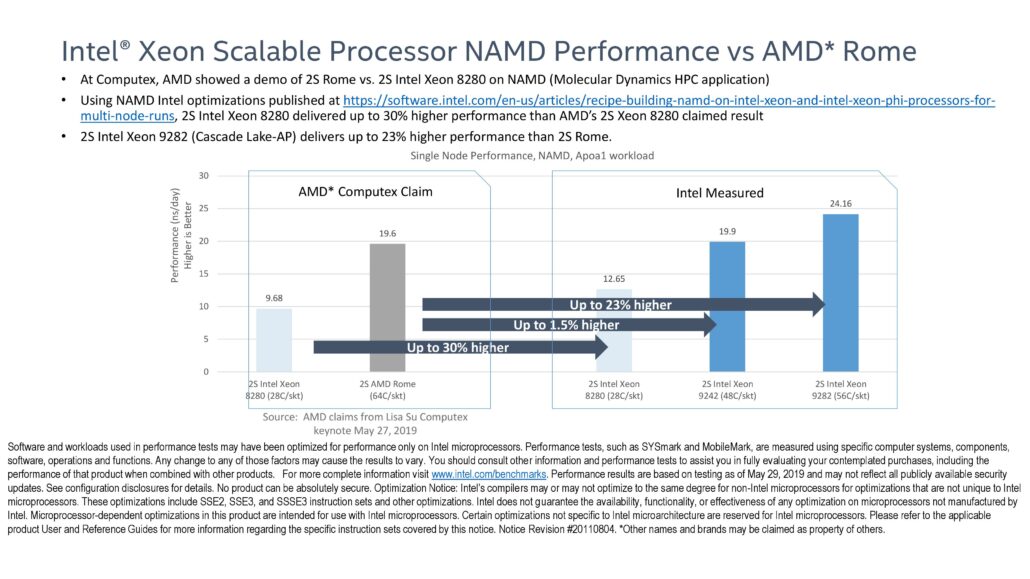 As far as I am aware, AMD did not release the exact configuration and compilers they used to run the demo at Computex, but in the interest of transparency, Intel has released the full details of the configuration used:

This is the second time the company has responded to the AMD Computex 2019 demo, and the reason is clear: servers are Intel's bread and butter and if AMD has that in its scope, its rival will expect will respond pretty aggressively.  The message Intel wants to send is clear: that they still have the performance crown and charge a premium for it. That said, I do believe that what the AMD demo truly showcases is a problem in pricing for Intel more than anything else. Considering these pricing levels were established back when AMD wasn’t competitive, they are now problematic and risky.

We have not seen any extensive TCO (total cost of ownership) analysis yet but those would be able to truly answer the question of which company takes home the economy crown. With its 10nm processors delayed by almost 2 years, the company has given up its process lead to pure play foundries like TSMC and Samsung, so caution would be very much advisable. At the same time, it will be very hard for AMD to break into the ecosystem that Intel has developed for itself, especially considering they are likely to take AMD much more seriously now.