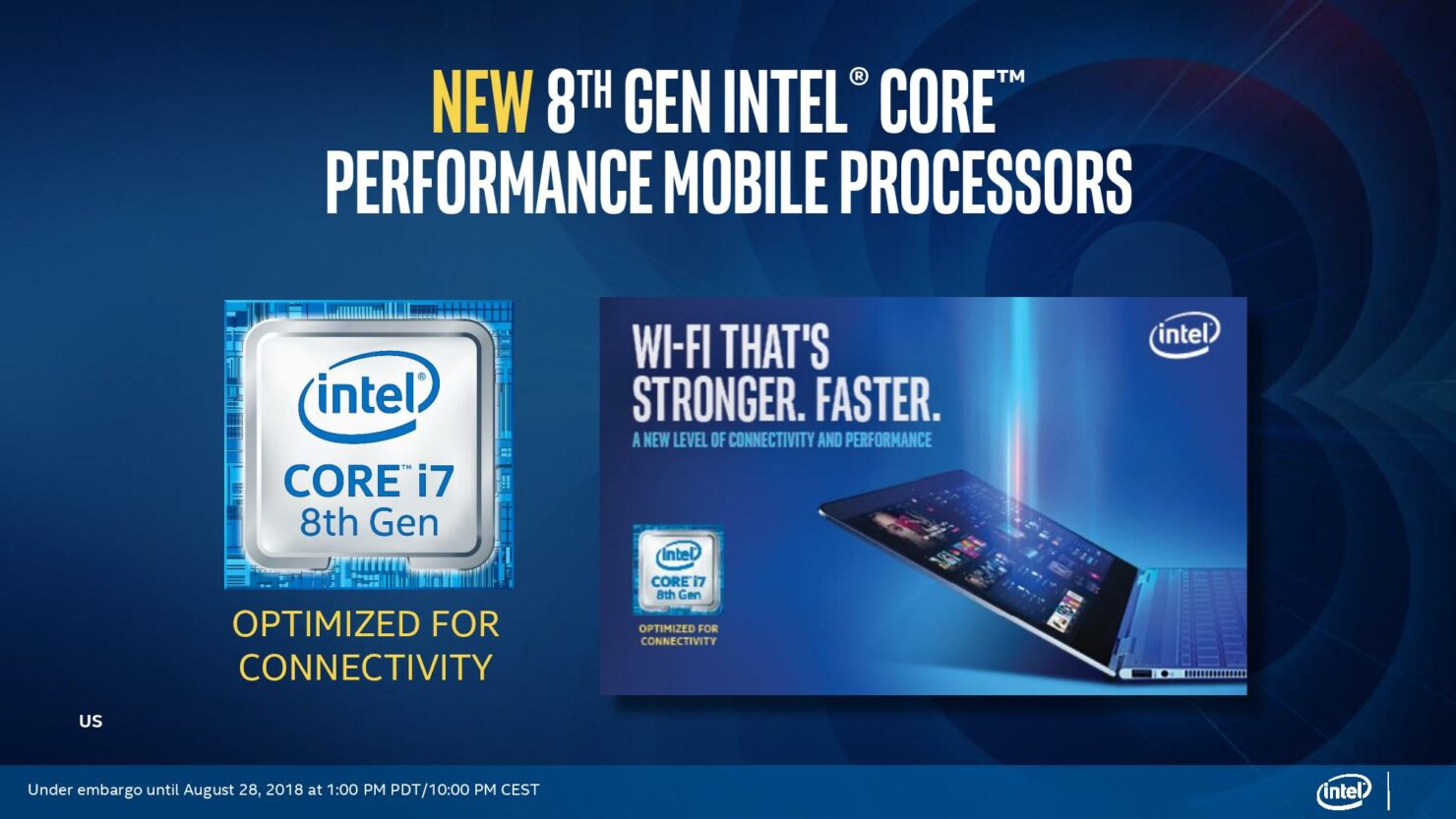 Intel has launched its brand new series of mobility processors under its 8th Generation branding. Codenamed Whiskey Lake, these new SKUs will provide multiple incremental upgrades over the former lineup - which was also called 8th generation. The company launched a total of 6 SKUs featuring Gigabit WiFi, improved clock speeds and more. It's worth noting that the primary indicator for Whiskey Lake when buying laptops is the newly designed "Optimized for connectivity" logo.

All the new Whiskey Lake-based 8th generation mobility processors are going to feature Gigabit WiFi as well as improved clock speeds thanks to better-binned die. On the security side, the CPUs are going to have mitigations against side-channel attacks like Spectre and Meltdown but from what I heard - these are going to be software only since they are based on the exact same architecture as before. Intel is also boasting over 16 hours of battery life on optimized laptops (at 200 Nits) which should allow you to leave your charger at home without worrying about the device dying on you mid-day.

The fact that Intel has managed to cram 4 cores clocked at a jaw-dropping 4.6 GHz with 8 threads while remaining within the 15W TDP limit is nothing short of amazing. The i7-8565U is going to be nothing short of miraculous in the mobility segment and should allow the production of laptops that not only punch high on the performance side but also have headache free battery life. Intel is offering Hyper-Threading with all SKUs ranging from 2 cores to 4 cores.

The U-Series consists of the Core i7-8565U, the i5-8265U and the i3-8145U. Hyper-Threading is present in all SKUs and only the i3 has the dual core design while both the i5 and the i7 have a 4-core design with the primary differentiator being the difference in clock speed. The Y-Series consists of the Core i7-8500Y, i5-8200Y and the m3-8100Y (the lowest end SKU). All of these parts are dual-core in design with 4 threads and only 5 Watt TDP.

The latest 8th Gen Intel Core i7, i5 and i3 (U-series) processors deliver the ultimate performance in a 15watt envelope with up to four cores and eight threads for mainstream laptops and 2 in 1s.

Other key features and capabilities:

The first 8th Gen Intel Core i7, i5 and m3 (Y-series) processors are balanced for mobility and deliver incredible performance that people expect from Intel processors in super thin-and-light devices with fast Wi-Fi and LTE connectivity.