Intel is preparing new Skylake-U powered NUCs for launch in second half of 2015, as revealed by FanlessTech. The website which has previously been accurate on Broadwell and Haswell based NUCs has now released the latest Intel roadmap showing two Skylake-U based NUCs codenamed "Swift Canyon" hitting retail in Q3 and Q4 2015.

The two NUCs coming from Intel include a Core i5 model "NUC6i5SYK/NUC6i5SYH" and a Core i3 model "NUC6i3SYK/NUC3i5SYH". There are no specifications listed on the slide aside from the feature support that show that the Core i5 model launches in Q4 2015 while the Core i3 model launches in Q3 2015. The report seems to confirm the previous reports of Skylake replacing majority of Broadwell processors in 2H 2015. Both NUCs are powered by Intel Skylake-U series chips that feature the Core i5-6***U and Core i3-6***U series naming schemes.

When it comes to design, the NUCs are small devices hence they feature SO-DIMM slots for DRAM support. In this case, we'll be looking at DDR4 SO-DIMMs that are going to power these devices. There will be a range of mPCIe and M.2 slots along with mini-HDMI and mini-Displayports for display output through the internal graphics processor feature on the Skylake processors. The Skylake processors are based on a Gen9 iGPU which is going to leverage overall graphics performance over Broadwell with increased clock speeds and execution units. Currently no model with Iris Pro graphics has been listed by Intel and those will only be unveiled with a Core i7 based NUC as is the case with Rock Canyon.

Further I/O offerings include 2 internal USB 2.0, 4 external SB 3.0 ports, an 8+2 channel audio jack and integrated LAN ports. Other include WiFi/Bluetooth integration with a mPCIe combo adapter, M.2 SSD expansion slot, SATA 3 6GB/s port, 2.5" optical drive bay, NFC integration and a replaceable LED. There's full support for 4K and triple display configurations. The NUCs are going to be one of many devices that will feature Skylake-U series processors. The Core i3 and Core i5 models will be dual cores while the Core i7 model will be based on a dual core design and feature multi-threading support.

The Intel Skylake-U series will replace the Broadwell-U series processors which currently has the Core i7-5500U as the flagship part. The lineup will get three processors, Core i7-6500U, Core i5-6200U and Core i3-6100U in September 2015 and Core i7-6600U, Core i5-6300U in January 2016. All of the processors are dual core models and specifications are not know at the moment in regards to clocks speeds, TDPs and graphics unit but the Core i7-6600U will be the flagship part of this lineup which are aimed at the main stream notebook devices.

Update: It looks like Skylake NUCs will feature Iris Pro graphics chips as revealed by Anandtech during their ASUS Computex 2015 event coverage. The ASUS NUC shown off at the event is powered by a 6th generation Intel Skylake processor that feature Iris Pro graphics and this can indicate that we will see a large influx of NUCs featuring these powerful integrated graphics chips. 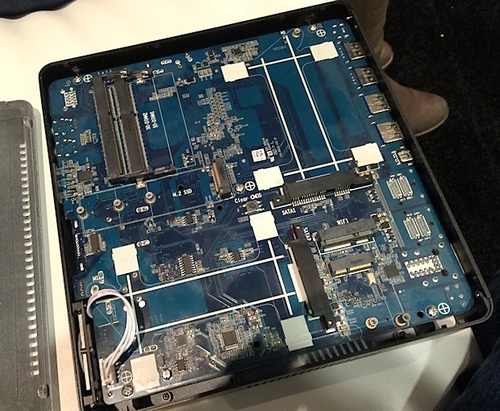