A few weeks ago, specifications of Intel's Broadwell-U series lineup were leaked which detailed the HD Graphics 6100 series chipset codenamed Iris. Being the flagship iGPU chip of Intel's Broadwell lineup, the GT3e chip will be replaced by the more powerful GT4e when Skylake hits the market later next year. 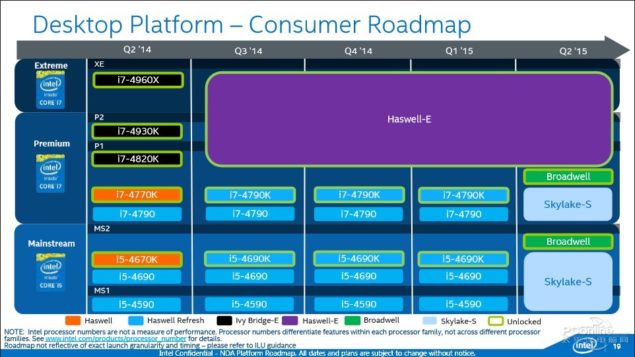 The information comes from Zauba (via Computerbase) who had listed several of Intel Skylake series chips in a shipping manifesto along with some key details of the processors. Previously, Zauba has given details of a few NVIDIA graphics cards related to GK110 and GM204 which turned out to be accurate so let's get on with the details. As we previously detailed, Broadwell will feature four iGPU configurations which include GT1, GT2, GT3 and GT3e.

While Broadwell has already launched with the Core M "Broadwell-Y" series processors, the real chips will start shipping at CES 2015 where Broadwell-U series will enter the market. Broadwell K-Series is being planned for a Q2 2015 launch but at the same time, Intel has announced Skylake-S series which will be available to consumer market featuring lower TDPs. The Skylake-S series chips will be part of a diverse desktop and notebook based platform but being based on a 14 nm process node, Skylake processors would feature a new architecture along with several CPU and GPU side enhancements whereas Broadwell is meant to improve upon the architecture which was first introduced on Haswell processors. The following chart shows the main differences in the next generation Skylake processor configurations:

Aside from all these details, the SKUs for Skylake have also been confirmed along with their TDPs. The desktop variants will have six different variants which will include the flagship 95W Quad Cores with GT2 and GT4e GPU while the lowest 35W TDP variant will feature Dual Cores and GT2 graphics. The H-Series lineup will also include the 95W Quad Core with GT4e graphics chip but that’s the only flagship chip followed by 65W, 55W and 45W Quad Core variants with a mix of GT4e and GT2 graphics. This H-Series doesn’t seem to include a dual core model at all. The U-Series lineup will have TDPs of 25W and 15W with the flagship part featuring Dual Cores and GT3e graphics while the other models consist of GT2 graphics. Last up is the Y-Series Skylake lineup featuring two SKUs, both featuring 4.5W TDP and 2 Cores plus GT2 graphics.

Broadwell will stick to the LGA 1150 socket and remain compatible with current 9-Series chipset motherboards while Skylake will shift focus to the next mainstream chipset known as the Z170. The chipset will feature up to 20 PCIe Gen 3 lanes, 6 SATA Gen 3 ports, 10 USB 3.0 ports and a total of 14 total USB ports (USB 3.0 / USB 2.0), up to 3 SATA Express capable ports, up to 3 Intel RST capable PCI-e storage ports which may include x2 SATA Express or M.2 SSD port with Enhanced SPI and x4/x8/x16 capable Gen 3 PCI-Express support from the processor. Aside from that, we know that the Skylake processors would be compatible with the latest LGA 1151 socketed boards and Z170 chipset which is part of the new 100-Series chipset replacing the 9-Series “Wild Cat” PCH. The second most interesting thing covered is that Skylake processors would have both DDR3 and DDR4 memory controllers so the different SKUs can be configured to use either of the memory type.

The difference between them is not clearly mentioned however we think its related to clock speeds. You can get a better representation of the variants in the following chart: