The latest Intel Rocket Lake-S Desktop CPU benchmarks have leaked out too which showcase CPU performance on par with the AMD Ryzen 7 5800X based on the 7nm Zen 3 core architecture. The latest benchmarks were leaked by TUM_APISAK and show the chip running on an HP Omen OEM desktop PC which also suggests that OEMs and partners already have early access to Rocket Lake which launches in early 2021.

Once again, the platform the Intel Rocket Lake CPU was tested on is an HP OMEN 30L Desktop GT13-0xxx which features the HP 886C motherboard. This is an HP exclusive motherboard and runs the LGA 1200 socket which will support Intel's upcoming 11th Generation Core processors.

As for the chip itself, the Intel Rocket Lake CPU, presumably the Core i9-11900K, features 8 cores and 16 threads. This should be the top SKU since Rocket Lake maxes out at 8 cores. The chip has 16.0 MB of L3 cache, 4 MB of L2 cache, and clock speeds are reported at 3.40 GHz base and 5.00 GHz boost. Within the Geekbench 5 data, it is reported that the boost clock was functioning fully normal as all cores were running at around 5.0 GHz clocks. 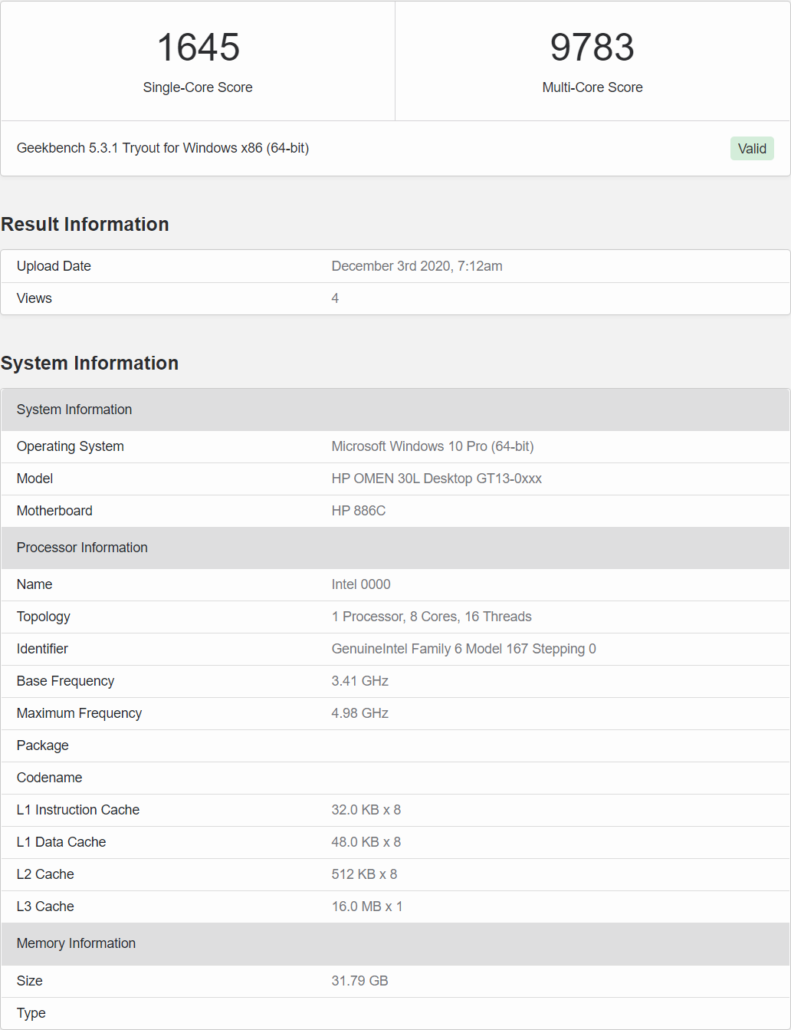 Coming to the performance, the Intel Rocket Lake CPU score 1645 points in the single-core and 9783 points in the multi-core tests. If we were to compare these results with AMD's fastest 8 core and 16 thread Zen 3 offering, the Ryzen 7 5800X, we will find that the score is about on par with the competition. The Ryzen 7 5800X scores 1661 in single-core and 10367 in multi-core on average. Since these aren't the final clock speeds for the Rocket Lake CPU yet, we can expect the 11th Gen family to be just slightly faster than the Zen 3 based Vermeer family.

Compared to its predecessor, the Core i7-10700K, the Rocket Lake CPU is 21% faster in single-core and 9% faster in multi-threaded tests. The Core i9-10900K is 17% slower in single-core but slightly faster at around 12% than the Rocket Lake CPU due to its higher number of cores and threads. It looks like 14nm will result in a higher power draw and higher temperatures than the competition so while Intel may have a slight price advantage, they will lose big on the efficiency numbers as has been the case against Ryzen for several generations starting Coffee Lake.