Intel is readying their Skylake 6th generation microarchitecture which will make use of new CPU and GPU cores. Launching in August at IDF15, Skylake processors will leverage performance in applications that range from standard work loads to high-end gaming and even fulfill server/workstation demands with professional Xeon parts. While the processors are known for their core performance improvements, Intel has gained a huge performance increase in the graphics department with their recent Iris and Iris Pro graphics core and the same can be expected from the upcoming Skylake processors. 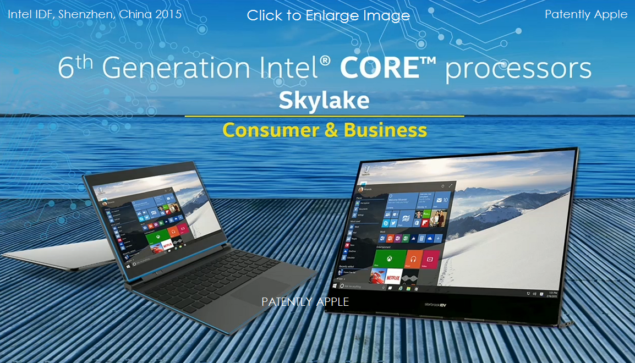 The numbers we have compiled today have been provided over at Compubench which lists down three new chips. We are looking at the Core i5-6200U processor with HD Graphics 520, Core M3-6Y30 with HD graphics 515 and lastly, an unknown processor with Iris Graphics 540. Now we know this in fact that Skylake will get several SKUs which include the Skylake-S (Desktop), Skylake-U (Ultra Low Power), Skylake-Y (Low TDP) and Skylake-H (High Performance Mobility) variants. All of these will feature several chips aimed towards various tiers based on their pricing, performance and power consumption.

The graphics chips which we have today are quite simple in terms of naming scheme as Intel moves away from a 4-digit (Alphanumeric) scheme to a three digit (Numerical) branding. We still get to see Iris and Iris Pro series branding which denote Intel's top brass in the graphics department that recently disrupted GPU performance records on iGPU (Integrated GPU) level with the Broadwell Iris Pro Graphics 6200 chips. Comparing these chips, we do get some hints at their specifications.

The Core M-6Y30 will be powered by the HD Graphics 515 iGPU that is the successor to the Core M-5Y31 which is part of the Broadwell-Y lineup that launched last year. The HD 5300 featured on the Core M-5Y31 is powered by 24 execution units and a clock speed of 300 MHz (Base) and 900 MHz (Boost) clock speeds. All Broadwell-Y Core M processors are based on the HD Graphics 5300 core which is the entry level iGPU chip but that will kind of change with Skylake-Y which will be getting GT1 and GT1.5 chips with 12 and 18 Execution units each that deliver better performance per core unit and faster clocks.

Finally we have the Iris Graphics 540 which is the successor to the Iris Graphics 6100. Note that these are not the Iris Pro variants being compared which feature higher execution units and clock speeds. The current Iris Graphics 6100 core features 48 Execution units, 1900 Million transistors and clock speeds of 300 MHz (base) and 1100 MHz (Boost). The Iris Graphics 540 will feature similar amount of execution units with faster clocks and a eDRAM cache of 64 MB. A faster GT4e graphics core is also confirmed which will be part of the Iris Pro Graphics 550 with 72 Execution units and 128 MB cache but we don't have any specific results for the chip. The performance of these chips can be seen in the pictures below but do note that they aren't represnetative of final performance nor do they showcase actual gaming performance you might expect from the processor it self. There are notable improvements from these chips which shows Intel did make some graphics architecture updates on Skylake platform.