Intel has a lot riding on its brand new Skylake processors - much more than meets the eye. For one thing, Intel had been pointed out as part of a receding market and one report even termed it as moving toward becoming a constituent of the "legacy silicon valley". The flashy overhaul of the packaging, the removal of the stock HSF are all part of the giant's attempts at cutting costs and attracting consumers to shift from whatever they currently own. In what appears to be an interesting twist, Intel's Skylake processors have run into what appears to be a global shortage due to unknown reasons. 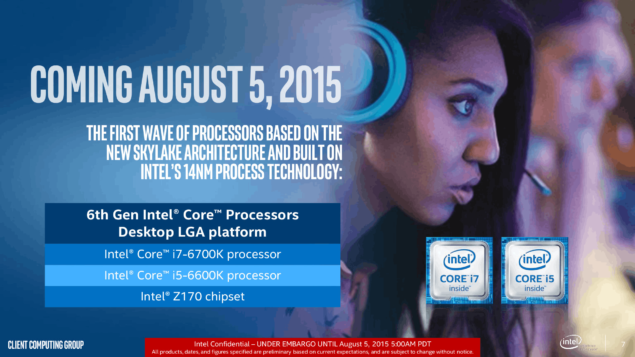 The report stems from the folks over at KitGuru and they appear to have received confirmation from both ASUStek and Intel itself about the ongoing supply issue.  The issue isn't just limited to desktop CPUs with unlocked multipliers, but the mobile side of things as well. While some of the models are available in the US many of the SKUs present in the lineup cannot be found anywhere. The European region however, seems to be facing a shortage problem of a much higher magnitude - but that is probably due to the time delay between a product launch and arrival on shelf.  As far as Broadwell goes, it appears to have been dead on arrival (as predicted) since many stores aren't even offering the product anymore and the major availability of said generation is in mobile only.

Intel's spokesperson, Daniel Snyder, also stated the following: “We are experiencing supply tightness due to strong demand and expect additional volume to be available as Q3 progresses”

So an AIB and a spokesperson from Intel itself have confirmed the existence of a shortage. Daniel also assured that Intel is planning to fix it very soon and the SKUs should be available in the following months. The obvious reasons that could be behind the shortage are: 1) The demand of Skylake is higher than anticipated and 2) Intel's 14nm process ramp has been rather slow and is leading to supply issues. The more subtle of reasons and one that could be entirely within the realm of possibility is that Intel is deliberately holding off volume supply to make sure that product seeding has occurred properly and enthusiasts have time to sell of their current rigs/luggables. This isn't something I would put past Intel and does make sense from a marketing and business perspective.

The report also states that It takes approximately 42 days (including customs) for a ship to reach Europe from Taiwan. Freight shipping time from Taiwan to the U.S. however, is around 20 days. This would mean that if Intel were to get supply back on track sometime in late September, it would take anywhere from 1 to 4 weeks for the chips to actually hit the shelves. It is stated that the notebooks will get retail availability in markets by November. Personally, I am inclined towards a slow 14nm ramp and Intel realising that it needs to squeeze this process for every last drop. The arrival of the intermediary platform Kaby Lake also hints towards the same, because by the time of Kaby Lake the 14nm ramp would have reached its peak and the process would be fully mature.