Intel recently unveiled its flagship Skull Canyon NUC device and it packs a hell lot of power in an incredibly tiny small form factor design. The SFF Gaming market is a niche but very lucrative market that OEMs are desperately attempting to get a foothold in. With Steam Machines already being sold to this market, Intel's brand new NUC is the tiniest and also probably one of the most flexible designs in terms of graphical power out there (thanks to AMD's external GPU or XConnect technology).

Intel’s Next Unit of Compute or NUC for short is, as most enthusiasts know, a very tiny form factor all-in-one PC – usually with a not-so-tiny price tag. The applications of these little powerhouses are diverse and can include anything from being the brain of a robotics project to high performance distributed computing. They can also act as the ultimate small form factor pc that can easily be hidden out of sight. While the compute or CPU portion of things was reasonably powered, the lack of a powerful iGPU posed quite an interesting quandary for more graphically intensive applications. With the inclusion of the Iris Pro 580 graphics in Skull Canyon (NUC6i7KYK) however, things are about to change.

The flagship Skull Canyon NUC is incredibly powerful. Not only is the in-house iGPU itself more than capable of running modern games at moderate settings but if you really want to step it up a notch then the tiny SFF PC fully supports AMD XConnect technology. Meaning you can plug in an R9 Nano if you find the iGPU lacking. The device is the ultimate in tiny SFF gaming (think hidden out of sight). Although the price tag is pretty hefty, it employs a fully tricked out Core i7 6770HQ - a 42W TDP beast that can handle all sorts of intensive modern day loads (and almost certainly high end gaming). Couple that with a dGPU upgrade via the XConnect enclosure and you have got some serious horsepower. The following list of GPUs are supported with the flagship Skull Canyon NUC NUC6i7KYK. 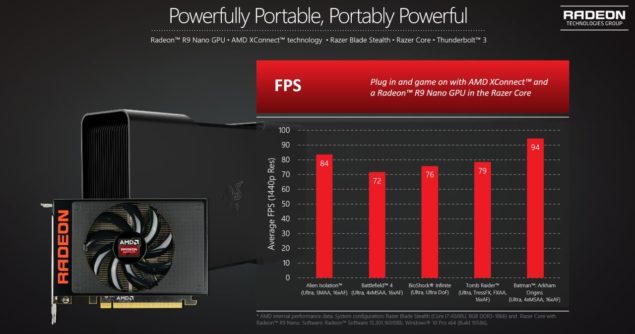 The Intel GT4e Iris Pro graphics are a Generation 9 core that ship with select Skylake parts. The ‘e’ at the end refers to eDRAM which the Iris Pro 580 has around 128MB of. The eDRAM acts as a fast L4 cache and facilitates the 72 Execution Units (EUs) present on the die. The core clock of the chip was 1 Ghz according to Intel’s marketing material, but this could change in the closed thermal envelop of the NUC. The chip is rated at a resounding 1152 GFlops of Single Precision or 1.15 TFlops. To put this into perspective, this is slightly above the Maxwell 1.0 debut graphic card: the Geforce GTX 750. This is also approximately equal theoretical horsepower to an Xbox One. While this is nowhere near the amount of horsepower a high end dedicated graphic card can pull, this is roughly double of what AMD’s Godavari chip can output. The performance of the Iris Pro 580 in Skull Canyon however, should be just enough to run modern titles at playable frame rates (medium-high settings, 1080p).