Intel's flagship Core i7 processor, the 975 Extreme Edition (reviewed here), is all set to be dethroned - if a certain leak on the website PConline is to be believed. 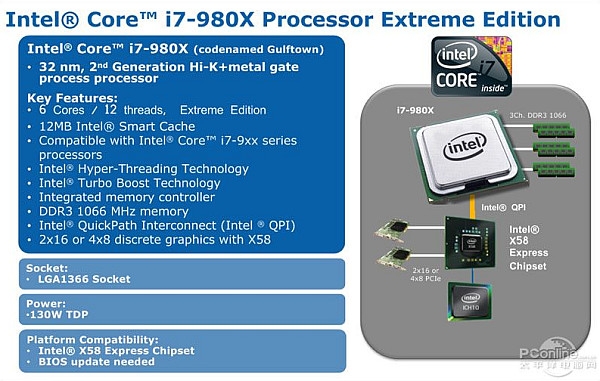 The first in the series of Gulftown processors; Core i7-980x will support six physical cores, allowing 12 simultaneous threads running, through HyperThreading. As for the specs: you are looking at a big 12MB cache, while the chip will be manufactured at the smallest manufacturing process going, at 32nm.

The picture in question didn't mention any price or clock-speed of the processor; but it would be safe to assume that it will hover around 3Ghz and the processor will retail at about US$ 1000. You should take note though, it won't stop eating into your kitty with that price. For at 130W TDP - it's going to be one energy hungry beast.

Most of your existing X58 motherboards should be able to support the new chip, albeit with a BIOS upgrade. And from what we know, Asus became the first motherboard manufacturer to have announced last week, support for this new chip.

P.S.
You can see one for sale, right here.