Intel beat their guidance from Q1 2019, but revenue falls 10% in the Datacenter group year over year.

Intel (NASDAQ:INTC) began their investor relations call today by announcing the logistics of their 5G modem division sale to Apple (NASDAQ:AAPL) . They made it clear that the sale would not affect their 4G modem department or revenues they receive as a result from it. Intel noted they expect their products to be used in the rollout of 5G through infrastructure including their networking products, with an expected 40% market share in the infrastructure markets they operate in. The sale is expected to move through regulatory approvals by the end of Q4 2019, for more information on the modem see our dedicated article. After taxes and cost of the sale, Intel is expected to realize a net gain of approximately $500M.

Intel saw a slight increase in revenue in their quarter up 1% YOY from Q2 2018. The company attributed this slight gain to a higher average selling price for their products despite shipping fewer products than the previous year. This higher average selling price was a result of two factors: introducing higher-priced CPUs in the consumer division (think 9900KS) and the shortage they experienced throughout the quarter in their small core CPUs such as Pentium and core i3. 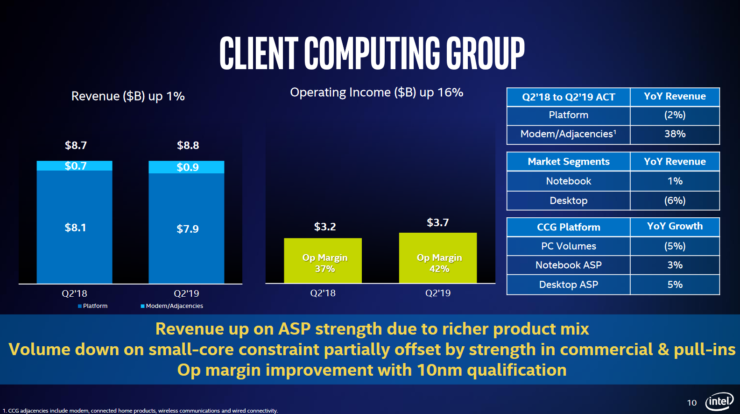 Intel saw a 10% decline in revenue in their datacenter group year over year at $5B compared to $5.5B in 2018. The biggest decline was in the Enterprise and Government market which Intel claimed was “Brutal” with a drop of 31% with the Chinese market being responsible for much of this. The rest of the data-centric group was down 1%, which includes IoT and Mobileye. Intel did note a higher average selling price in their server market, but very little information is made available about this due to the complexity of the contracts with customers.

It’s not uncommon for companies to not focus on competition in their earnings call. However, Intel attributed almost all their market share loss to their supply shortage rather than a more competitive AMD (NASDAQ:AMD). Interestingly in the Q and A section of the call, when asked about their market share trend Intel said they expect to return to a regular supply in Q3 which they claim will help them work their way back in the second half of the year (minute 30 in the web call). The Company then shifted the discussion on their competitive landscape to its entire product portfolio instead of individual segments.

Intel had again confirmed they are shipping 10th generation products to customers that include more features like WiFi 6 built into the chips. They expect products with these CPUs to launch in Q4 2019. Ice Lake chips have been qualified this quarter, but suffer from being at the “low end of the yield curve” currently as does their entire 10nm portfolio. Intel, although in a fine place financially has a well-documented struggle with their 10nm process and the supply issue in 14nm as a result of the delayed transition. The company finds themselves in a precarious position to defend different areas of their markets while having a supply shortage in the quarter at the same time as barriers to enter geographic regions were increasing.

The company did claim they were on track for 2021 for their 7nm products which will have roughly double the density of their 10nm products. If the tone of the earnings call was any indication, increasing yields in 10nm would benefit the company greatly both in the short and long term. The company had a relatively strong quarter financially issuing their dividend and their stock buyback with its value almost returning to the end of Q1 value. However, Q3 2019 is expected to be lower than Q3 2018 as well in terms of revenue and operating margin with the costs being attributed to delayed 10nm. 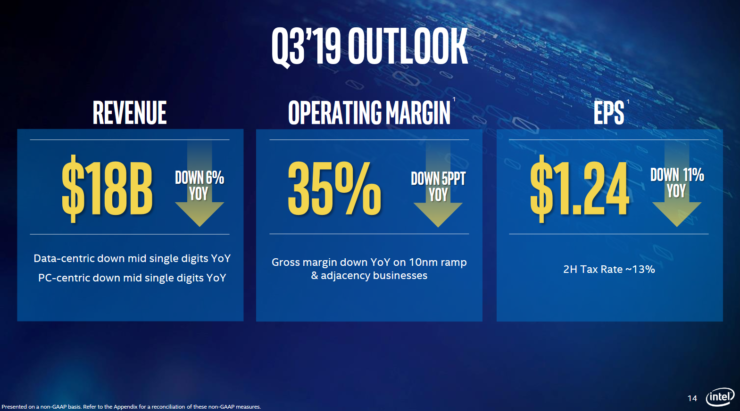 Intel stock is up 2% as of writing in after-hours trading, as they did beat their estimates and continue to keep their ASP high on their consumer and server products.