Intel dropped the bomb at the very end of their CES 2020 keynote, demonstrating their upcoming and next-generation products, the 10nm+ Tiger Lake CPUs and their first discrete graphics card based on the DG1 GPU, featuring the Xe architecture.

Starting with the start of the presentation, the 10nm+ Intel Tiger Lake CPUs. The Intel Tiger Lake CPUs will be based on the advanced 10nm+ process node which is an evolution of the 10nm CPU process, incorporated on Intel's existing 10th Gen Ice Lake processors. The new processors will also feature a brand new core architecture known as Willow Cove which would succeed the Sunny Cove architecture, also featured on 10th Gen Ice Lake processors.

First look and demonstration of the newest Intel Core mobile processors, code-named “Tiger Lake”: Tiger Lake is designed to bring Intel’s bold, people-led vision for mobile computing to life, with groundbreaking advances in every vector and experience that matters. With optimizations spanning the CPU, AI accelerators and discrete-level integrated graphics based on the new Intel Xe graphics architecture, Tiger Lake will deliver double-digit performance gains, massive AI performance improvements, a huge leap in graphics performance and 4x the throughput of USB 3 with the new integrated Thunderbolt 4. Built on Intel’s 10nm+ process, the first Tiger Lake systems are expected to ship this year.

During the conference, Intel stated that the Tiger Lake CPUs would bring advanced AI acceleration, discrete-level integrated graphics (powered by Intel's Xe architecture) and would deliver a double-digit gain over Ice Lake processors. Some of the new features which would be introduced on Tiger Lake processors would Thunderbolt 4, WiFi 6 with Gigabit Ethernet and much more. The integrated Xe graphics are stated to deliver a 2x performance uplift over Gen 11 GPUs featured on Ice Lake processors. In addition to the GPU side, Intel would also be adding the latest display technologies and next-gen I/O for the Tiger Lake platform.

Some of the new updates that the Willow Cove architecture would bring include a brand new cache design which we have already seen a glimpse of here, new transistor optimizations and enhanced security features on both software and hardware end which would mitigate the total performance impact from latest security updates while strengthening Intel's processor lineup against potential CPU-aimed vulnerabilities.

Not only did Intel state that they will have Tiger Lake shipping in various products later this year, but Intel's Executive Vice President, Gregory M. Bryant also held a Tiger Lake CPU alongside their reference motherboard PCB which is stated to be the smallest motherboard design they have ever created for a notebook. Intel showcased two variants of their Tiger Lake CPU, a Tiger Lake-U and a Tiger Lake-Y variant. They also showcased new laptop form factors that will be powered by Tiger Lake CPUs.

Get double the graphics performance over the prior gen. “Our most disruptive and advanced architecture yet” supercharges HD gaming on thin and light laptops. #CES2020 pic.twitter.com/va7q5LoRbu

Moving on to the discrete graphics side, we now know that DG1 is the name of Intel's first discrete tier GPU which would power their next-generation discrete graphics card. The DG1 GPU is based on the Xe graphics architecture which has been developed by Intel's Senior Vice President & Chief Architect, Raja Koduri.

Intel previewed the discrete GPU in Destiny 2 which was running at a very playable framerate but no actual performance metrics or the configuration of the game itself were stated during the event. We know that Intel's Xe graphics architecture will have several designs, including the flagship Ponte Vecchio exascale GPU which has also been referred to as the "Father of all GPUs" by Raja himself. 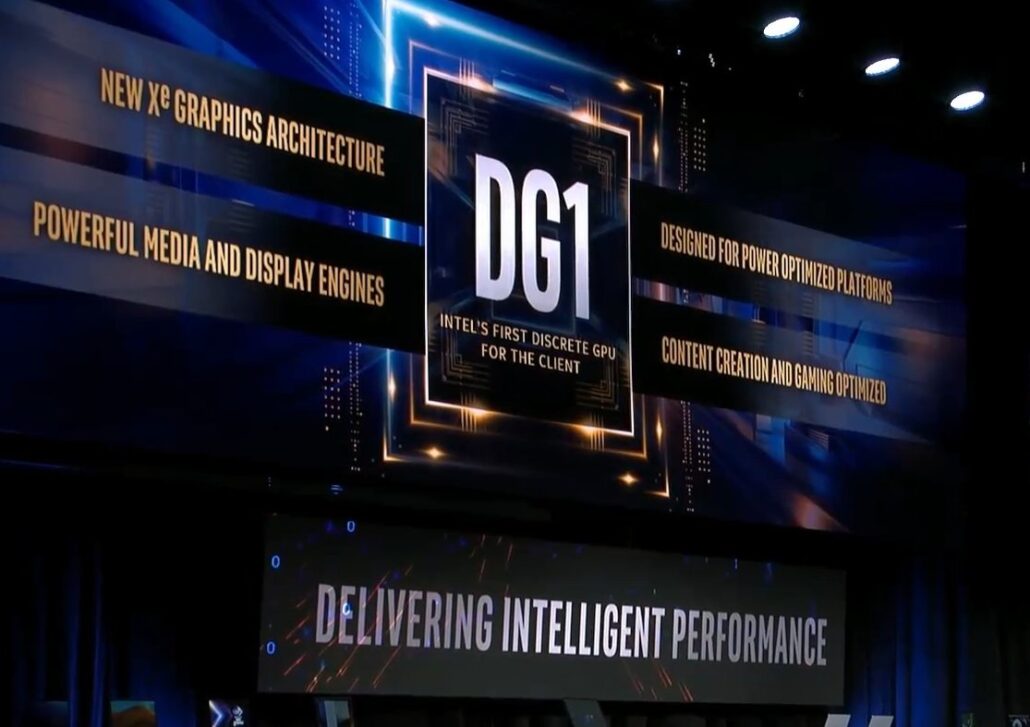 We can definitely expect more news on both Tiger Lake and Xe architecture based discrete graphics card in the coming months with Computex 2020 being the most likely venue where Intel would be unveiling full launch plans of their next-gen client product portfolio.