Analysis: Intel Agrees To Buy Mobileye, Is The Company Worth $15.3 Billion?

Intel has made the decision to diversify away from its core business to a very significant extent with the acquisition of Mobileye for $15.3 Billion. Mobileye currently accounts for 70 percent of the global market for driver-assistance and anti-collision systems. It employs 660 people and had adjusted net income of $173.3 million last year.On paper, the deal looks good, the market for autonomous vehicles is clearly a race Intel wants to get into and analysts have commented that this might be a fair price for something that is "key technology" to break into this sector. So the question then becomes, is Mobileye worth $15.3 Billion?

The deal and Intel (NASDAQ:INTC)'s past record

I'll tell you right off the bat that I am not going to be giving an alternative valuation for the acquisition, just pointing out some considerations regarding Mobileye that could point to an over-valuation driven by the heating arms race among autonomous-automobile companies. Let's start off with a little bit of context, Intel has a history of reacting incorrectly to new and emerging platforms. The most clear example of this is the fact that it refused to jump onto the smartphone ship until it was too late and in the process missed what could have been the biggest diversification opportunities of recent past. Another example would be spinning out its cyber security division, formerly known as McAfee, in a deal valuing it at $4.2 billion including debt, five years after having bought McAfee for $7.7 billion.

Keeping that in mind, we can see how it might set the stage for Intel(NASDAQ:INTC) overcompensating in a manner of speaking and jumping on-board whatever seemingly disruptive opportunity comes up next. Goldman Sachs projected the market for advanced driver assistance systems and autonomous vehicles would grow from about $3 billion in 2015 to $96 billion in 2025 and $290 billion in 2035. So in terms of the sector it has chosen to diversify into, there is very little argument; the autonomous market is definitely an opportunity for Intel and it will definitely be the big leagues of the future.  So the race itself that Intel has opted for is one it should very much try to get into. Mobileye however, may or may not be the right horse depending on a number of variables which we will get into this article.

Lets start with the basics, the first question that we can ask is what will be Mobileye's state post-acquisition and what exactly has Intel in store for the Israeli chip designer. Interestingly, according to Intel, it will be giving Mobileye an unusual amount of autonomy, integrating its own automated driving group with Mobileye's operations under Mobileye Chairman Amnon Shashua, who will lead the unit from Israel. The two companies already have an ongoing relationship in the form of their ongoing collaboration with German automaker BMW on a project to put a fleet of around 40 self-driving test vehicles on the road in the second half of this year

So considering the fact that Intel is paying a premium of 60 times Mobileye's earnings, about four times the premium that Qualcomm is paying to acquire the Netherlands' NXP, just what is the verdict on this deal. As is always the case however, the answer isn't in black on white, and depends primarily on how Intel utilizes the company. To give our readers some more context, Mobileye adopted the MIPS approach recently going to use Intel's technology for its fifth generation of Vision processors that are going to enter the market sometime in 2021.

Comparing Mobileye's offerings to that of competitors like Nvidia (NASDAQ:NVDA)

In terms of current offering, Mobileye plans to introduce the EyeQ4 chip by 2018 – a truly worthy upgrade (to the EyeQ3) with 14 computing cores, out of which 10 are accelerators. You will have your usual 4 cores as well as accelerators of three different kinds: PMA (Programmable Macro Array), VMP (Vector Microcode Processors) and MPCs (Multithreaded Processing Clusters). The actual count will be 4 Cores, 6 VMPs, 2 PMAs and 2 MPCs for the EyeQ4. This will result in approximately 1.26 Billion MAC/s or 2.5 Tflops. And here is the best part – all of this will be done while staying within a TDP Target of less than 5 Watts.

Unfortunately however, there is a problem with Mobileye's approach to tackling ADAS and the self-driving challenge. According to statements of their own key execs, the market started accelerating towards self driving much faster then they had anticipated. Their products utilize fixed function philosophy and while they have a high utilization rate and were much faster then GPUs previously, not only are they starting to fall behind in terms of the performance increase offered every year but aren't as flexible or powerful as Nvidia's approach - which is basically machine learning on the go.

Take the EyeQ4 processor for eg which will have (in roughly comparable terms) a performance rating of 1.5-2.5 TFLOPs where as Nvidia (NASDAQ:NVDA) is equipping Tesla cars with the Drive PX 2 set which can churn out 24 TFLOPs. I have seen some arguments which point out that the cuDNN equivalent utilization is roughly 0.3 for GPUs and even if we assume that Tesla has made no in-house optimizations, you are still looking at a bare bones performance of 8 TFLOPs. So Nvidia's worst case scenario is 3.2x faster than the best Mobileye chip (which hasn't even fully landed yet) right now.

Let's talk about the Intel-Mobileye chip now. The EyeQ5 will probably be designed in advanced 10nm or below FinFET technology node and will feature eight multi-threaded CPU cores coupled with eighteen cores of Mobileye's next-generation, innovative, and well-proven vision processors. Taken together, these enhancements will increase performance 8x times over the current 4th generation EyeQ4. The EyeQ5 will produce more than 12 Tera operations per second, while keeping power consumption below 5W, to maintain passive cooling at extraordinary performance. Engineering samples of EyeQ5 are expected to be available by first half of 2018 and are supposed to be delivered to market by 2020.

Let's compare this to an upcoming product Nvidia has already announced: Xavier is a complete system-on-chip (SoC), integrating a new GPU architecture called Volta, a custom 8 core CPU architecture, and a new computer vision accelerator. The processor will deliver 20 TOPS (trillion operations per second) of performance, while consuming only 20 watts of power. As the brain of a self-driving car, Xavier is designed to be compliant with critical automotive standards, such as the ISO 26262 functional safety specification. Xavier samples will be available the fourth quarter of 2017 to automakers, tier 1 suppliers, startups and research institutions who are developing self-driving cars with availability in 2018.

So where does that leave Intel?

Nvidia is first and foremost a GPU designer and when the name of the game is DNN, it will be able to provide both the back-end for training as well as the onboard system for fully autonomous driving systems. Mobileye and Intel however can only provide one (the onboard system) since CPUs have never been good at deep learning applications. The lack of GPGPU IP is another weakness in the Intel-Mobileye fit that could potentially hurt its chances of fully utilizing the acquisition. 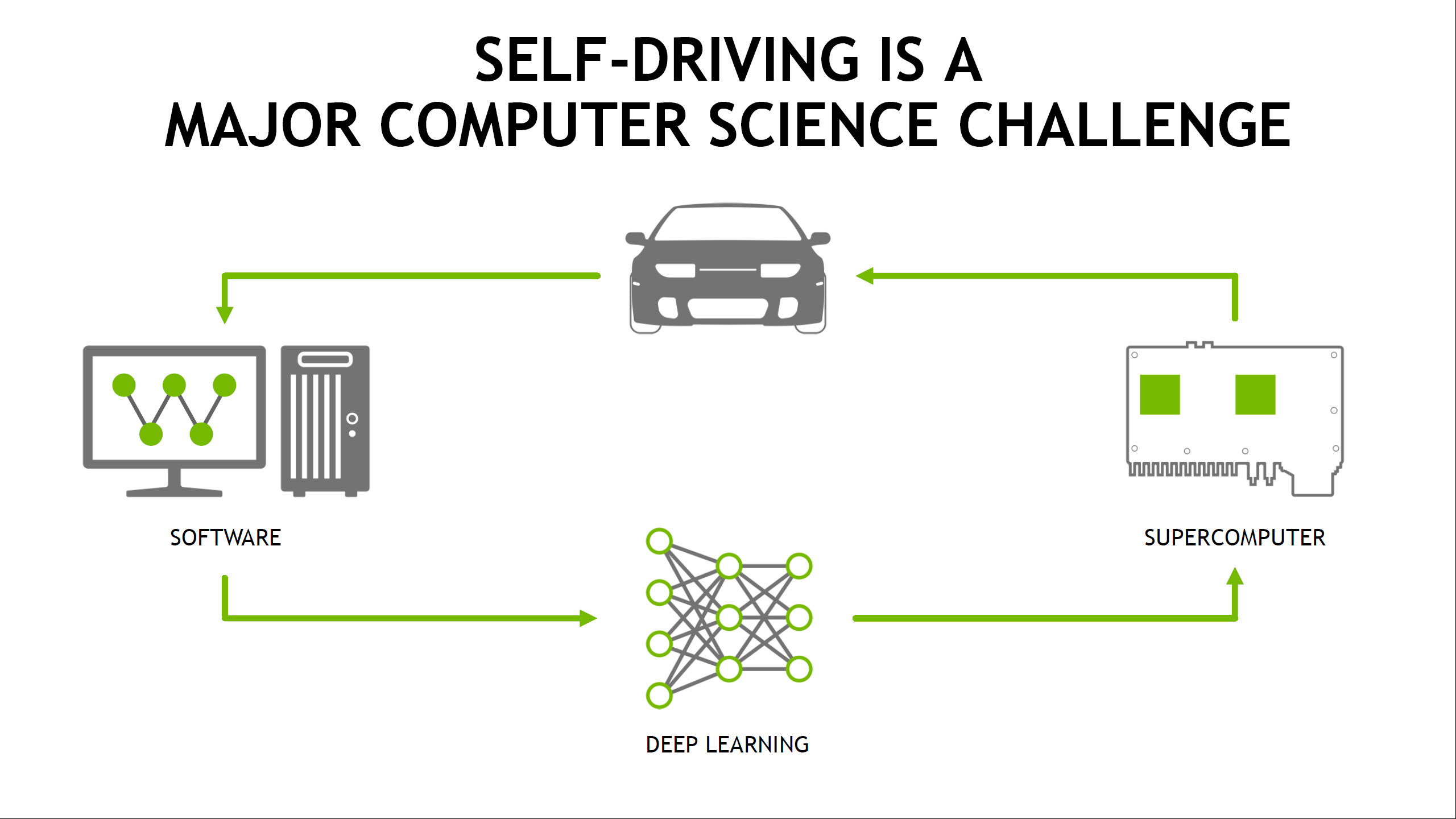 Nvidia Corporation can provide both the back-end and the front-end (in a manner of speaking) for autonomous driving systems.

That said, this is something Intel can tackle in numerous ways. The first way to do it would be to to utilize its in-house talent that it poached from Nvidia (An example being Sanjay Gongalore from NVIDIA. At NVIDIA, Gongalore served as director of GPU ASIC Engineering). Secondly (and admittedly less probably), it can utilize the Radeon IP it already has to provide backend functionality to compliment the Mobileye initiative.

In any case, one thing is very clear: Mobileye in its current state and function does not appear to be wholly capable of matching Nvidia in either capability or performance and will quickly be far outstripped by the fast paced chip-maker if it does not change its current fixed function philosophy. That said, Mobileye would have been a very good buy just for the IP it offers at a significantly lower premium. At the current pricing, it is priced more like the on-paper specs of the company (70% market share) without accounting for the severe risks it faces going forwards from new but powerful entrants like Nvidia Corporation. To justify its purchase, Intel must seek to broaden the vision of Mobileye and offer a truly integrative approach that matches the one provided by Nvidia.