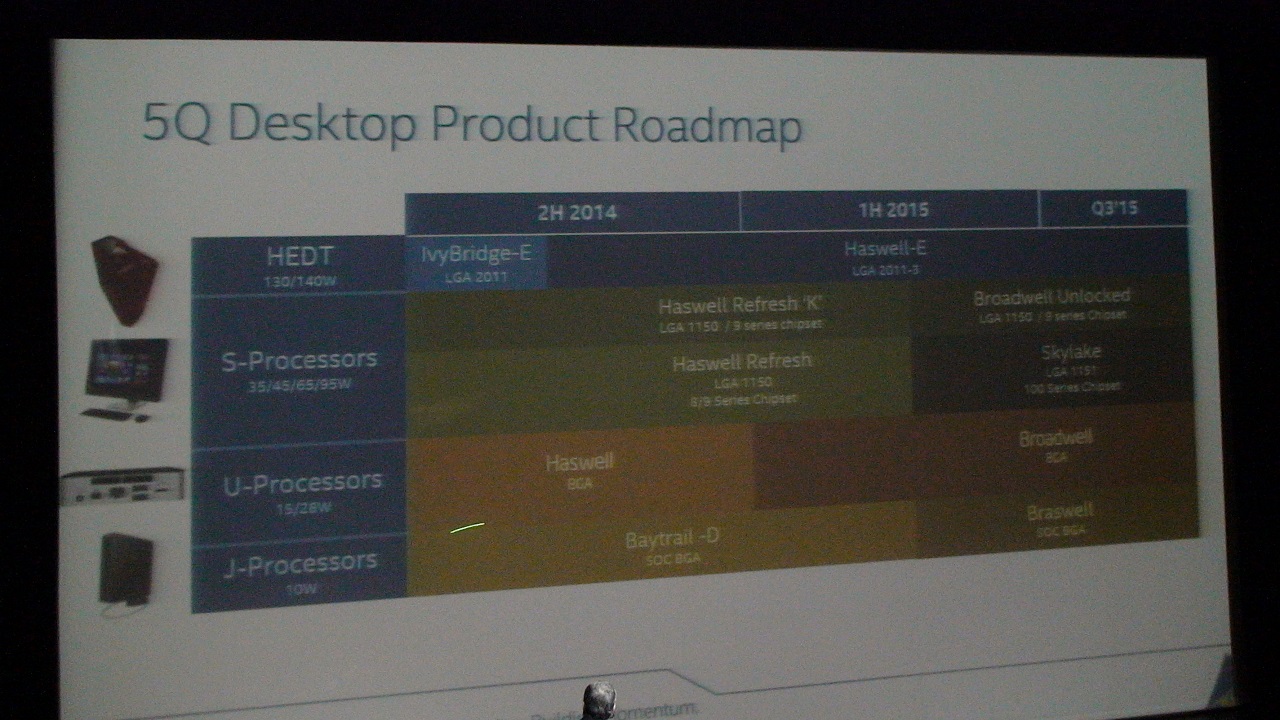 .
The slide shows both Broadwell and Skylake arriving on the desktop at the same time. Just like we said last month. Big blue will be releasing unlocked Broadwell CPUs alongside Skylake chips in Q2 of 2015.

The new Broadwell CPUs will be a drop-in replacement in current LGA 1150 9 series motherboards. While the performance uplift will not be all that exciting on the CPU front. the GPU performance should show some very healthy gains. As well as improved efficiency through reduced power consumption.

Manufactured on a brand new 14nm node we're very interested to see how well Broadwell overclocks. The 14nm node could prove to be troublesome for high TDP desktop chips as nodes have increasingly been optimized to give the best gains at lower power envelopes. Pushing 4.5Ghz+ on a desktop i7 might prove to be more of a challenge this time around.

The roadmap also indicates that Haswell-E will stretch well into 2015. Which was certainly expected. The LGA 2011 platform has always enjoyed a longer life-span than its younger mainstream sibling. The roadmap also shows Braswell the successor to Bay-Trail showing up in Q2 2015. Braswell will target the sub 10W arena of ultra small and compact enclosures.

We can't help but notice that unlocked Skylake i.e. Skylake-K is completely missing from Intel's roadmap. Unlocking the multiplier on a chip doesn't pose any technical challenge what so ever. Which tells us that the lack of an unclocked Skylake part could be due to a more novel marketing reason. Intel might want to get rid of the leaky Broadwell chips first before it introduces the more desirable unlocked Skylake CPUs. What's certain is that it won't show up anytime before Q4 as is evident by the roadmap.