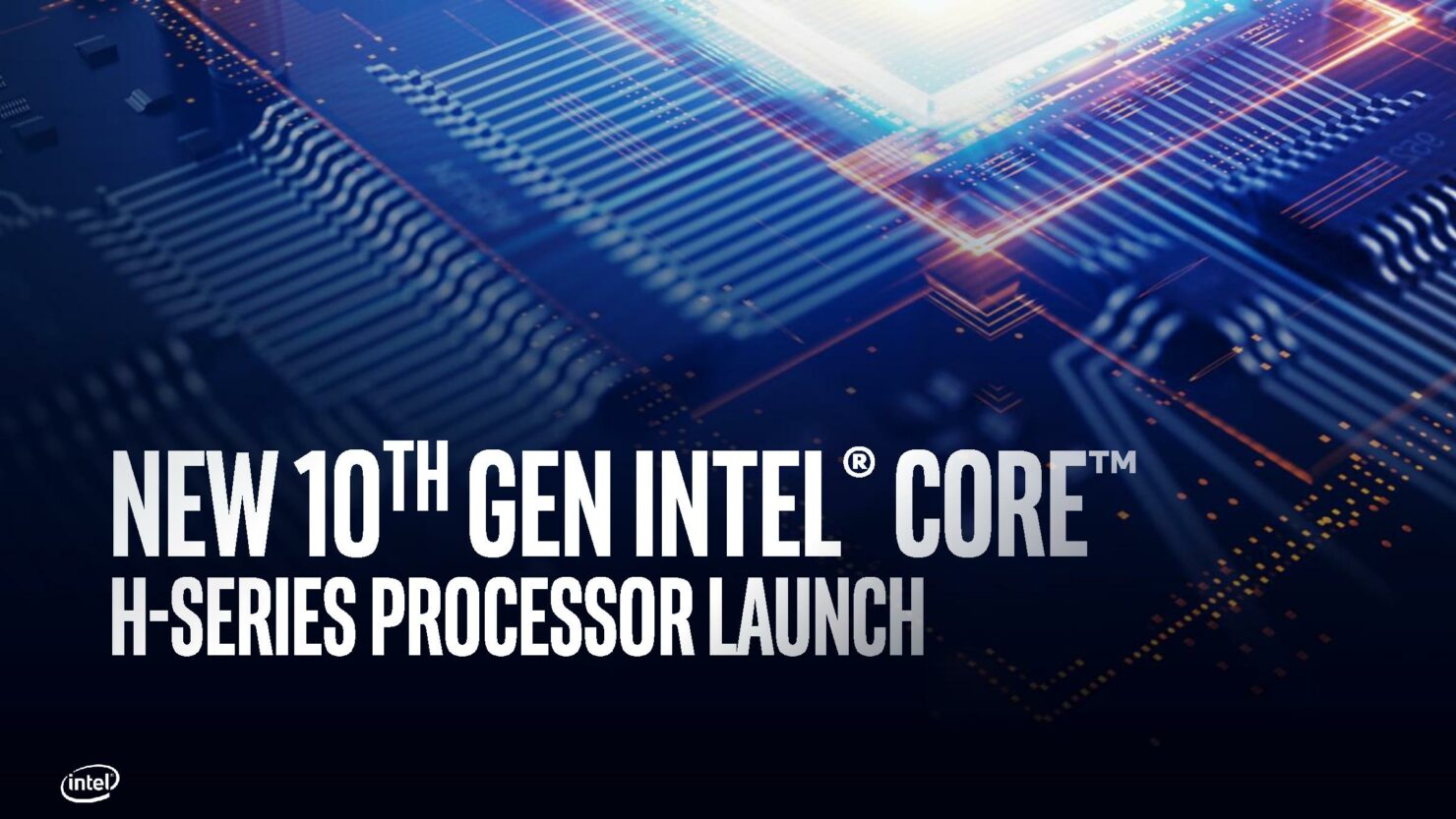 Intel has officially launched its 10th generation mobility processor family codenamed 'Comet Lake H' and has achieved the milestone of being the first mobility processor that can hit the 5 GHz mark. With competition from AMD Renoir which has the advantage in IPC, Intel has turned to utilize its highly mature 14nm process (++++?) to deliver unprecedented frequency gains that would normally just not be possible. The company also explained its decision to focus on high clocks in a slide during the official launch. 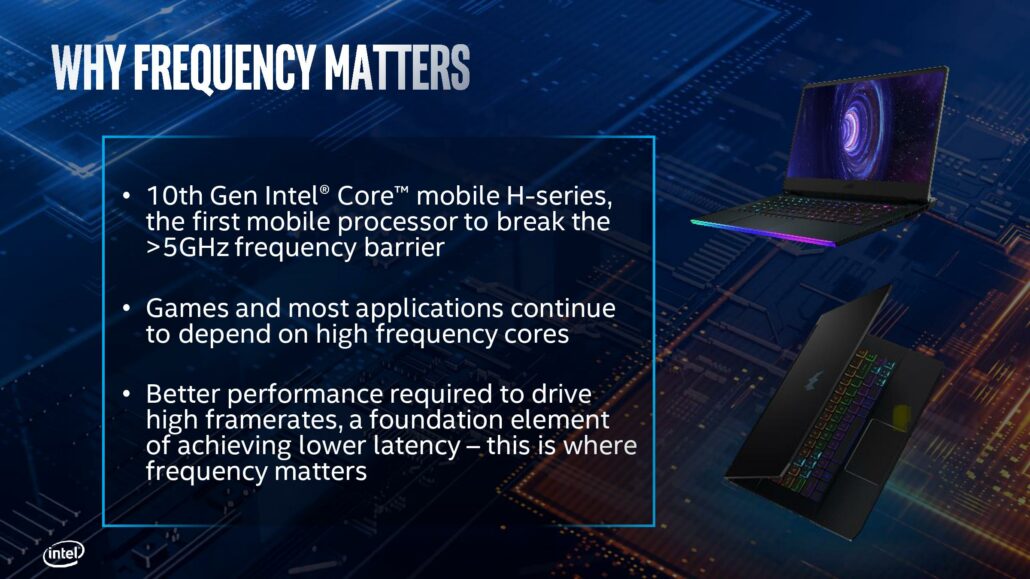 The (primary) reason for the focus on high clocks can also be attributed to the fact that 10nm is behind schedule and not yet ready for high-performance chips. In fact, the company has hinted that 10nm is not going to be their best process and will likely accelerate adoption to 7nm to catch up as far as process technology goes. That said, the Intel Comet Lake H is an excellent CPU family in terms of gaming performance and depending on the price can defend its market share. 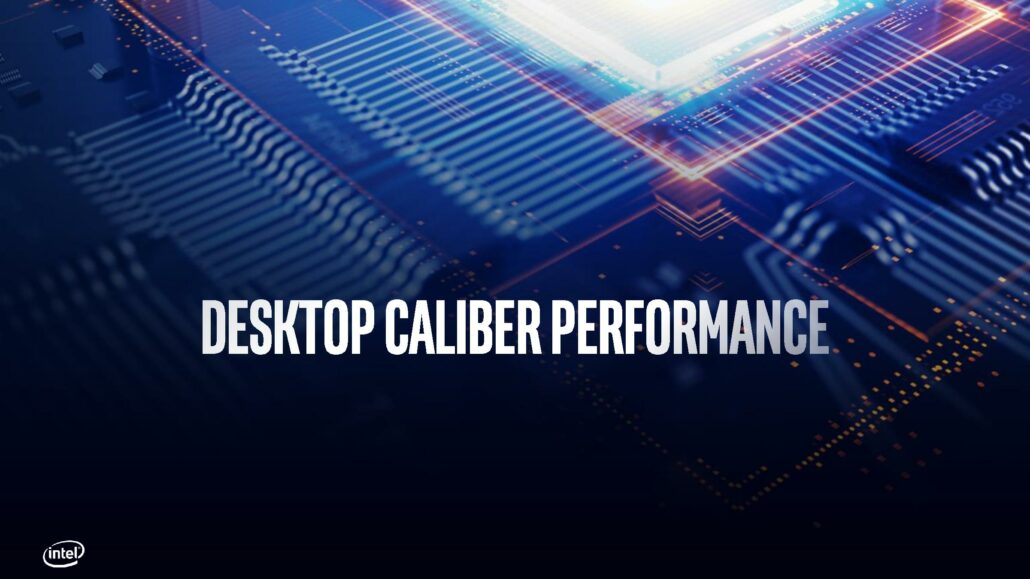 The "H" series is the one that goes into powerful laptops (as opposed to the "U" series, which goes in ultrabooks and low-powered variants). The TDP for all of these chips is 45W and considering the clock rates extend as high as 45W, these can be thought of as SKUs that are in between traditional mobility and desktop parts - sort of like what NVIDIA does with their 'desktop' mobility GPUs. 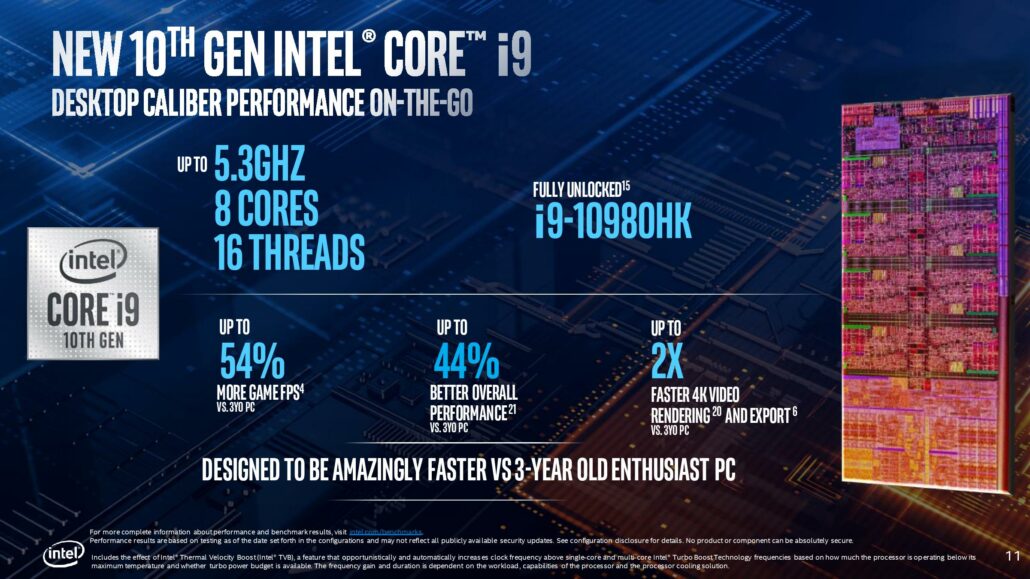 An 8 core that can boost up to 5.3 GHz on a mobility platform would be an extremely powerful setup. This is something that we expected considering AMD has gained the edge in IPC and Intel needs to up the clock speeds (something it can do because of its ridiculously mature 14nm process) to remain competitive. 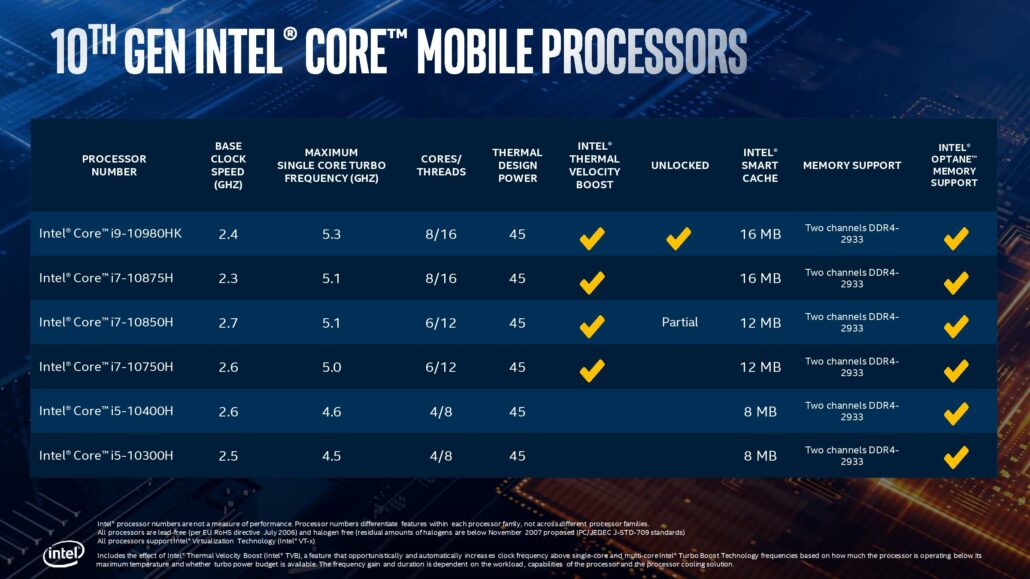 The lineup is extremely impressive and if priced appropriately could certainly turn on the heat for AMD's parts. Intel has already shown that they are ready to eschew their old pricing strategy with server parts and it's time to pass on the same price cuts to mainstream parts (or lose market share to AMD). 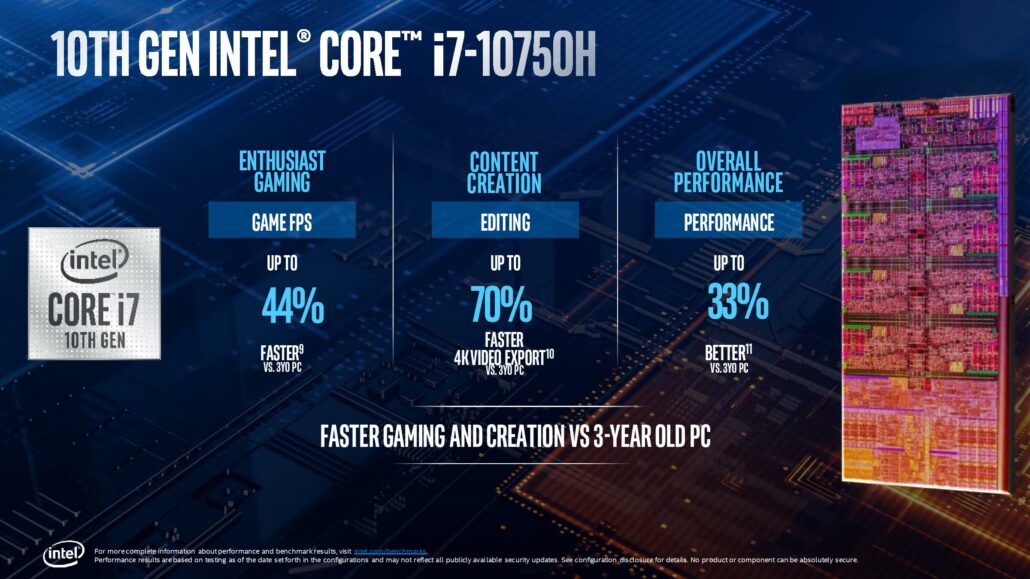 Intel's Core i9-109800HK is the flagship part here, which will have a base clock of 2.4GHz and a boost that is more than 2x the base clock all the way up to 5.3GHz. This is possible through the introduction of Turbo Boost Max 3.0 to Intel's mobility platform with this iteration of SKUs. The Core i9 part is an 8 core and will be fully unlocked (bringing the overclocking capability to the mainstream mobility segment). All other parts will have a locked multiplier (except for the Core i7-10850H which is partially unlocked). Memory Support has been extended to DDR4 2933 MHz (without overclocking the IMC) and Optane Memory support has also been added. 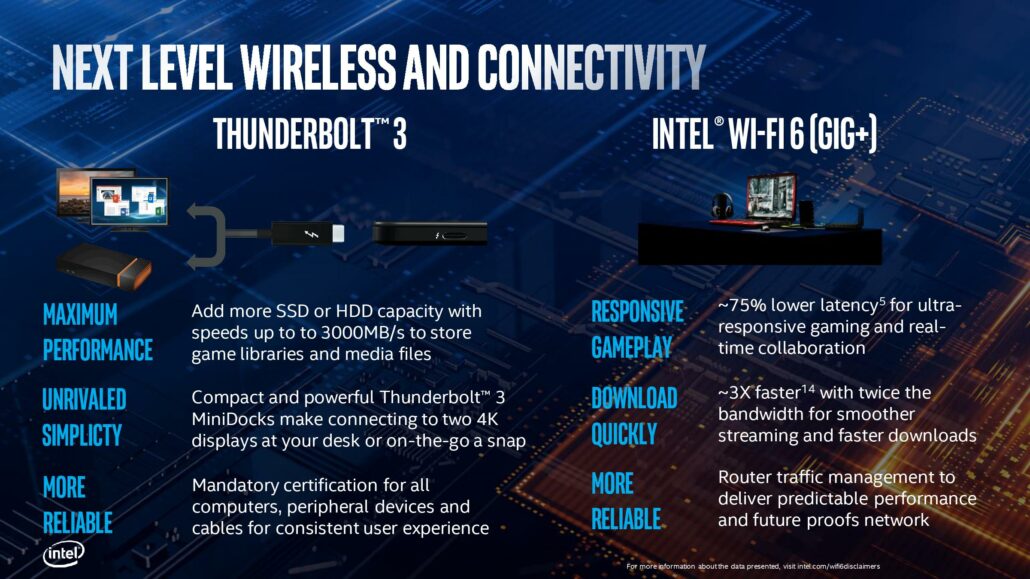 WiFi 6 and Thunderbolt 3 will also be featured in this iteration of mobility processors. As we exclusively told you, Intel's 10th generation mobility processors will be launching side by side with NVIDIA's SUPER refresh that will lower the cost of gaming significantly (with the refresh GPUs, you can get higher gaming performance while staying within the same price bracket). 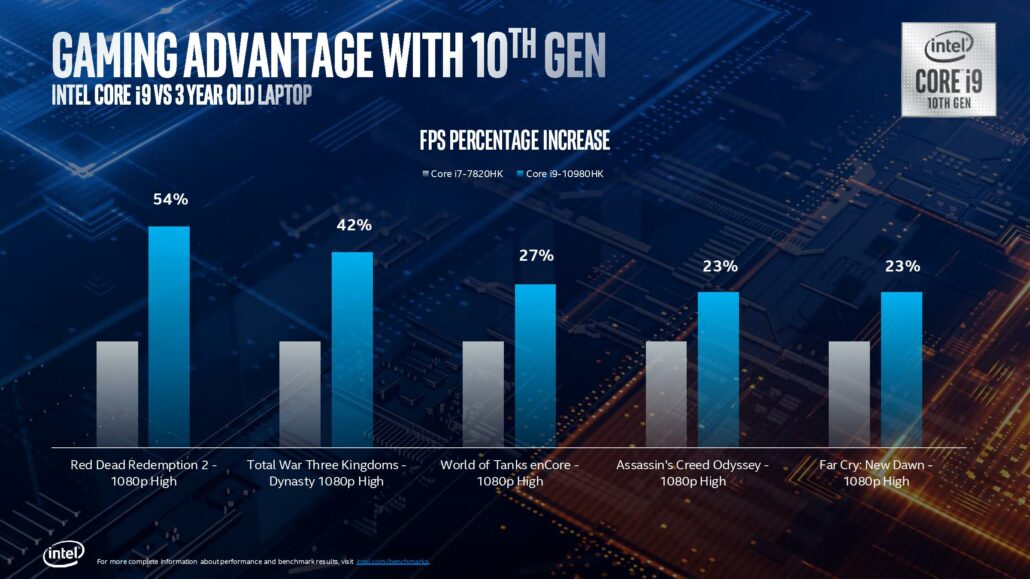 The company also shared some gaming benchmarks to showcase the difference between a 3-year-old Intel mobility processor and 10th generation Comet Lake ones. The difference is quite stark as you might expect from a difference in core counts and Intel CML-H is up to 50% faster than 7th generation flagships. The company also showcased some heavy-weight design wins from Razer, HP, ASUS, Lenovo, MSI etc. The rest of the slide deck can be found below: 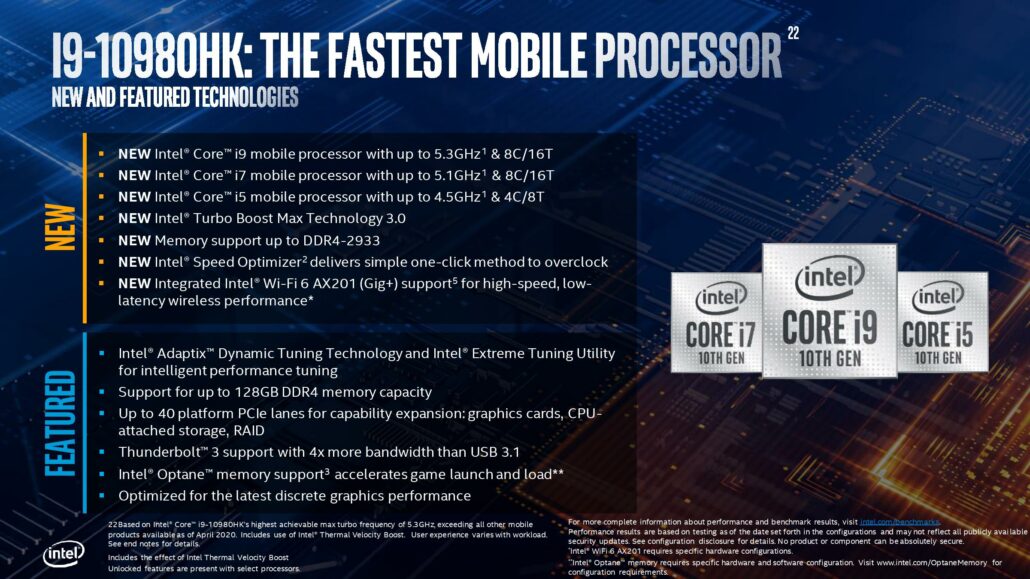 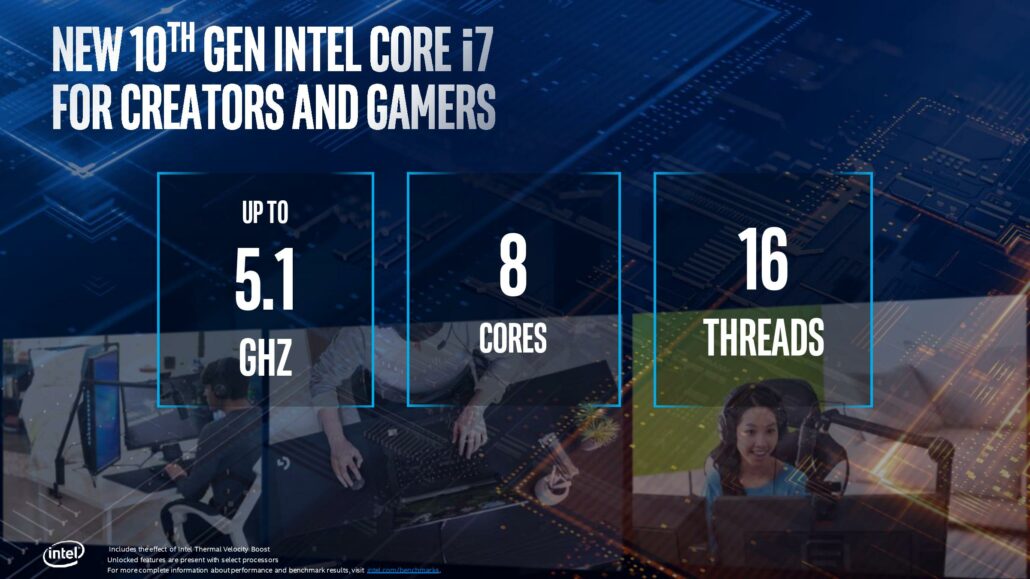 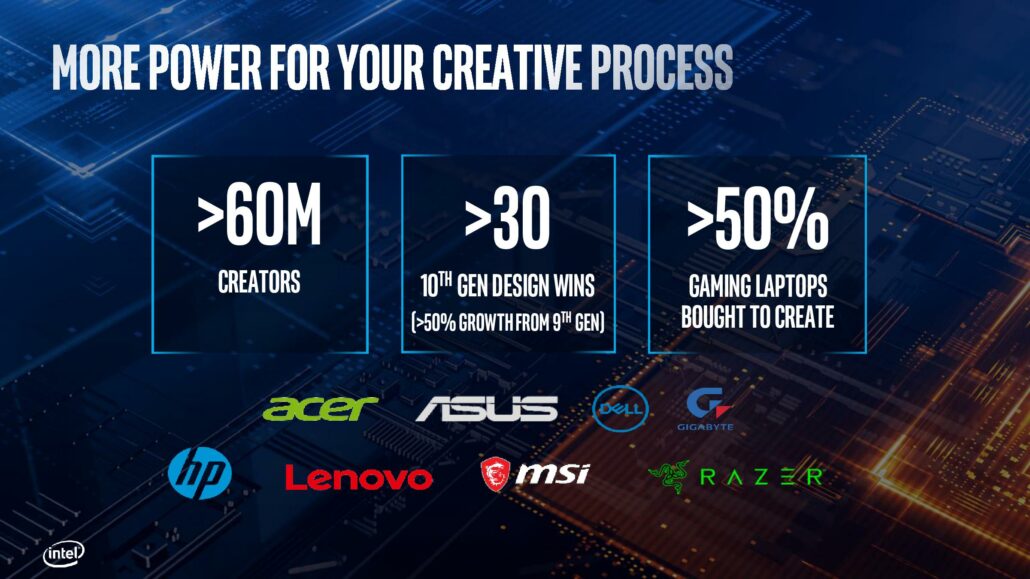 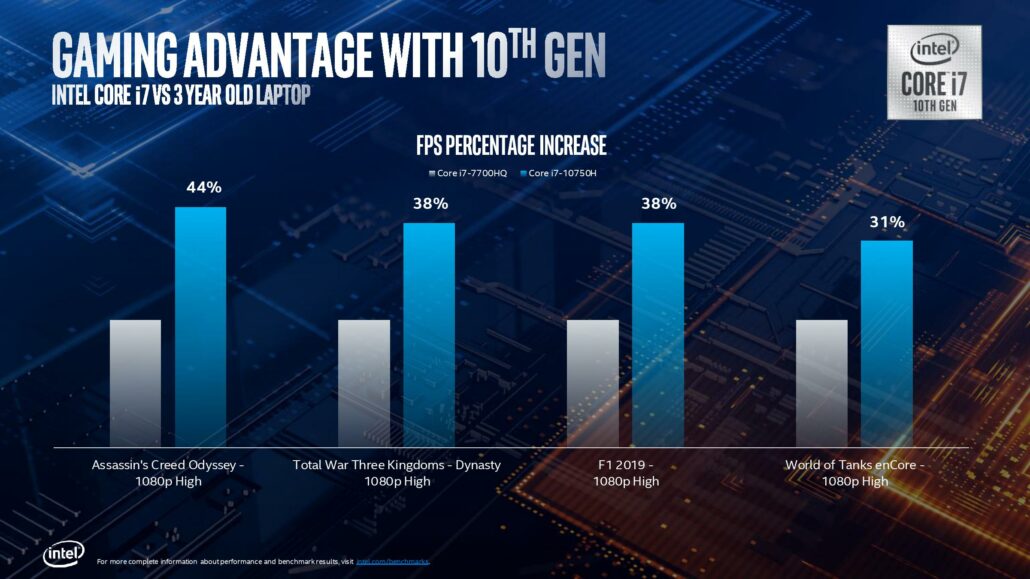 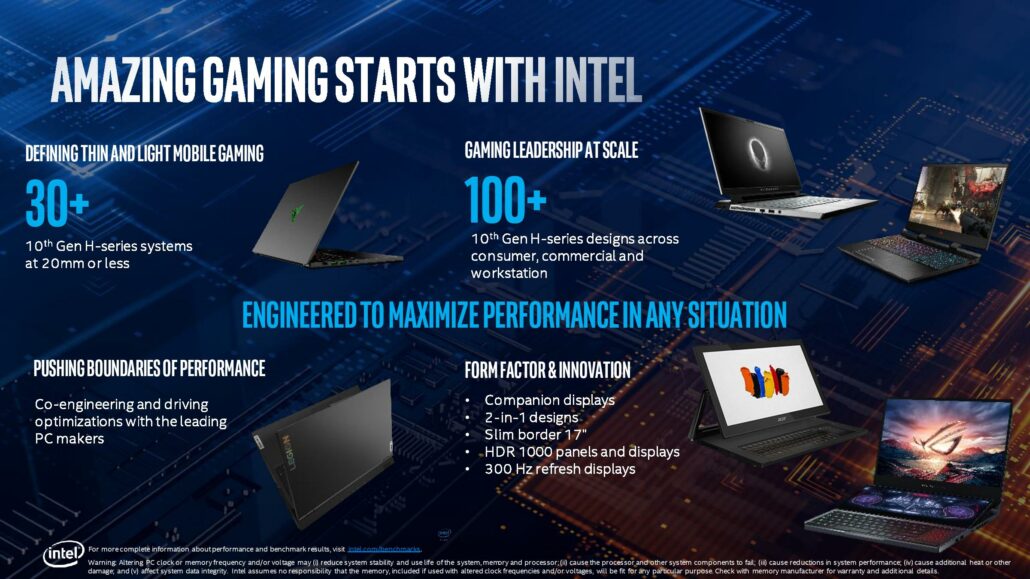 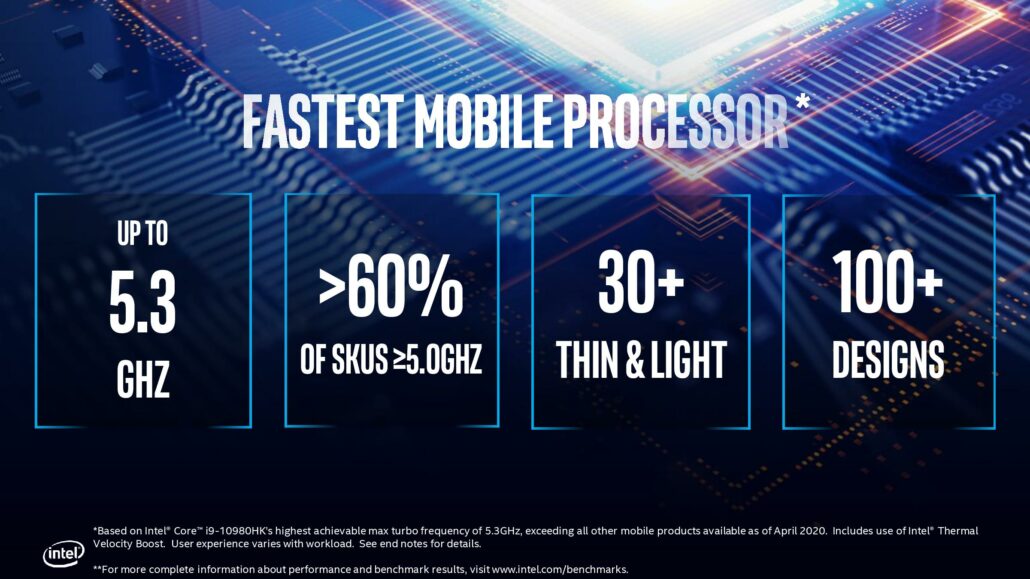