Intel has just recently announced its long speculated new 'Core' processor that combines a high performance CPU with a discrete GPU from AMD for an incredible graphics and compute performance package. Coupled with HBM memory, the main advantage of this approach are incredible power savings as well as increased performance over the traditional integrated GPUs (which used technology licensed from NVIDIA.) We will cover the official press release first, then move on to the benchmarks and leaks.

The new product, which will be part of our 8th Gen Intel Core family, brings together our high-performing Intel Core H-series processor, second generation High Bandwidth Memory (HBM2) and a custom-to-Intel third-party discrete graphics chip from AMD’s Radeon Technologies Group* – all in a single processor package.

“Our collaboration with Intel expands the installed base for AMD Radeon GPUs and brings to market a differentiated solution for high-performance graphics,” said Scott Herkelman, vice president and general manager, AMD Radeon Technologies Group. “Together, we are offering gamers and content creators the opportunity to have a thinner-and-lighter PC capable of delivering discrete performance-tier graphics experiences in AAA games and content creation applications. This new semi-custom GPU puts the performance and capabilities of Radeon graphics into the hands of an expanded set of enthusiasts who want the best visual experience possible.”

You can read the complete press release from Intel over here.

The complete press release from AMD can be found over here.

Intel recently confirmed at their Technology and Manufacturing Day that they’ll be moving towards a more robust and heterogeneous architecture. The new architectural layout will allow Intel to mix and match various CPU components and dies based on different process nodes and interlinking them on a single chip.

This would allow Intel to do away with the cost and efficiency of a single monolithic design and utilize smarter and more efficient designs for their future processors. The new processors will utilize an embedded, multi-die interconnect bridge allowing for high density and high bandwidth, die-to-die interconnects.

While Intel has chosen to remain tight lipped about details surrounding their upcoming lineup, the rumor mill has already had a boatload of leaks on the series. Dubbed the Kaby Lake G series lineup, it will have a dedicated Radeon GPU.

According to the leaked specifications, here is what we know about the chip so far: 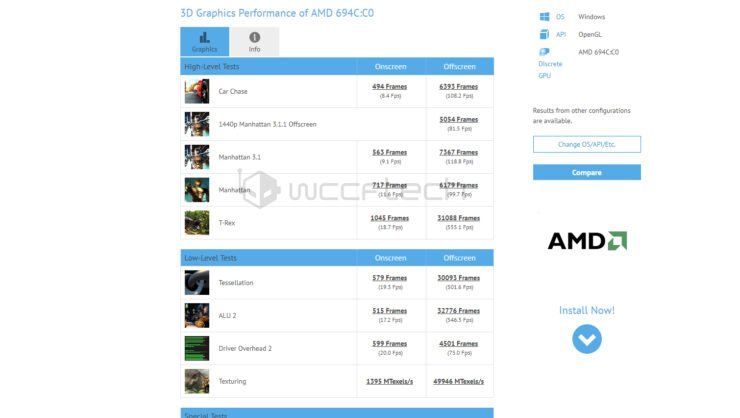 The first benchmark we have comes straight from GFXBench. As we have mentioned in the past this isn't really a good benchmark since it tends to be heavily influenced by driver condition and therefore is not really indicative of the final performance one can expect from these devices. Still it forms a valuable data point for future reference. The 694C:C0 device (aka Kaby Lake G with Integrated Radeon Graphics) scores around 6393 in the Car Chase scene, 7367 in Manhattan 3.1 and 31088 in the T-Rex scenario. 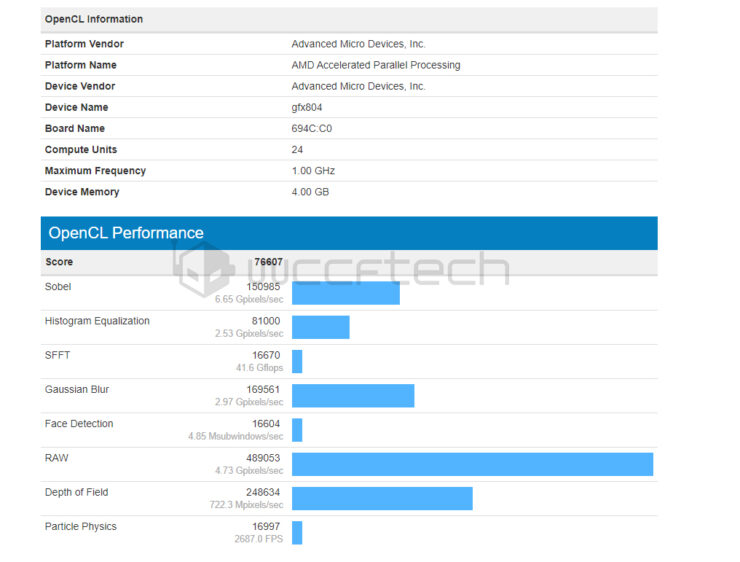 The second benchmark is from the famous Geekbench. This entry also helped us nail down the clock speed as well as some other oddities of the lineup and results in an OpenCL score of 76607.

Finally we have a real gaming benchmark which comes from TUM APISAK and showcases the performance of the chip with a real game. The core clock of the processor is also revealed as well as its performance. The High 1080p preset was used to run the benchmark and shows close to expected performance for the specifications revealed.

Finally we have the 3DMark performance benchmark which should be a fairly decent metric to compare the power of the chip with other integrated solutions. As far as I know this remains the most powerful on-chip graphics solution that the world has ever seen. Cliche statements aside this is honestly one of the more interesting developments of this year and I cannot wait to see it in action. Keep in mind however that AMD's offerings currently ship with Vega graphics and it remains to be seen how these compare to them. In any case, it looks like NVIDIA is the only loser in this equation.