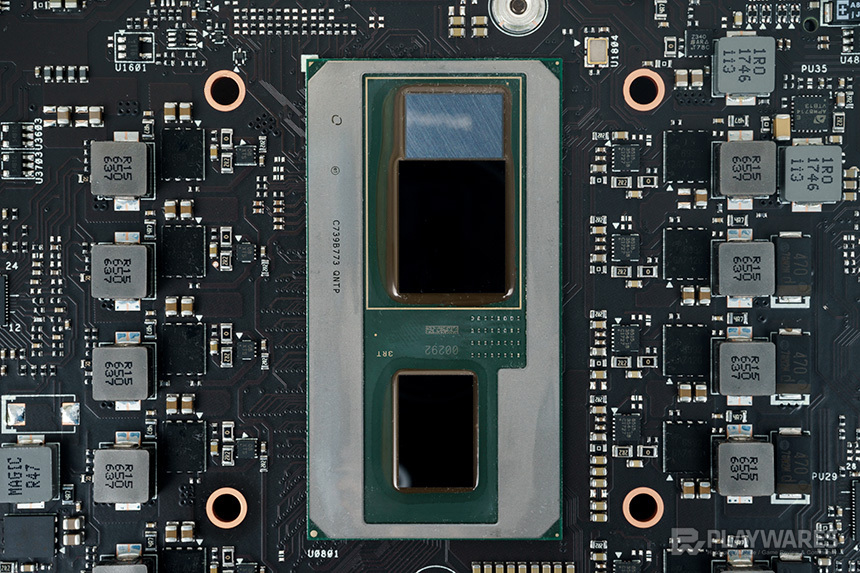 Intel's Hades Canyon NUC which features their latest 8th Generation core processors with RX Vega graphics has been reviewed by Playwares. The Hades Canyon NUC rocks the fastest Core i7-8809G processor and comes in a 1.2L SFF design, priced at around $999 US.

The Hades Canyon NUC with Core i7-8809G is the fastest design that Intel will have to offer. Specs of this extremely fast package include the Core i7-8809G CPU itself with 4 cores, 8 threads and clock speeds of 3.1 GHz base and 4.2 GHz boost. There’s also 8 MB of L3 cache and an on-die Intel 630 graphics chip clocked at 1100 MHz. In addition to that, the chip features the AMD Radeon RX Vega M GH graphics with 4 GB of HBM2 running at 1.6 Gbps, all in a 100W package. Do note that this is the only variant in the lineup which can be overclocked on all dies including CPU, GPU and HBM2.

The AMD Radeon RX Vega M GH graphics chip will be featured on the fastest 8th Generation Core i7 processors. These feature 24 CUs which equals to 1536 stream processors, 96 texture units and 64 ROPs. The Vega 24 die is clocked at a base frequency of 1063 MHz and boost frequency of 1190 MHz. These chips deliver a rated single precision output of 3.7 TFLOPs which is just about the same theoretical FP32 output of the GeForce GTX 1060 which does 4.0 TFLOPs on the base version. 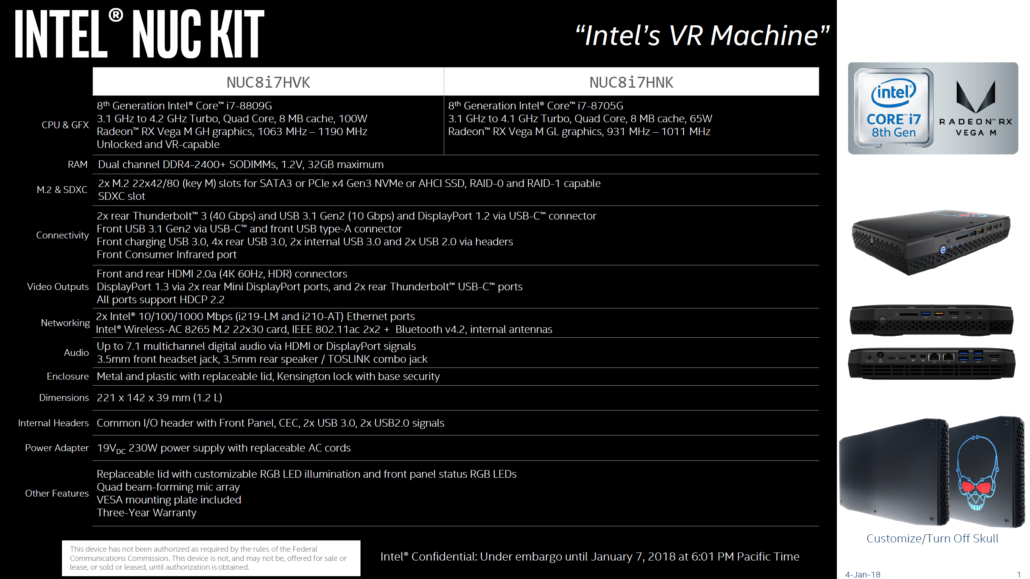 The Radeon RX Vega 24 GPU is accompanied by 4 GB of HBM2 memory and this operates at 1.6 Gbps along side a 1024-bit bus interface, pumping out 204.8 GB/s of bandwidth. For a single HBM package, this is lots of available bandwidth dedicated for the GPU alone.

The Intel Hades Canyon NUC comes as a barebone kit. Out of the box, you get a AC adapter rated at 230W (19.5V / 11.8A), the NUC itself and some manuals for installation guidance. When it comes to I/O, thee Intel NUC is feature loaded on the outside with an dual Thunderbolt ports, dual Display ports (Mini DP), dual Ethernet LAN ports, four USB 3.0 ports, an HDMI port, a power in and a SPDIF audio optical jack on the rear side. A large exhaust vent is also seen right below the I/O ports which ventilates hot air out of the large aluminum fin stack which cools the system inside. On the front of the NUC, we have another HDMI port, a USB 3.1 Type-C port, two USB 3.1 ports, a SD card reader, a headphone jack and a power button. This is a VR targeted NUC hence the additional HDMI ports will come in handy.

This NUC will be available in a 1.2 liters form factor, with an integrated 230W power supply, a 100W Intel 8th Gen core processor with Radeon RX Vega M and HBM2 while being ultra silent and super portable. The system will come with a fully unlocked CPU, GPU and even HBM2 which can be over clocked with utilities such as Intel XTU and Radeon Wattman.

When it comes to software features for the platform, Intel is promising day zero drivers for a range of modern and older titles with support of Radeon Adrenaline Edition which provides useful tech features such as Radeon Chill, Radeon ReLive and Radeon FreeSync.

Since this is a barebones kit, there's everything inside the system except the memory and storage. A better look at the cooling system reveals a large copper heatsink which is attached with two blower style fans. The copper base seems to be a vapor chamber design that sits vertically on an aluminum fin stack.

The front side of the PCB comes with the soldered I/O paths, SODIMM slots, a mSATA slot for WiFI and wireless chip which is already shipped with the NUC and two M.2 slots (full + half length). This can allow for good amount of storage and memory options. On the rear side of the PCB, attached to the main copper block is the Core i7-8809G chip itself and the PCH. The PCB comes with a five phase power delivery system while the HM175 PCH can be spotted on the right side.

Now we come to the benchmarks, Playwares performed multitude of tests at both stock and OC frequencies. The CPU was overclocked to 4.3 GHz using Auto voltage mode while the GPU clocked at 1300 MHz (HBM2 @ 950 MHz). Following are the benchmarks.

During these conditions, the CPU operates at a warm 75C while peaking over 90C which can introduce thermal throttling given the small design and limited cooling capacity of this platform. The GPU operates at 53C while peaking out at 57C which is very normal and surprising for an overclocked Vega GPU.

Overall, the tests proof that the Hades Canyon NUC with Kaby Lake-G is a very decent solution for a mini form factor PC. The combination of an Intel 8th gen CPU and RX Vega graphics make it the fastest single chip package currently on the market.