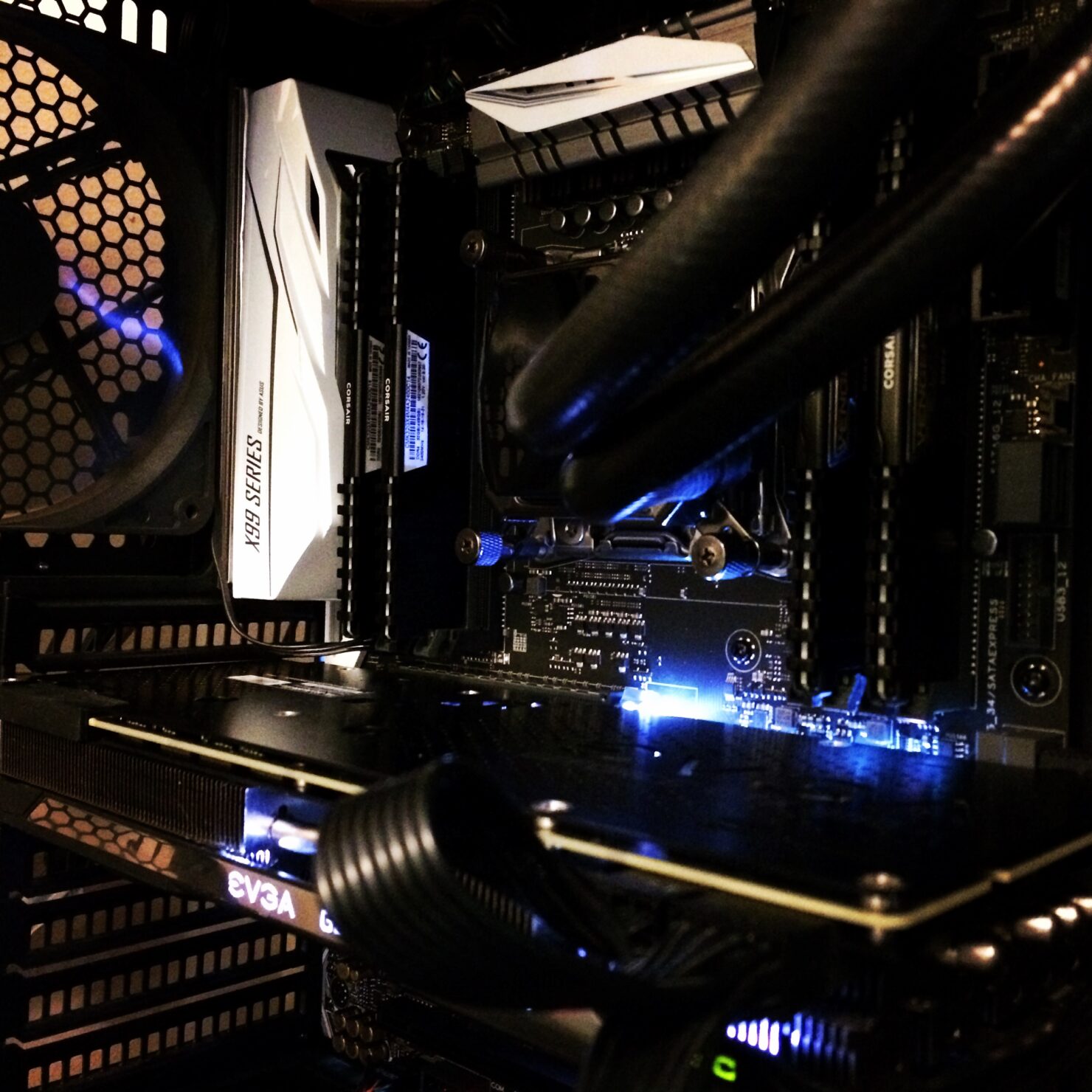 Intel recently released their Broadwell-E family of HEDT processors for the X99 platform and just so happened to be doing so right as we were in the process of upgrading our Workstation/Test Bench from our older Z87 and i7 4770k.  So we took this opportunity to see how the new i7 6800k overclocks and what performance gains there are from doing so.

We went for the i7 6800k mainly because we were buying this setup as non of the upgrade was being provided by any vendor and, at this time, are only doing single GPU testing so there really isn’t any benefit for us to have been too concerned about PCI-e lanes.  As far as the rest of the setup we ordered an ASUS X99A-II motherboard along with a 32GB (4x8GB) Kit of CORSAIR Vengeance LPX DDR 2400MHz.

We wanted to find the baseline so we set the XMP of the memory and ran through all of the tests, then we went for a mild overclock and settled on 4.2GHz at 1.22v as it was relatively easy to hit and didn’t give us much trouble. Going past 4.2GHz is when things started getting a bit funky for us, requiring more voltage than we wanted to put through it and generating a massive amount of heat that was quickly overwhelming the Silverstone TD02-lite 240mm AIO that we were using for these tests.  But, we eventually settled on a 4.4GHz overclock at 1.4v.

We ran through a battery of CPU specific benchmarks in order to see the baseline performance of the i7 6800k and then again at both of the overclock values that we settled on.   All of the benchmarks we use are readily available for free from their respective websites.  I understand that this may come off as us being cheap, but the reality of it is that it’s so that you can use these numbers to compare your personal system to and see whether or not it would be a worth investment for you to make.

This benchmark came from HWBot and is an excellent way to stress the CPUs x265 encoding and for this we only ran the 1080p benchmark with priority set to high. 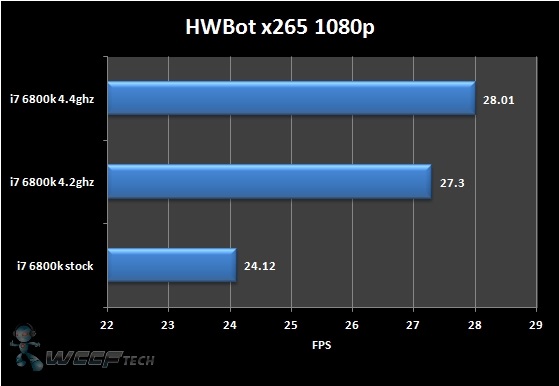 Cinebench is a rendering benchmark from the folks over at Maxon that is used to stress and test performance of either a single core or entire CPUs available threads by rendering out a 3D scene. 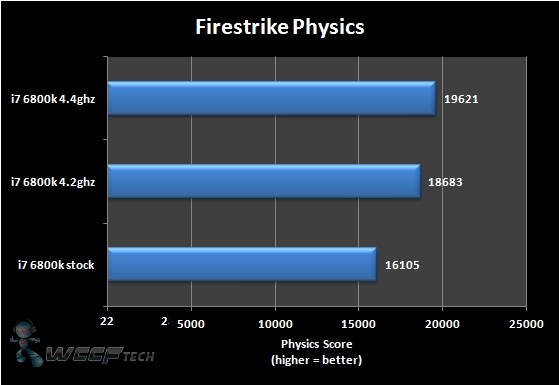 Geekbench 3 is a great tool for measuring a CPUs integer core performance.  We ran the 32-bit version of this benchmark and recorded the Single and Multi Core performance of the i7 6800k

Intel’s XTU or Extreme Tuning Utility has a built in benchmark that stresses various parts of the CPU and aggregate a total score. 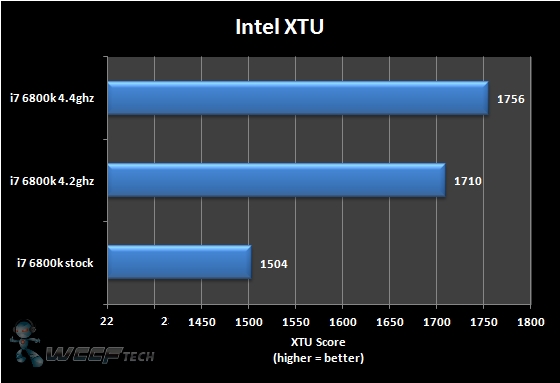 Overclocking does not go without its disadvantages, and typically those are felt most in terms of thermal output and power draw.  We took our thermal readings from the highest core temperature and power draw reading while running the Intel XTU benchmark as it represented a worst case for both of these. 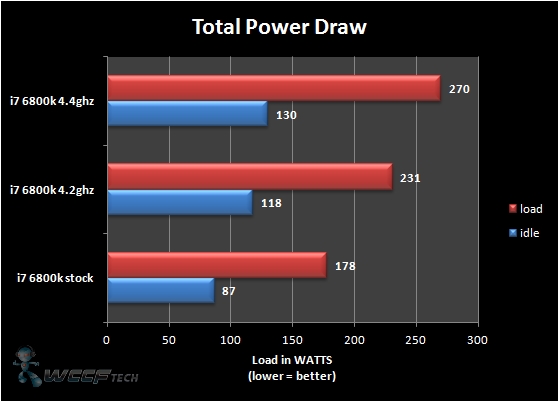 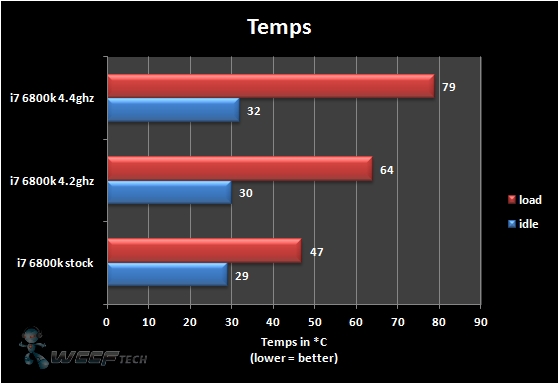 In the end I would be wrong if I didn’t mention how disappointed I was with the overclocks we were able to reach with this setup.  It’s not a high end overclocking board, but it’s not a bargain basement stripped down board either.  Perhaps we simply lost the silicon lottery with this 6800k, but a search through HWBot and OCN show a similar story among other owners as well.  So I can say that going from a stock setting to an overclock of 4.2GHz nets some measureable and noticeable gains without being too hard to manage on terms of thermals and power draw, going that extra 200MHz to 4.4GHz yields very small gains but much higher thermals and power draw.  I don’t see much benefit going past 4.2GHz even if the board and chip could handle it.  Perhaps with BIOS revisions to the motherboard maybe we could manage better overclocks, but for now I’m pretty happy with the performance we’re getting at 4.2GHz.  We hope our experiment and look into the Intel Core i7 6800k brought you a little insight into this CPU, and if you have a new Broadwell-E let us know in the comments how yours is doing.