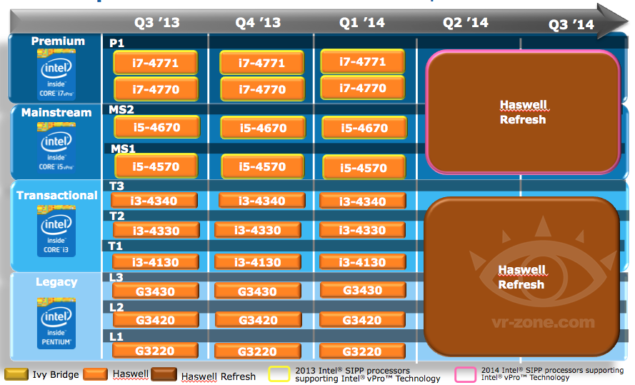 In total, Intel is planning to launch seven new Haswell refresh processor variants which include the Core i7-4790, Core i7-4690, Core i5-4590, Core i5-4460, two low TDP variants with the 'T' suffix and a single low-voltage CPU with the 'S' suffix. The new Haswell refresh processors from Intel would be compatible with the LGA 1150 socket and both 8-Series and 9-Series chipsets. Intel's 9-Series chipset will be able to support Intel's Broadwell processor generation which would be the first chip to be based on the 14nm architecture for consumers.

The prices would remain the same as current processors since these chips would basically be replacing the current models at their respective MSRPs. As for the unlocked K-series chips, Intel is expected to launch K-Series Haswell Refresh chip in Q3 2014 prior to the launch of their Broadwell K-Series chips and their flagship Haswell-E HEDT platform by the end of 2014.