As you can note from the picture, the chip is soldered "BGA" to a motherboard right next to the Lynx point 8-Series PCH. The Intel Haswell chip has quite some room dedicated to the onboard eDRAM package which is indeed lager than the Ivy Bridge "BGA" chip we saw back on the NUC system from Intel. The L4 cache memory codenamed 'Crystalwell' would significantly boost the iGPU performance on Haswell equipped Notebooks by delivering increased bandwidth to the iGPU.

The GT3e GPU which is codenamed 'HD 5200' would not be limited to High performance notebooks only. The HD 5200 GT3e chips are also expected to arrive in the desktop Haswell R-Series chips which would ship in BGA packages. So its safe to assume that these chips with Crystalwell eDRAM onboard packages would end up as part of upcoming Intel Haswell based NUC and All in One solutions. For mobile, only two Haswell chips would feature the GT3e GPU which include: 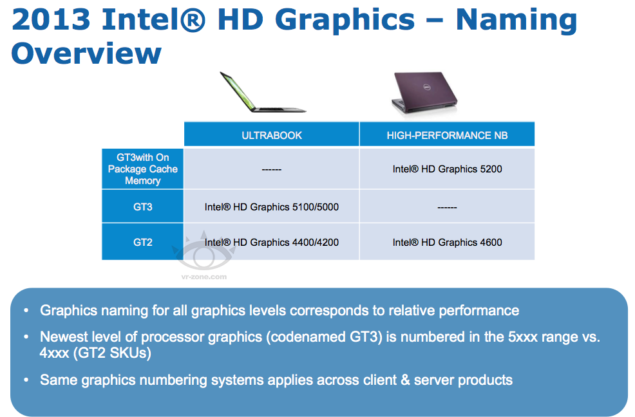 Other mobile variants come with either GT3 (40 Execution units) minus the eDRAM package and GT2 (20 Execution Units). Desktop LGA 1150 parts would be limited to GT2 chips however the R-Series as mentioned above would arrive with GT3e "HD 5200" solutions.The lineup would include (Full details here):

Intel Haswell would debut in June 2013. Intel presented alot of details at the IDF 2013 note which would be detailing soon!