An early review of an Intel Core i7 11700 (non-K) QS sample has leaked out courtesy of Odd Tech Reviews. The review is one of the first glimpses at Intel's upcoming Rocket Lake processors (which are the first Keller parts to hit the desktop market). That said, please keep in mind this is a QS sample used with non-final bios and microcode. In other words, while you can use this as a bare minimum performance level, it could very well not be indicative of final performance when the launch of the final version. As with all leaks - wait till further confirmation or independent third-party testing (or both).

Before we begin, here is the full version of the review:

First up we have the Cinebench R20 score, which is considered the bread and butter of compute benchmarks. This tests the absolute raw performance of any processor. The Intel Core i7 11700 QS closes the gap on the RX 5800X by a very large amount (it is just 500 points slower) and is roughly 12% faster than the Core i7-10700. These are very impressive results considering the Intel part is one full process behind AMD (14nm vs 7nm) and really shows the power of the Rocket Lake architecture. 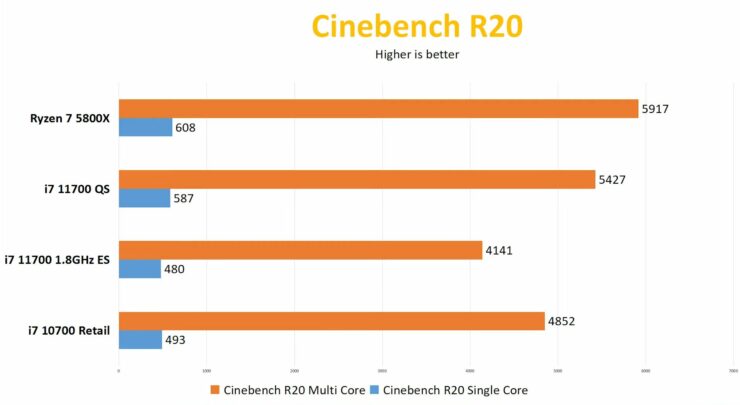 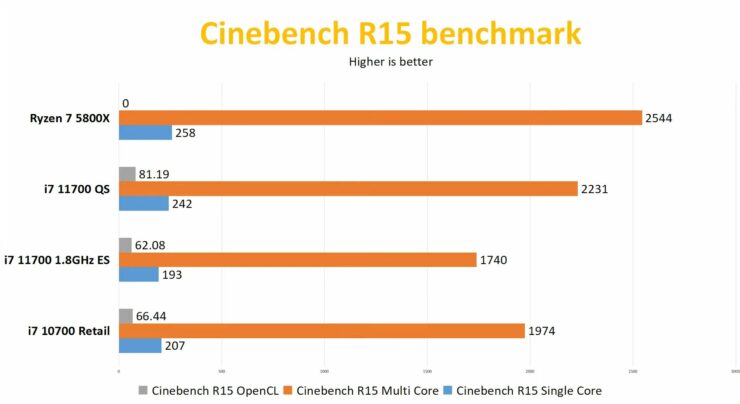 And for the geekbench lovers, here is Geekbench as well! 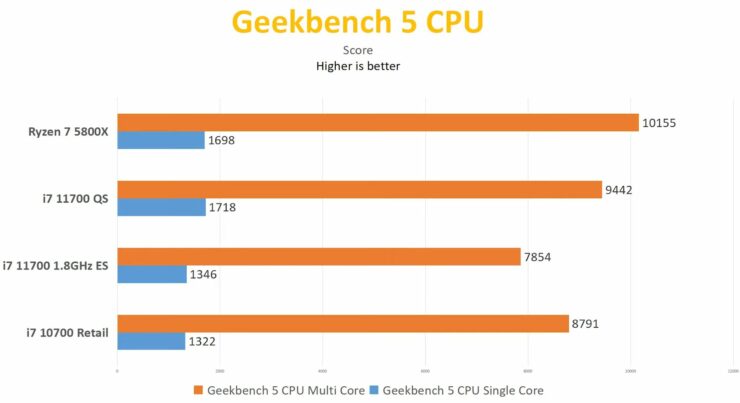 Up next we have some gaming scores. The Core i7 11700 performs much better here and actually trades blows with the RX 5800X - winning in some and losing in others. Let's start with Hitman 2, where the RX 5800X takes the lead by quite a wide margin. 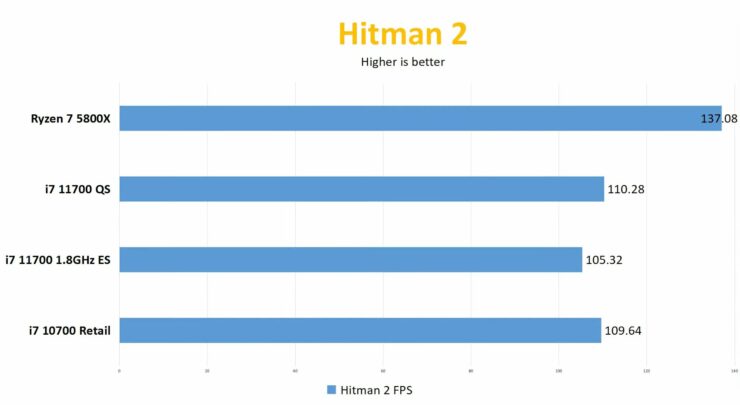 In the Unigine Superposition 1080p Extreme benchmark, the Core i7 11700 QS performs almost the exact same as a 5800X although it should be noted here that this configuration is GPU bound and not entirely dependant on the CPU. 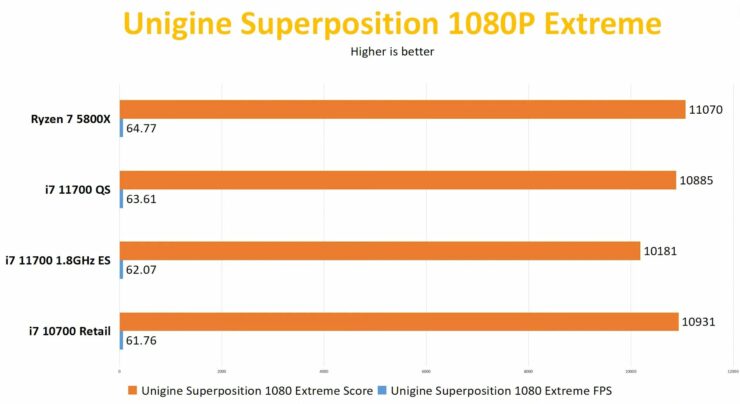 In Shadow of the Tomb Raider, the Intel Core i7 11700 QS takes the lead on GPU FPS but does not take the lead on CPU FPS. This is a contradictory situation and we are not entirely sure what would cause this. Since the GPU (and all other configurations) are the same, this likely means that some part of the Intel build is aiding the GPU in achieving faster rates. 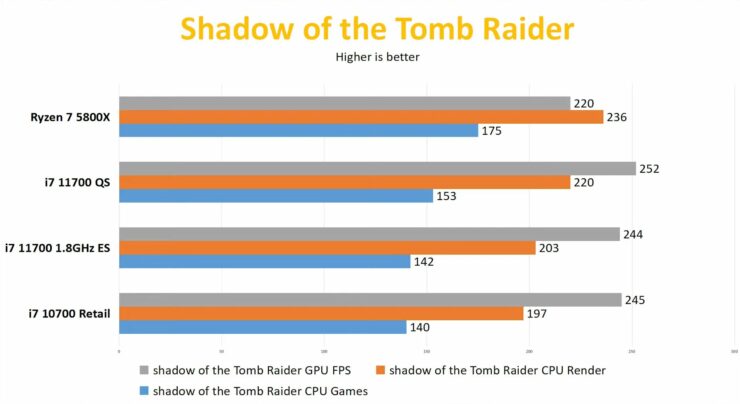 In Dirt 5, the Intel Core i7 11700 beats the Ryzen part by 5 frames. FYI this graph does not start at zero so the distance might seem exaggerated. 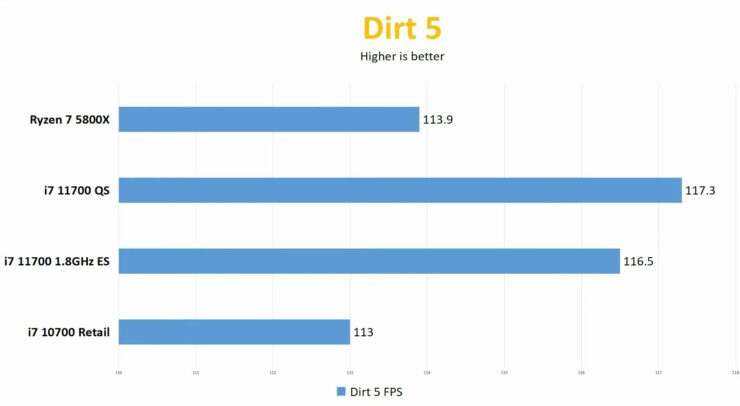 Finally, we have the 3Dmark Timespy benchmark where the CPU score of the Intel part is actually slightly higher than the Ryzen 5800X. 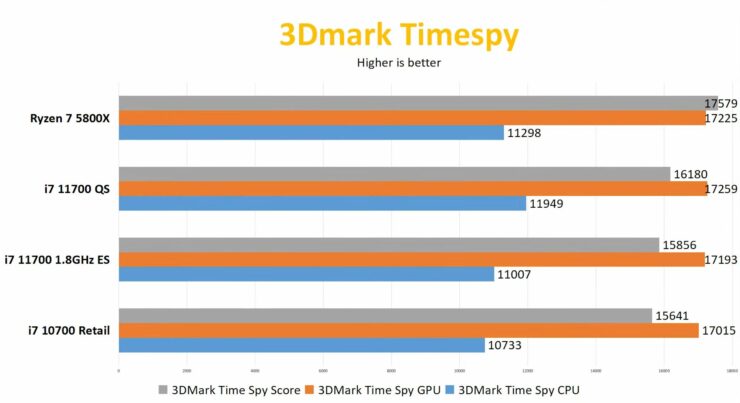 While these benchmarks showcase the QS sample of 11700, final bios and revision might improve these numbers and keep in mind this is a Rocket Lake sample that boosts up to 3.8 GHz all core. That is a super low score for an Intel 14nm CPU. When the 11900K flagships arrive - those can hit close to 5 GHz on all cores - which should paint a completely different story and unless I am very much mistaken - beat the AMD R9 5950X core for core.