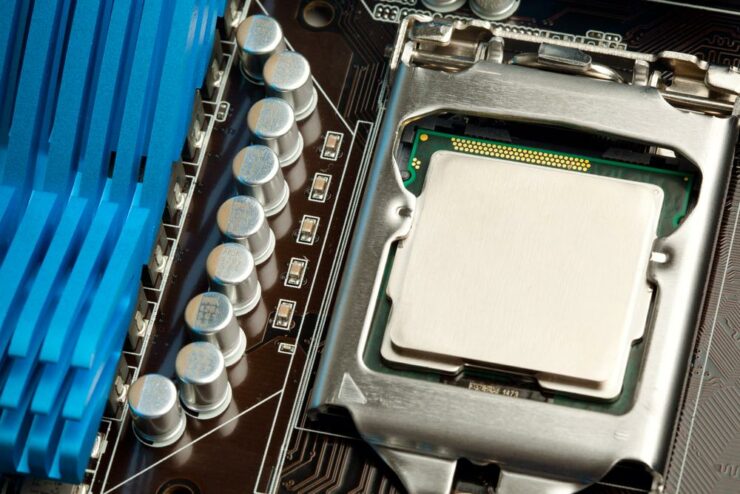 The first performance review of Intel's Core i3-7350K Kaby Lake processor has been published by Hardware Unboxed. Other Kaby Lake K-series processors have also been reviewed by other tech sites prior to NDA expiry which ends on 5th of January.

The Intel Core i3-7350K is an interesting part as it will bring overclocking back to the masses. Previously, Intel excluded overclocking support on Core i3 processors but due to emerging demand, they will be bringing it back. Intel’s Core i3 processors are generally one step ahead of their Pentium lineup and get higher clock speeds that result in better performance. In the past, we have seen Core i3 models featuring hyper-threading technology. With Kaby Lake, even some Pentiums would feature HT support.

Moving on to the specific model, we are looking at the Intel Core i3-7350K processor. The CPU is a regular dual Core variant with four threads since it has hyper-threading enabled. This chip has a maximum clock speed of 4.2 GHz out of box. 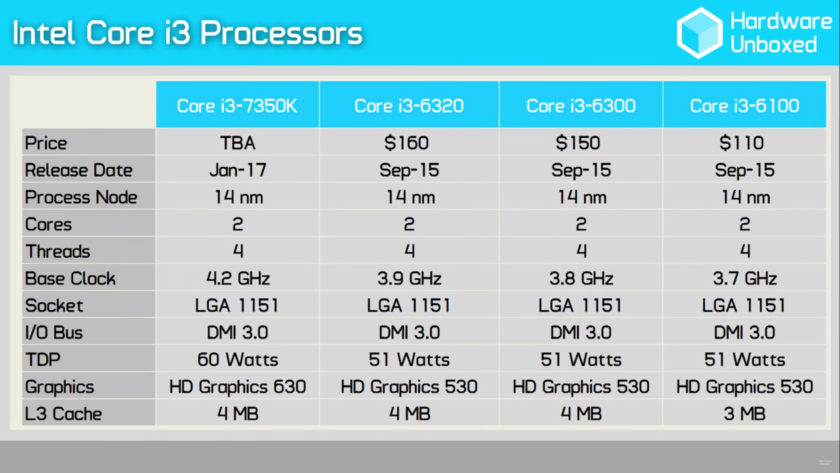 There's no boost clock on the Core i3 model which means that it will operate at the factory speed in all applications. The chip features 4 MB of L3 cache and would be unlocked. This would be the only K Series processor in the Core i3 Kaby Lake family. The TDP would be set at 60W which is 9W higher than last generation Core i3 models. 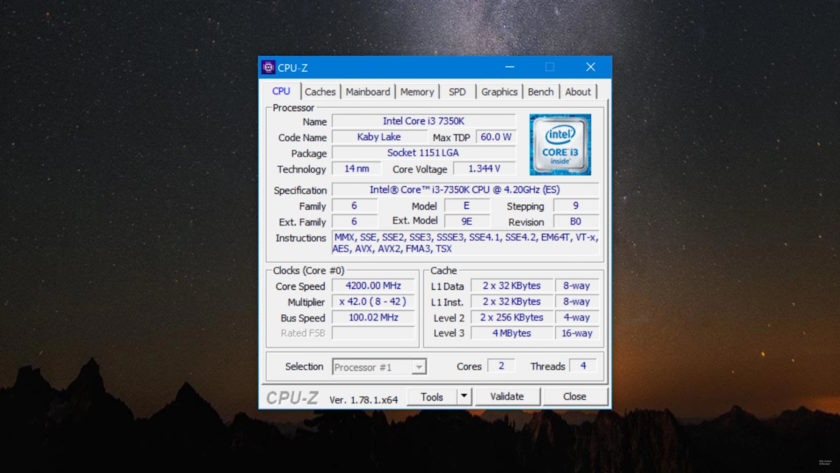 Pricing is suggested around $150-$180 US which is decent enough for entry level users who want to have fun overclocking.

Intel Core i3-7350K Performance Benchmarks - Faster Than Sandy Bridge Quad Cores But Is It Worth The Price?

The Core i3-7350K is a little surprise from Intel but it would cost close to $180 US which is a high price for a dual core chip considering that standard Skylake quad cores such as the Core i5-6400 retail at $185 US. The processor was tested at both stock and overclocked speeds of 4.8 GHz with a voltage of 1.280V and a hefty cooler. The temperatures for the chip at overclocked speeds remained under 70C which is something we also saw in the Core i5-7600K review but the Core i7-7700K goes past 80C when overclocked. 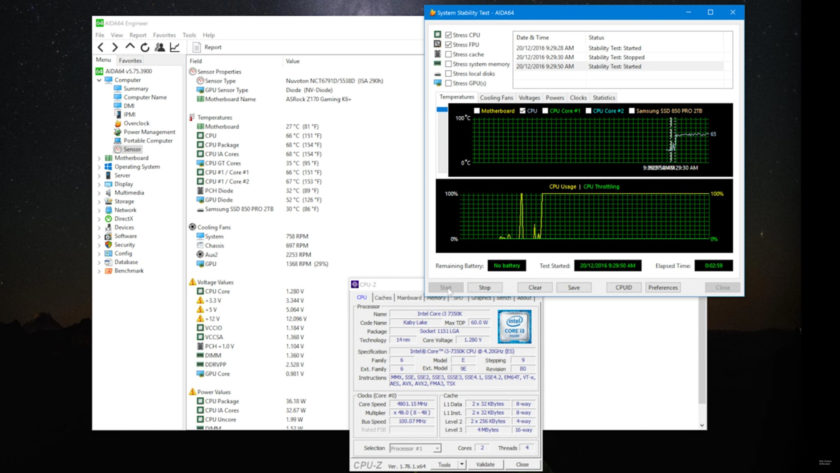 CPU benchmarks reveal that the Core i3-7350K has higher single-core performance close to the Core i7-6700K and Core i7-4790K at 177 points (stock) and 200 points (overclocked). In multi-threaded performance, the chip scores 459 cb points (stock) which is on par with a Core i5-2500K processor and 517 cb points (overclocked). The Core i5-4670K manages to deliver better MT performance due to an enhanced architecture over 2nd Gen Sandy Bridge processors. 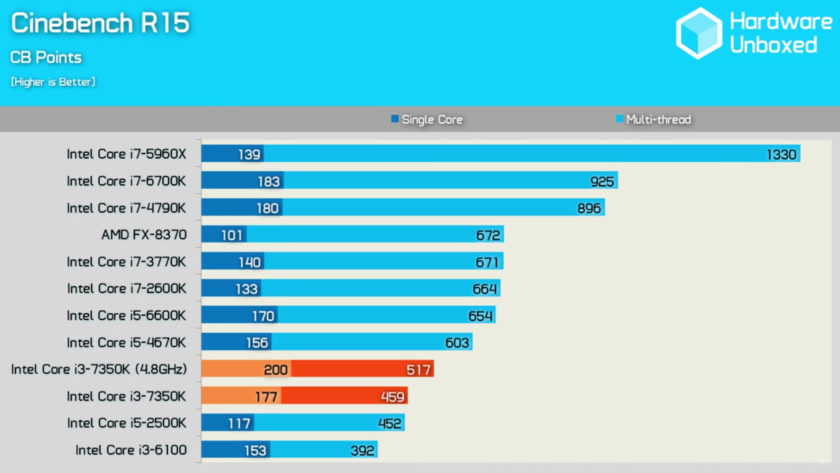 In Adobe Premier Pro CC, the chip has faster performance than the Core i3-6100 but needs to be overclocked to match the Core i5-2500K and AMD FX-8370 which score around 1100. Excel 2016 "Monte Carlo" workload shows the same result with the Core i3 chip besting a 2500K when overclocked. In PCMark 8, the chip is as fast as a Core i5-2500K at stock clocks and manages to get near a Core i5-6600K and Core i7-5960X when it's overclocked. Finally, we have SiSoftware Sandra 2016 memory bandwidth test where the chip delivers the same bandwidth through its IMC as other Skylake processors due to the dual channel memory design.

Gaming performance was evaluated using a GeForce GTX Titan X (Pascal) graphics card. The chip does bottleneck the card in several benchmarks such as Battlefield 1, Gears of Wars 4, Overwatch and Watch Dogs 2. It is no surprise since we are talking about a dual core, multi-threaded processor here. 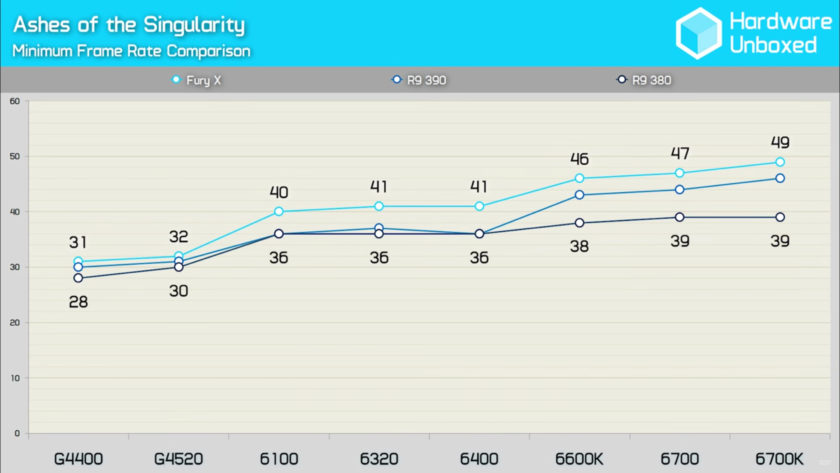 Power consumption shows that the Core i3-7350K is quite efficient but that efficiency goes to waste after overclocking. The chip consumes 49W in idle and 81W in load during general application usage. Overclocking in the same tests reports an idle power draw of 51W and load power draw of 147W which matches Core i7 Sandy Bridge and Ivy Bridge processors. Prime 95 shows even worse numbers with the chip consuming as much power as the Core i7-6700K when overclocked. At stock, it consumes around 97W which is a moderate power increase over 91W of the Core i3-6100.

The Core i3-7350K sounds like a decent chip for its performance but at the suggested price of $180 US, it may not be as good. There will be Kaby Lake quad cores retailing around $180-$200 US which would offer better bang for buck to users. Yes, you don't get the higher clock speeds of this specific model nor do you get overclock support but the quad cores will still be better at gaming than the i3 processor. Budget users who really want overclocking support should look forward to the Core i3-7350K, gamers should be looking into current gen Skylake or Kaby Lake Quad cores such as the Core i5-6400 or Core i5-7400.