The low power variants of Intel's offering is currently occupied with the Xeon E3 SKUs on the higher end of the spectrum and Atom C2000 on the lower end. However in 2014 these will be replaced by Broadwell CPUs, Broadwell SoCs and Denverton (Atom) Chips. Now we had heard about Broadwell-DE a long time ago and now thanks to CPU World, more details have surfaced.

Basically both Xeon E3 (Haswell) and Atom C2000 are based on the 22nm Node. And as you can quite clearly see in the roadmap shown below, they have TDP as low as 6W (13W in the case of Xeon E3). However by sometime in 2014 these two will be replaced by Broadwell, Broadwell SoC and Atom Denverton. Now the Broadwell SoCs will actually be called 'Broadwell-DE' and from the information leaked by CPU World, they will be part of the Grangeville platform for the micro server market and embedded solutions. Broadwell-DE will house actual Broadwell Cores and will feature a Platform Control Hub (PCH). They report seeing a diagram with 8 cores and 1.5 MB of L3 cache each, equating to 12MB of L3 cache. Broadwell-DE supports all the techs that come with the name, including Hyper Threading, Tubro Boost, VT-x/VT-d Virtualization and Trusted Execution. AES and AVX2 are present as well. The new things about these cores are related to security and include Processor Trace which can capture ''details of code execution'', supervisor mode access prevention and more. 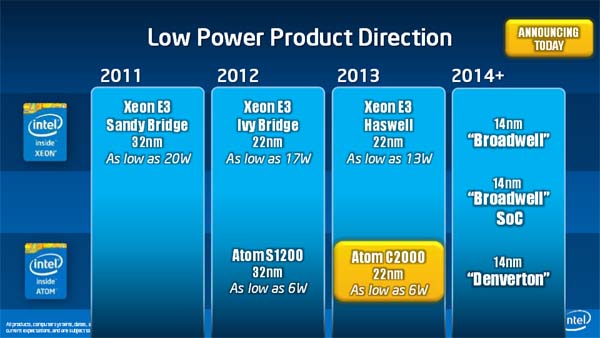 Now heres the thing the last time we heard of Broadwell-DE, it had support for 15+ Cores / 30 Threads. It also had support for upto 24 RAM Slots per CPU. So if you have a system with 4 CPUs you have a total of 96 RAM slots. Which means you can literally use RAM as a storage medium for lightning fast processing. However CPU World's info is slightly conflicting and I am not sure what to make of it: Broadwell-DE supports DDR3L and DDR4 Memory. Each channel has 2 DIMMS and its a Dual Channel Controller so you have a total of 4 DIMM Slots. The i/o block includes a 10 Gigabit Ethernet controller and 24 lanes of PCI-E 3.0. The SoCs will be manufactured in the BGA Packaging. However they did say that this was just one diagram so fingers crossed.

Details on the elusive #Intel Broadwell-DE and what happened to 15+ Cores? :/ http://t.co/AJwuAGsuO6

New Tales from the Borderlands Drops in October, Will Focus on a Fresh Trio of Characters