It has been quite some time since the official Skylake launch, but the SKUs were very difficult to spot on popular e-tailers like Newegg.com. It would seem like the processors have finally hit the shelves (in full force) because Newegg.com, amongst other retailers, is now listing (via TechReport) not only the Skylake unlocked family, but Broadwell as well. It is worth mentioning that the Broadwell i7 processor is faster in gaming performance than the Skylake flagship, has 128MB of L4 cache, and priced higher because of all of the above. 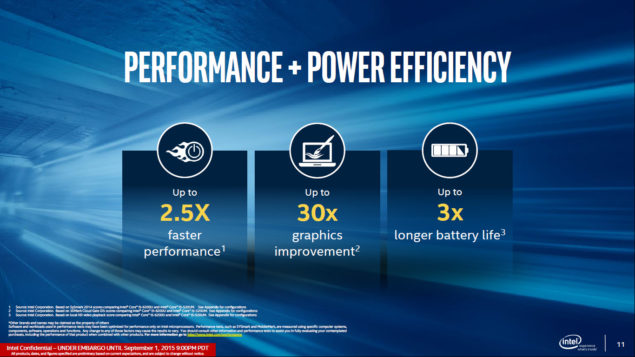 A slide from Intel's slide deck showing off the improvements over the last uArch. @Intel Public Domain

Skylake has been a tremendousness win for Intel. Not only did it manage to not-be another Haswell, but it managed to impress the B2B chain of AIBs as well, scoring quite a flurry of designs. While the architecture has undoubtedly proven to be a rain maker for Intel, it was Broadwell that offered the real surprise. The Core i7 5775C, equipped with 128 MB of eDRAM, has shown huge potential in the gaming segment. Currently, it outperforms the Skylake i7 flagship (Core i7 6700k) by a decent margin, thanks to its Crystalwell L4 Cache. Due to the strong demand, and undoubtedly worse yields than the Skylake variant (due to the onpackage eDRAM), it is currently selling at a premium price of $420 at Newegg.

This is ofcourse, quite a huge premium and it is a subjective matter whether the price justifies the increased performance. The Braodwell flagship is also the processor with the best Integrated GPU (currently), rocking the Intel Iris Pro 6200 chip and surpassing its successor easily. It is also worth adding that the Braodwell Core i7  5775C, while an insane gaming CPU, does not overclock very well with the average enthusiast having trouble passing the 4.1 Ghz mark. Please note that Intel's MSRP is actually $377 (including the HSF), as mentioned on the ARK portal. The Core i5 5675C with 4MB of L3 cache is also available at $320 at Newegg.

As far as the Skylake family is concerned, the architectural improvement is pretty much a streamlining of Broadwell, minus the eDRAM. The processor is amazing in terms of multi threaded and general performance but falls behind Broadwell in terms of gaming performance. It is however, a better overclocker than its predecessor and is currently selling on Newegg for $370. All processors mentioned in this article were fabricated on Intel's (yes, true) 14nm process, although, one is more mature than the other. Given below is the full list of the Skylake lineup that Intel has revealed. Every single processor should be available by now, if there is a certain SKU missing, it should have retail/oem availability by next week.