Specifications of the Intel Arc Alchemist Mobility GPU lineup seem to have leaked out and reveal a total of five SKUs for high-end & entry-level notebooks.

The latest leak comes from HXL (@955pro) over at Twitter, who has discovered an alleged slide that lists down the memory configurations of Intel's upcoming DG2 'Xe-HPG' powered Arc Alchemist line of chips. The specific variants listed include all mobile GPUs so specifications for the desktop chips are going to vary slightly (clocks, memory speeds, voltages, etc). 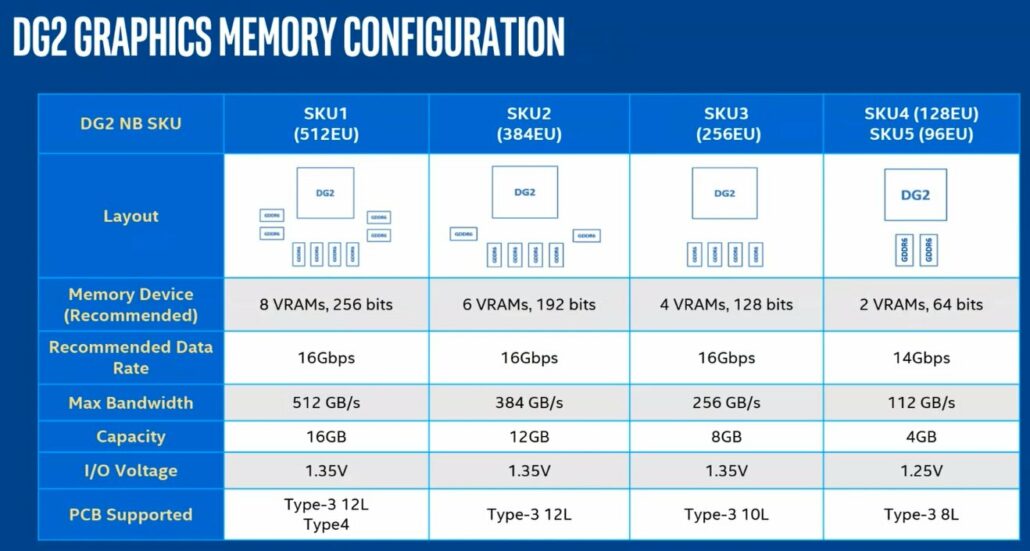 So starting with the specifications, the flagship Intel Arc Alchemist mobility GPU is going to rock the DG2-512 core which features 32 Xe-cores, 512 Execution Units, and 4096 ALUs. The GPU will come with 16 GB GDDR6 memory clocking in at 16 Gbps speeds across a 256-bit bus to offer 512 GB/s of total bandwidth. The I/O voltage for the chip is suggested at 1.35V and it will rely on a Type-3/4 12-layer PCB design.

Performance-wise, this chip should be around the same level as the RTX 3070 Ti or even the RTX 3080 Ti mobility GPUs considering that those are around RTX 3060 Ti / RTX 3070 (desktop) performance level. Intel is offering the full-fat configuration of its DG2-512 on mobile so that's going to be a heated battle between NVIDIA's and Intel's top-end mobility GPUs.

Moving onward, we have another Intel Arc Alchemist GPU that is based on the same 'SOC1' SKU but in a cut-down configuration. This chip features 24 Xe cores, 384 Execution units & 3072 ALUs. The chip is configured with a 12 GB GDDR6 memory layout that operates at 16 Gbps across a 192-bit bus interface with a total of 384 GB/s bandwidth.

Intel is expected to introduce its Arc Alchemist DG2 GPUs later this quarter and it's looking like the mobility variants will be first to hit the shelves followed by a grand launch on the desktop platform. You can read more details on the Intel Arc Alchemist GPU lineup here.