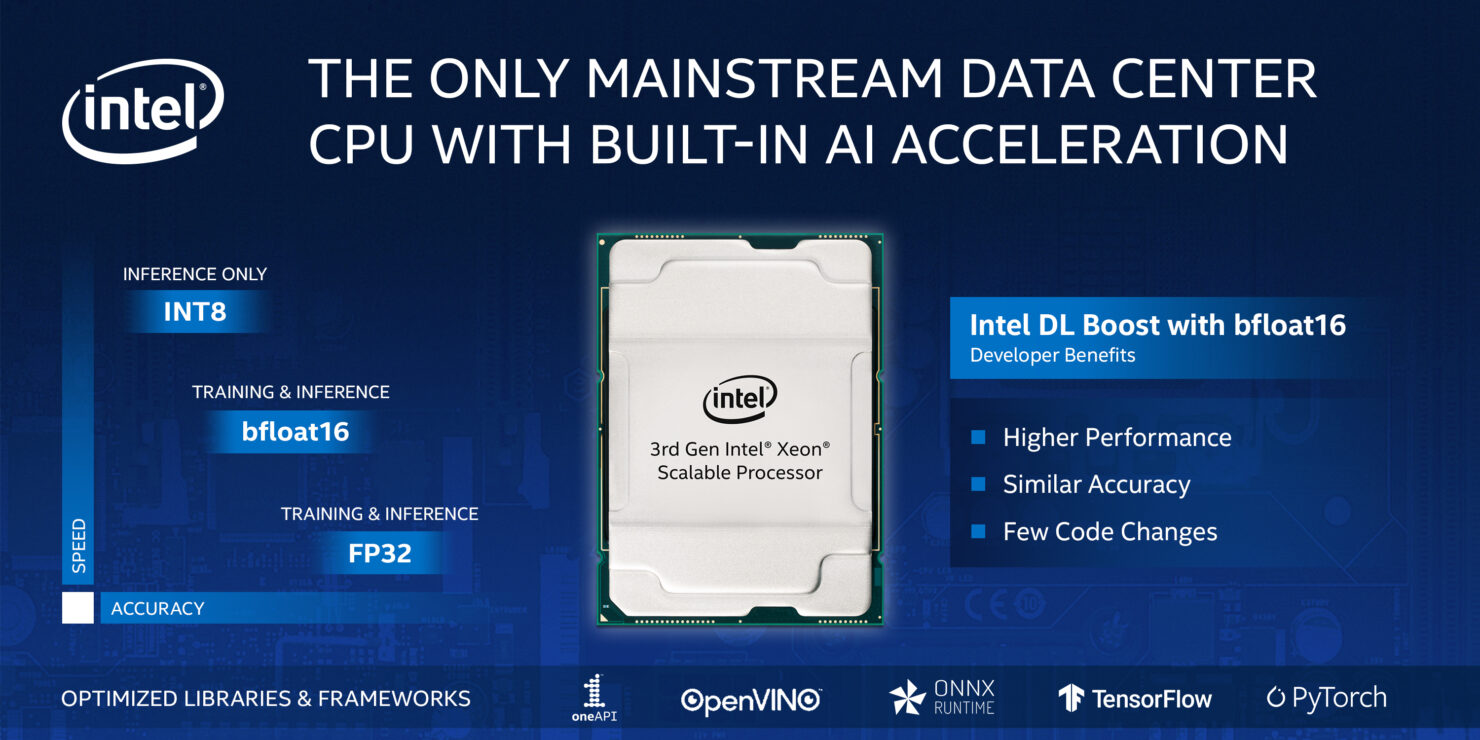 Intel has officially announced its 3rd Generation Xeon Scalable family codenamed Cooper Lake-SP. Based on the 14nm architecture, the Cooper Lake-SP family expands upon the Cascade Lake family by offering higher clock speeds, more advanced AI technologies, and scalability all the way up to 8S configurations on the Cedar Island platform.

During the press briefing on the 3rd Gen Xeon family, Intel termed them as the most advanced CPU for AI-specific workloads. We will look at what's new and what kind of performance advantages the Cooper Lake-SP family brings but first of all, let's talk about the platform itself. The Cooper Lake-SP CPUs will be supported by the Cedar Island platform that makes use of the LGA 4189 socket (socket P+).

This is by far the largest LGA socket that Intel has made and will be featured on two platforms, the Cedar Island which I just mentioned above and the Whitley platform for Ice Lake-SP processors that Intel says will also be launching later this year with first shipments being made in mid of 2020. The Cedar Island platform supports 4-way and 8-way CPU support which will be interconnected with a UPI (Ultra Path Interconnect). The CPUs will be connected to the Intel C620A chipset through DMI & the chipset itself will feature up to 20 PCIe Gen 3 lanes, 10 USB 3.0 ports, and 14 SATA Gen 3 ports. 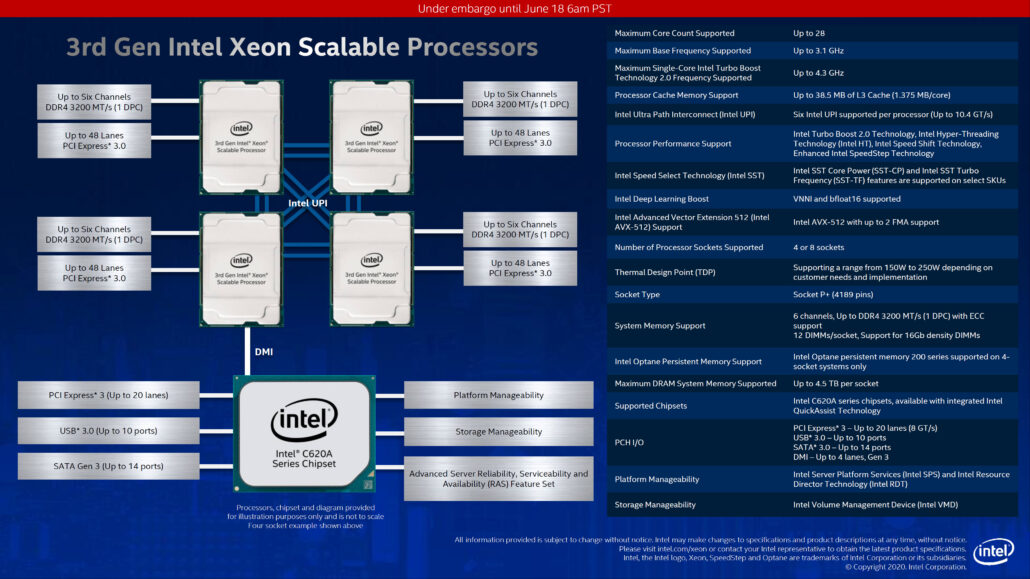 As for the CPUs, they will offer up to six-channel memory support in DDR4-3200 (1 DPC) or DDR4-2933 (2 DPC) modes. The Cooper Lake-SP processors will feature up to 48 PCIe Gen 3.0 lanes. A list of other features such as AVX-512 (Up To 2 FMA support), bfloat 16 for built-in AI acceleration and new Intel SST (Speed Select Technology) features which will allow users more control in optimizing processor performance depending on their workloads.

The Xeon Platinum 8300 CPUs support both 4S and 8S configurations. The flagship SKU is the Xeon Platinum 8380HL which features 28 cores, 56 threads, and a total cache of 38.50 MB. The CPU has a base frequency of 2.9 GHz and a boost frequency of 4.3 GHz while operating at 250W. There are 2 variants of this specific chip, the HL and the H. The HL variant features up to 4.5 TB capacity while the H variant features 1.12 TB memory capacities. The frequency optimized Xeon Platinum 8376HL and 8376H retain the same core configuration but ship with lower base frequencies of 2.6 GHz that results in a lower TDP of 205W. 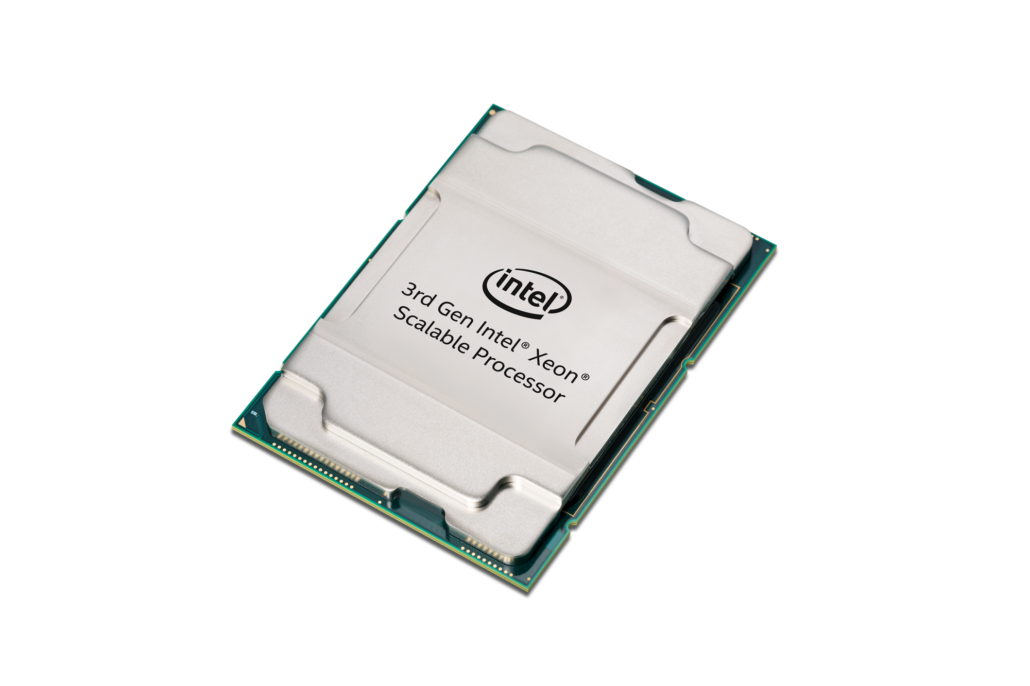 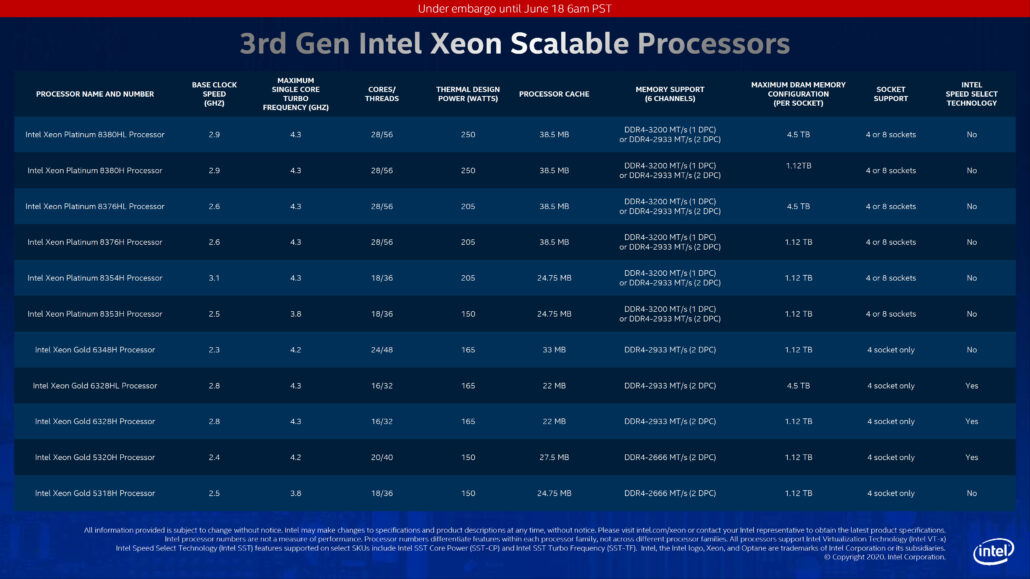 The Cooper Lake-SP CPUs deliver similar accuracy to FP32 at faster speeds and minimal software changes are required to support them. Intel expects over 100 optimized topologies for 3rd Gen Xeon SP CPUs which will further help increase the adoption rate of DL Boost. In Resnet-50, while DL Boost Enhanced provides a huge boost over last generation processors, so does AVX-512 which has around 30% gain in training and around 10% gain in inferencing performance.

Another key advantage of the Cedar Island family which as stated above is support for up to 8 CPU configurations which will result in up to 224 cores and 448 threads. That is almost twice the cores & threads of competing platforms. There is a magnitude of workloads which these CPUs are aimed at but we can dismiss the fact that while Intel acknowledges greater efficiency and lower TCO with its Cooper Lake-SP family, they still need to be compared with AMD's 2nd Gen EYPC Rome lineup in terms of price, performance, and efficiency.

Currently, AMD's EPYC CPUs demolish Intel in terms of performance per watt, a number of cores/threads, feature set, and total cost of operation with major players in the server segment switching their cloud datacenters to AMD's EPYC CPUs.

With that said, Intel also plans to introduce its 1S/2S Whitley platform which will support 3rd Gen Xeon Scalable Ice Lake-SP CPUs. Intel says that Ice Lake-SP CPUs will deliver generational platform and technology advancements in 2020 & beyond for mainstream server use cases. This will be around the same time when AMD will be introducing its 3rd Gen EPYC family codenamed Milan which is going to utilize the Zen 3 CPU architecture to further leverage IPC & feature set over the existing Rome chips.

In addition to the 3rd Gen CPUs, Intel also announced a range of other products that are optimized for the Cedar Island platform. Starting off with the Optane Persistent Memory 200 series which are said to deliver a 25% increase in bandwidth with capacities of up to 512 GB. The Barlow Pass DIMM will operate between 12-15W TDP and come in three flavors, 128 GB, 256 GB, and 512 GB. The 2nd Gen Optane memory uses AES-256 encryption and optimized for productivity suites in data center. 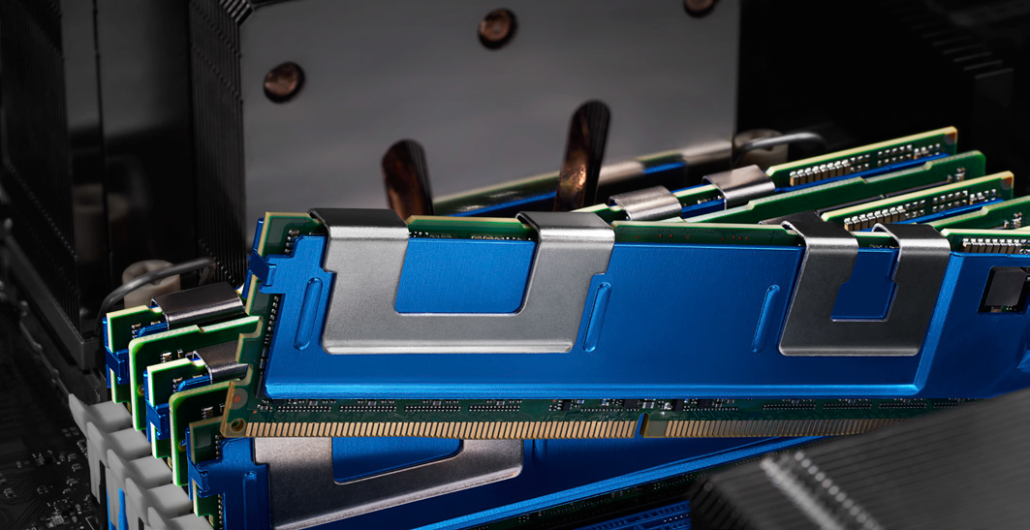 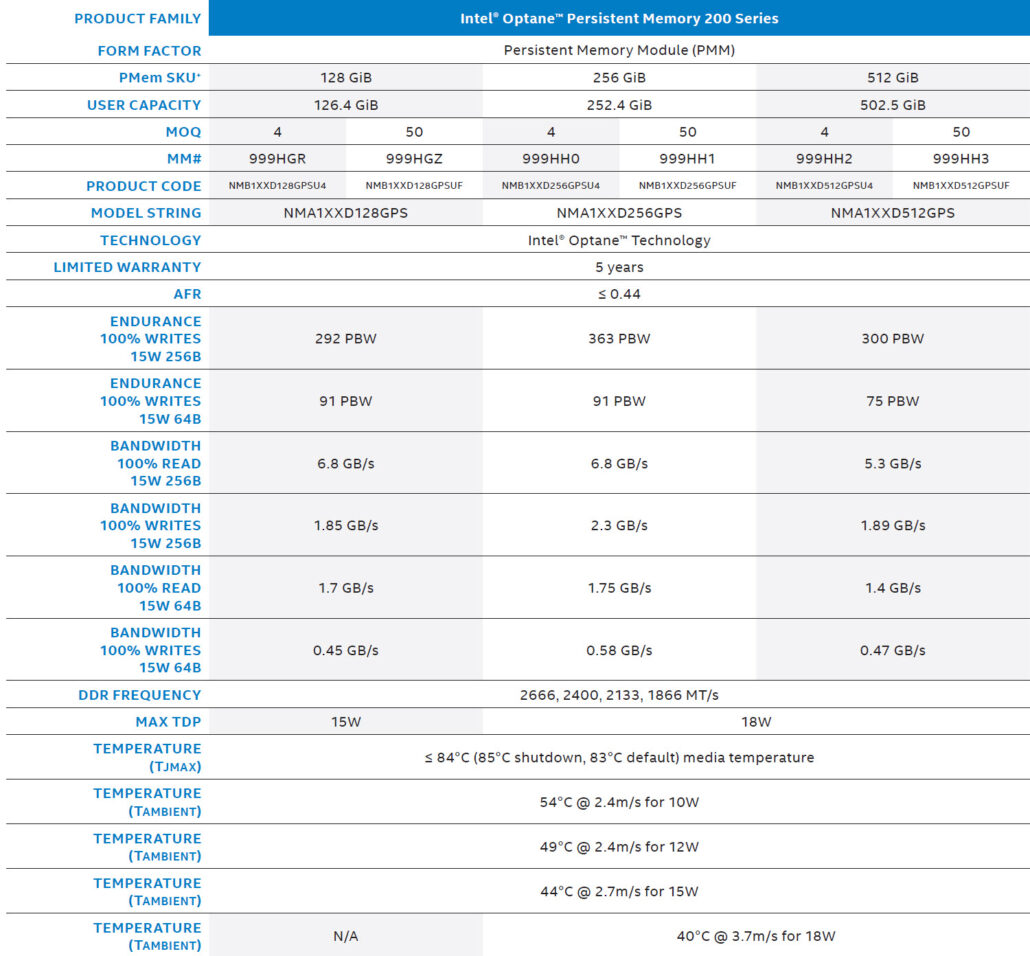 Finally, Intel also announced it's Stratix 10 NX FPGA which is based on the 14nm process and focuses on high-performance AI workloads. The FPGA makes use of an advanced AI Tensor block which delivers up to 15x more INT8 throughput than the Intel Stratix 10 FPGA, which comes with embedded memory hierarchy and HBM standard. The FPGA also features up to 57.8G PAM4 transceivers and hard Ethernet blocks for high efficiency. The AI tensor block introduced within the FPGA has base precisions of INT8 and INT4 and also supports FP16 & FP12 formats.