We have just received a massive leak concerning 5 Intel Platforms and their road maps for 2014. It appears Intel is going completely tablet crazy in the next year! This is not all that surprising since analysts are forecasting massive expansion in the mobile sector, it also appears that Intel is not making the same mistake as it did with Atom (shunting it to the sidelines). 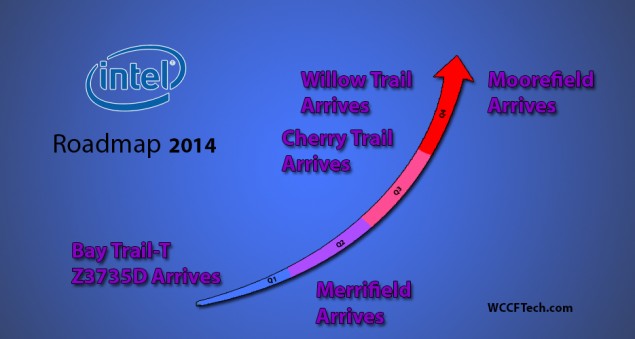 The Second Leak states that Intel will launch its Smartphone Platform Codenamed " Merrifield'' in Q1 2014 as well. This will be based on the 22nm process and built with full compatibility with the Android Platform.

The Third Leak states that Cherry Trail will arrive in September 2014. It will be unveiled at the IDF Conference in Sans Fransisco and usher in 14nm Fab Process along with Airmont Architecture (64 bit). Target Windows 8/8.1 and Android Devices will range around $250.

The Fourth Leak states that Willow Trail will arrive in Q4 2014 and will be the 'tock' in Intel's Tick-Tock mechanic. Fabrication will thus remain the same (14nm) but Goldmont architecture will be used instead. We were genuinely startled to hear this, since this refresh comes barely a few months after Cherry Trail. We are not sure whether releasing two platforms so close to each other is a good idea.

The Final Leak states that a new Smartphone Platform, probably Merrifield's Refresh will arrive in Q4. It will be codenamed "Moorefield" and have the same target devices.