Infinity Ward: Zero-G Combat Is Fast & Exciting, We Talked To People in the Space Industry To Do It 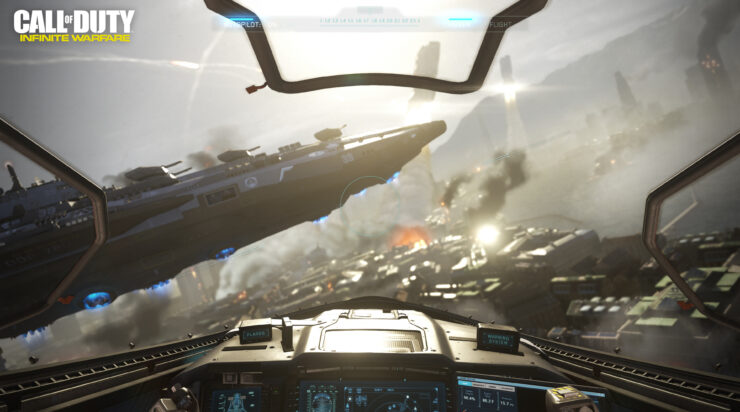 Call of Duty: Infinite Warfare was quickly obfuscated by Battlefield 1, both in terms of exposure and reception. That doesn't mean no one is interested in the next game by Infinity Ward, of course, and the game does feature some things that the main competitor doesn't. Zero-G combat is one, and Design Director Jakob Minkoff explained it in an interview with Forbes.

For Infinite Warfare, we’ve developed zero-g combat that is fast and exciting. As a SCAR, a spec-ops soldier trained to fight in space, you have the use of a grapple and RCS thrusters on your suit. These allow you to quickly cross open spaces and get cover. Once you find a good vantage point, you have mag-boots that allow you to lock onto surfaces no matter which way they are oriented. You can grapple to the ceiling above your enemies and fire down on them from above, getting a vertical flank on them and invalidating their cover. It’s quick, frenetic, and a new challenging addition to the traditional Call of Duty combat loop.

Narrative Director Taylor Kurosaki added that Infinity Ward got in touch with people in both the military and space industries in order to craft an authentic experience.

We’ve talked to a ton of people both in the military and in the space industry. We’ve worked with production designers who have combined the NASA aesthetic with the military warship aesthetic. If we are taking players beyond Earth, it needs to feel as real as possible and that means bringing the familiar with us into the unfamiliar. If we’ve done our job in the end, they’ll have an awesome time when they jump in.

Call of Duty: Infinite Warfare also features dogfighting, for the first time in the series, and it will be conducted both on-rails and in a free-roaming fashion at different times. The game is due to launch on November 4 for PC, PlayStation 4 and Xbox One; expect a lot of footage and new information coming out of E3 2016.