The onset of MWC in Barcelona has finally started to bring its fair share of launches and upgrades that show us how fast things evolve in the smartphone, or the tech world in general. We've finally gotten to take a look at Samsung's Galaxy S7 and Galaxy S7 Edge, LG's G5 and a variety of devices from the Japanese manufacturer Sony. For mobile GPUs, Imagination Technologies has also announced its PowerVR Series 8XE Family. 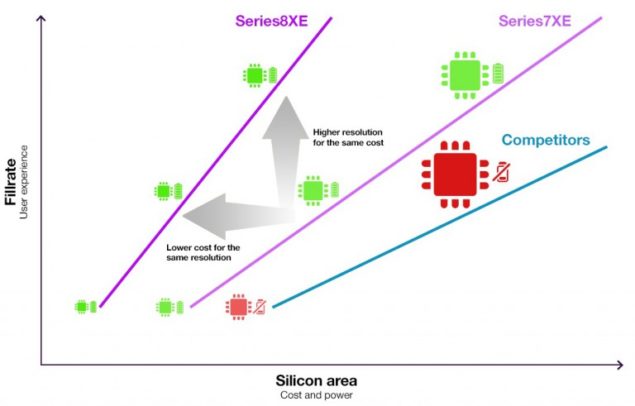 While the major focus of the past couple of days has been flagship smartphones, its nevertheless safe to say that entry and middle level devices are truly what make the core of global smartphone sales. To cater this segment, Imagination Technologies has upgraded its PowerVR XE GPU lineup and launched the PowerVR 8XE GPU series at the MWC.

This marks a shift in strategy for the company, as previously we've seen both the PowerVR XE and the PowerVR XT families launched together. Perhaps the company has got something very highly secretive for the XT lineup this time around or maybe things aren't final on the lineup. So today we get to see what upgrades have been brought on the 8XE lineup.

The key essence of the 8XE lineup is to bring more flagship level features to entry and middle level devices according to the company, and to achieve this, Imagination has made some very precise changes on the GE8200 and GE8300. For starters, the 8XE series manages to achieve the same pixel fillrate with a 25% reduced silicon area, to drive down costs without affecting overall performance. 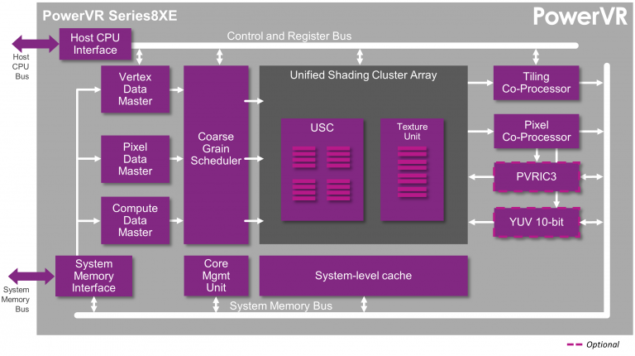 The comapny also claims that the 8XE series can double the fillrate performance offered per mm^2 when compared to some of the other offerings out there. The lineup also sees OpenGL ES 3.2 and support for Vulkan brought on board. This should open up a lot of applications and games in particular for middle-entry level users. We also see OmniShield make it on board the lineup, indicating a more serious approach towards lower cost devices.

The addition of Vulkan on the 8XE lineup will also enable manufacturers to further improve the chipset's processor owing to reduced driver overhead. Moving towards the two GE8200 and GE8300 designs, the 8200 brings 2 pixels/clock, 8 pipelines and the 8300 coming with 16 and 4 pipelines and pixels/clock respectively. These mark subtle changes to the 8XE lineup aimed towards adding a couple of critical features to the devices that'l end up using them rather than drastic changes.

Finally, just as the PowerVR 8XE series becomes available, Imagination's already got partners lined up to bring its designs and offerings to the table. One of these will be MediaTek, whose unique chip designs are known all around. According to Joe Chen, Executive Vice President and Co-Chief Operating Officer at MediaTek: “Imagination’s PowerVR XE families of entry-level GPUs are designed to deliver the right feature set at the right price point for the next generation of connected devices. MediaTek is delighted to be working with Imagination to bring the benefits of Series8XE GPUs to manufacturers and consumers worldwide.”