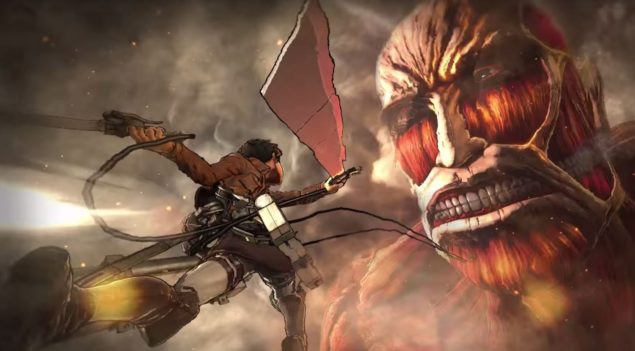 Let's face it: it was just a matter of time before Attack on Titan, the popular anime series, became a videogame as well. In case you're not familiar with it, Attack on Titan's world is one where humans are confined into walled cities as defense against Titans, gigantic humanoids who are happy to eat humans without any apparent reason.

At Gamescom 2015, Koei Tecmo's president and head of the project Hisashi Koinuma announced the adaptation with these words:

I am very happy to reveal we have started developing a new action game based on the phenomenally successful "Attack on Titan"! Having evolved from a manga/anime series to an internationally recognised brand, we were enchanted by the opportunity to create our own take on humanity’s last stand against these overwhelmingly powerful beings, the Titans.
Although there is still a long wait until this game is released in 2016, our studios are already pouring all of their passion and excitement into it and we hope to reveal more information soon!
In the meantime, prepare for battle! The Titans are coming.

Yesterday, Gematsu posted the game fact sheet which highlights the main features you can expect.

Attack on Titan is being developed by Omega Force, which recently worked on Toukiden, Samurai Warriors 4 and Dynasty Warriors 8: Empires. The first release will be in Japan this Winter, with Western countries due to get the game at some point in 2016; PS3, PS4 and PS Vita versions have been confirmed so far, but with many Koei Tecmo games being ported on PC it wouldn't be a surprise if it happened again.

Check out the first screenshots below.