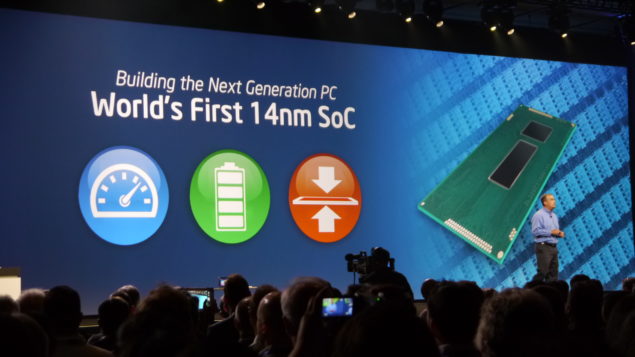 In addition to the 14nm Broadwell SOC, Intel also showcased their latest 22nm Haswell-Y chips which are based on the 3D Tri-gate transistors architecture. The new Haswell-Y processors have a max power consumption of 4.5 Watts which mean it would be used to deliver fanless mobile solutions such as laptops and slate-tablets which are high in demand at the moment. Haswell has already showed its power in the desktop and mobile sector and it will do the same when equipped inside these low-power devices delivering users a true x86 experience.

But the most exciting part about the whole conference was that Intel is definitely going to bring Broadwell early next year which shows that there are no delays between the new micro architecture as previously rumored and Intel's Tick-Tock strategy still remains strong. SoCs are quickly becoming a powerful rival in today’s market, with Avaton targeting high efficiency low power server market the Atom Cherry Trail and Bay Trail are designed for mobile devices. With that in mind delivering graphical performance is a must and with Airmont and Broadwell GPU Architecture the Cherry Trail SoC will not disappoint. We expect the processing power to graphic power ratio to be near that of AMD’s APUS. Cherry Trail is expected to debut in Q3 2014. Broadwell would deliver 30 percent power improvement on battery longevity as compared to Haswell.

Intel's Broadwell U/H/Y series mobile chips and the desktop chips would be compatible with the Z97 and H97 chipsets which would offer support for SATA Express and new set of utilities to deliver a better experience and performance to consumers. Expect more news on Broadwell in the upcoming months.