Looking at the space around us we see a lot of things, but have you ever noticed that how almost everything in space is round in shape. I’m sure you haven’t given it a lot of thought but it actually is true, consider black holes, planets, stars and comets among others, everything is round. It’s amazing how everything is spherical or rounded in some way and that is all because of the pull of gravity on the objects. However, if you’re an astronomical enthusiast you’ll know that there is a Red Rectangle which is basically a system 2300 light years away from the Earth and it kind of looks like a giant square in the sky.

The Red Rectangle is just a star on its death bed

For some time now researchers have wondered the core reason behind this space anomaly and what causes the Red Rectangle’s mysterious but unique shape. They have finally found an answer which was all thanks to the Hubble telescope; the telescope provided the researchers with a clear snap of the anomaly. The telescope revealed that the Red Rectangle is really a binary system shooting off dust and making a shape similar to the letter ‘X’.

According to the reports, NASA explained how this Red Rectangle is just a proto-planetary nebula, meaning thereby that the system’s star, named as HD 44179 is close to its life ending stage and is soon going to change into a white dwarf.

However while nearing the ending stage of its life, the stars tend to eject a gas into the space region and also in this particular case, since HD44179 is a close binary system, the gas that It ejects into the space tends to form the shape of an ‘X’ in a strange way.

"Red light from glowing hydrogen was captured through the F658N filter and coloured red," explains the team. "Orange-red light over a wider range of wavelengths through 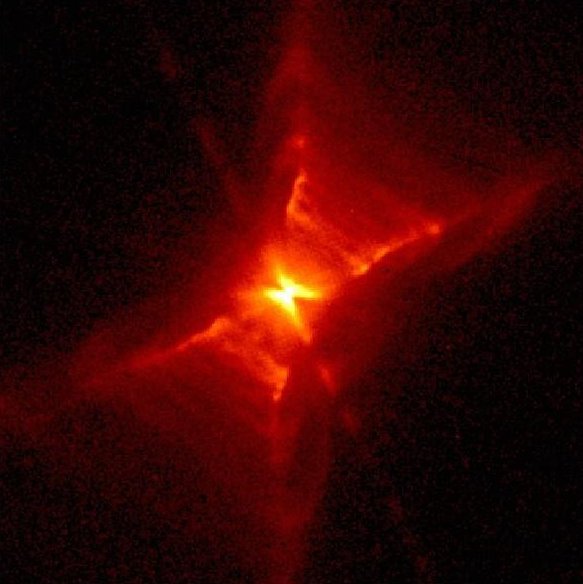 This is great news for the researchers because they have cracked the code and have finally have an answer regarding the strange shape of the Red Rectangle and why it reacts the way it does. Along with that the image released shows how the Sun will eventually lose its mass in a similar manner and will become a white dwarf too. But luckily that isn’t going to happen anytime soon!