Huawei’s Honor 6 Plus To Be Announced In April. Price Tag Of Approx. $403

Rising Chinese smartphone star is not yet finished releasing a flurry of additional smartphones. After the company launched its P8, P8 Max and P8 Lite, Honor 6 Plus is next in line for the month of April. Honor 6 Plus will most likely be showcased on April 28, at the KLCC event. In comparison to the company’s Honor 6, there are more than a few differences separating both handsets. Honor 6 Plus possesses a 5.5 inch screen size, classifying the smartphone in the phablet category.

The 5.5 inch screen size of Honor 6 Plus will be rendering the 1080p resolution, and its Kirin 925 SoC will possess the following quad-core processors:

Huawei’s 5 inch Honor 6 possesses a Kirin 920 which is running the exact same processors, at a lesser clock speed. While both smartphones possess the same amount of RAM (3 GB), Honor 6 Plus sports better camera technology, and for all those who purchase handsets because they are smartphone camera ‘connoisseurs’, the following information is something that you should heed well. According to Soyacincau, the upcoming phablet is armed with two 8 megapixel sensors. The company likes to refer to the technology assimilated in the camera sensors as symmetrical dual camera tech.

Both sensors are able to provide faster focus lasting for a period of just 0.1 seconds. The feature is ‘near congruent’ to HTC One’s Duo-Camera feature. If you intend on purchasing Honor 6 Plus (assuming you have a penchant for large screen smartphones), you will find that that you made the sensible decision when image capturing prowess is concerned. Unlike Honor 6, Honor 6 Plus allows smartphone camera users to apply depth of field effects after they have successfully snapped an image. 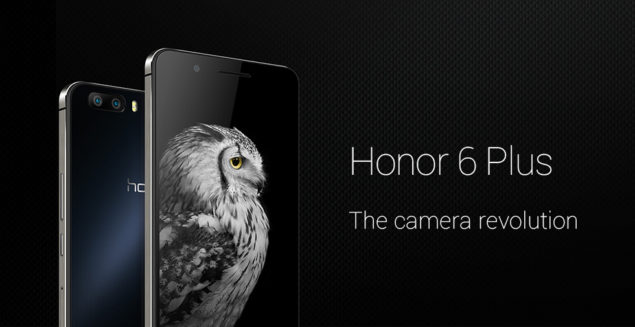 As for the front camera sensor, it is an 8 MP Sony BSI, designed to snap better selfies and improved image quality when video calls are taking place. The 5.5 inch screen size warrants a large battery, and Huawei was generous enough to incorporate a 3,600 mAh one, which will provide battery life to last a period of 24 hours. There are some drawbacks of owning the handset. For starters, it is void of Google’s Lollipop 5.0 update and only features an 802.11 n (dual-band capable) Wi-Fi adapter.

The upside of owning it is that the 4G dual-SIM version be priced at approximately 2,499 CNY (which is about $403 USD). Currently, Huawei has not given word on whether or not Honor 6 Plus will be available to purchase in the western smartphone markets or not. Looks like we are going to have to find out soon enough.