HTC One M9’s Promotional Videos And Pictures LEAK! Showcase What To Expect From Upcoming Device

Looks like one device is eager to get ahead of the rest when it comes to leaks. And not, its not the Galaxy S6, as you'd expect to believe over the past couple of months. Rather, its the second anticipated launch at MWC this year, the HTC One M9. HTC's flagship seems to have leaked in its entirety when it comes to design, courtesy of the notorious Upleaks. You can take a look at the screenshots of HTC's official promotional videos below. 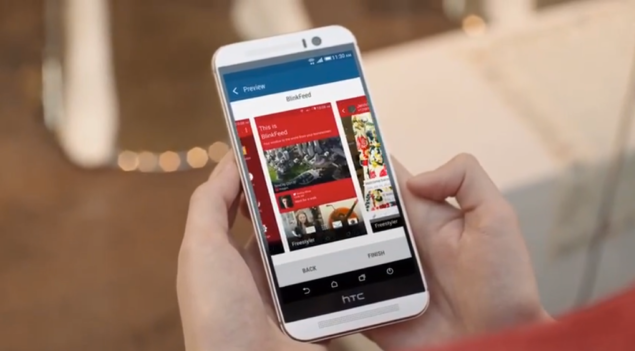 HTC's Upcoming One M9 Flagship Leaks Out In Entirety - Take A Look At Sense 7, Protruding Rear Camera And More

Looks like someone's going to be in some good trouble over at HTC, as the company has once again seen detailed specifications of one of its upcoming devices get leaked. We've seen several specs and benchmark leaks of the One M9, the majority of which point towards the Snapdragon 810 being the processor of choice on the HTC device, with a 20 MP rear camera coupled with audio technology straight from Dolby itself. Today's leak focuses more on the overall design of the device, which doesn't seem to have changed that much.

Not that that's a bad thing. The One M8 was a pretty decent device when it came to design, and HTC's choice to stick to the tried and tested might have provided the company the opportunity to focus elsewhere. Perhaps the primary standing point of the One M9 will be its performance, particularly the integration of Android Lollipop coupled with an upgraded Sense UI, Sense 7. This, topped off by the Snapdragon 810, which is what the device is expected to come with, despite benchmarks pointing otherwise, a 20MP rear camera, upgraded BoomSound speakers and an UltraPixel Selfie camera should make the device a decent offering for anyone wanting a flagship upgrade this year. So enjoy the massive HTC One M9 leak today, and let us know what you think in the comments section.