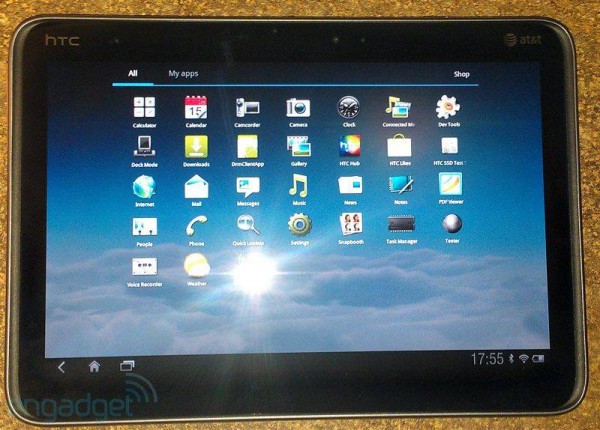 A month ago we showed you leaked pictures of a new HTC tablet known as the Puccini. That same tablet is now known to be coming to AT&T as the 'HTC Jetstream' on September 4th. The last we heard of this tablet was when HTC said it would be coming in late September to October but now it seems AT&T will be bringing it to customers a few weeks before that.

As reported earlier the tablet has a 10.1" screen, 1.5Ghz Qualcomm Snapdragon processor, 8MP and 1.3MP rear and front cameras respectively, 7300mAH battery and a microSD slot for upto 32GB of additional storage capacity. The Puccini also comes with a 4G LTE/HSPA+ radio.  The tablet will run Android Honeycomb 3.1 with HTC Sense UX UI on top. On top of all that, for a limited time the tablet will be offered with the HTC Scribe stylus. (Also sold separately).

The Flyer's big brother is shaping up to be a sweet piece of kit. US customers can get the tablet in September for $700 with a two year subscription plan with At&T whereas people elsewhere will have to wait a few more weeks until HTC launch's the Puccini/Jetstream themselves.