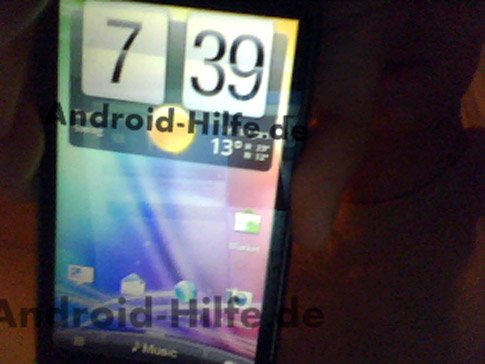 HTC is diversifying itself with a move to enter into the media player market with the HTC Beat pictured above. As you can see from the above onscreen menu, the large centered "phone" button is replaced by "Music" on the Sense 3.0 user interface. The device will probably rival Apple's iPod Touch which currently dominates the media player market.

We don't have alot of information regarding official specifications except that the device will take advantage of HTC's partnership with Beats by Dr Dre. so you're going to get some good quality sound reproduction and a pair of Beat headphones. We also know that the device lacks 3G and the only networking capabilities present are Wifi, Bluetooth and DLNA. It hasn't been revealed what version of Android it will be running but judging from the presence of Sense 3.0 it is likely to be Android 2.3 Gingerbread.

Although we don't have much information at the moment, HTC's supposed entrance into the media player market should have significant effects on Apple's iPod Touch which is the main rival and currently has no decent competitor if you ask me. In the smartphone industry, Android powered phones have had a big impact on the whole industry and more and more consumers are preferring Android over other operating systems for their smartphones. The same could very well happen here aswell. Granted one media player won't affect the market that much, but who knows, once the competition heats up we could be seeing alot of innovation in this industry aswell with powerful media players. All in all this is surely a sign of good things to come for us consumers.