How to sync iPhone with macOS Catalina without iTunes 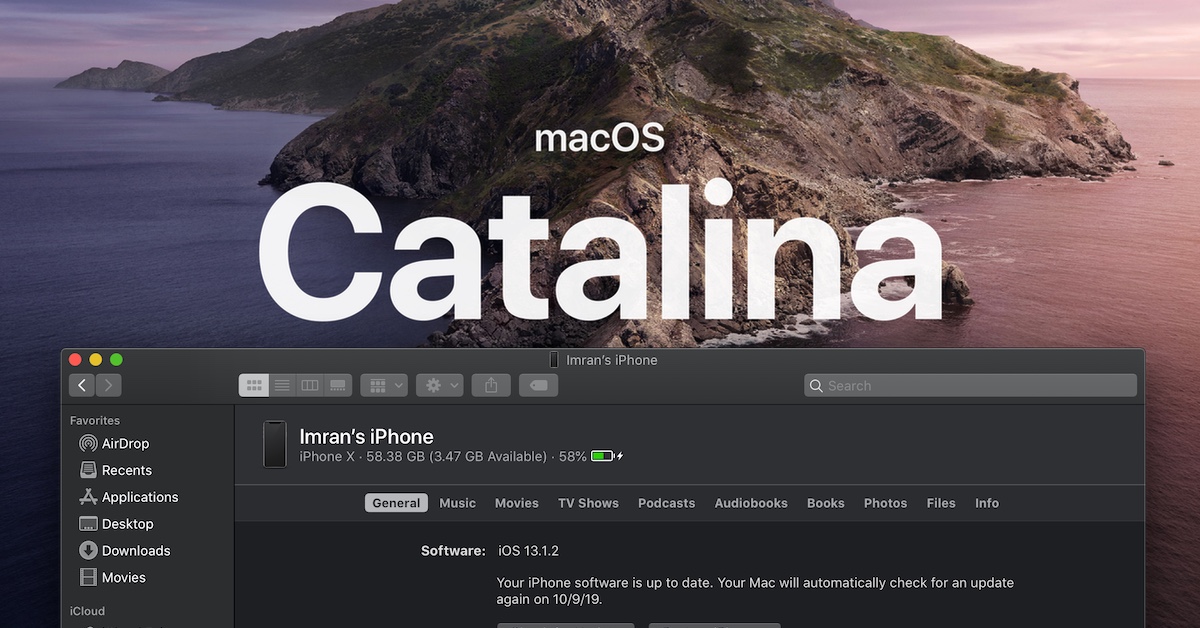 One of the biggest changes in macOS Catalina is the removal of iTunes. Apple has broken down iTunes' core functionality into three new apps: Music, Podcasts and TV. If you are looking to purchase or consume content, these apps would be sufficient. But if you want to sync your iPhone, iPad or iPod with your Mac, you now have to rely on Finder. Here is how you can use Finder to sync your iPhone with macOS Catalina.

With the popularity of iCloud and its core functionality, syncing with Mac is not something is common practice anymore. However, iTunes was used for more than just syncing - it also supported iOS updates, backup and restores, which was probably the most common use for it in this day and age.

When you plugin an iPhone, iPad or iPod touch to a Mac running macOS Catalina, Finder shows it in Locations in the sidebar. When you click on the device, it shows the familiar backup, sync and restore options that iTunes had. You will be able to see your iOS version, check for updates, create backups and restore them too. Sync support for Music, Movies, TV Shows, Podcasts, Audiobooks, Books, Photos, Files, contacts and calendar is also available in this view. Apple had removed support for app backups from iTunes long ago, so you won't find that option here either. 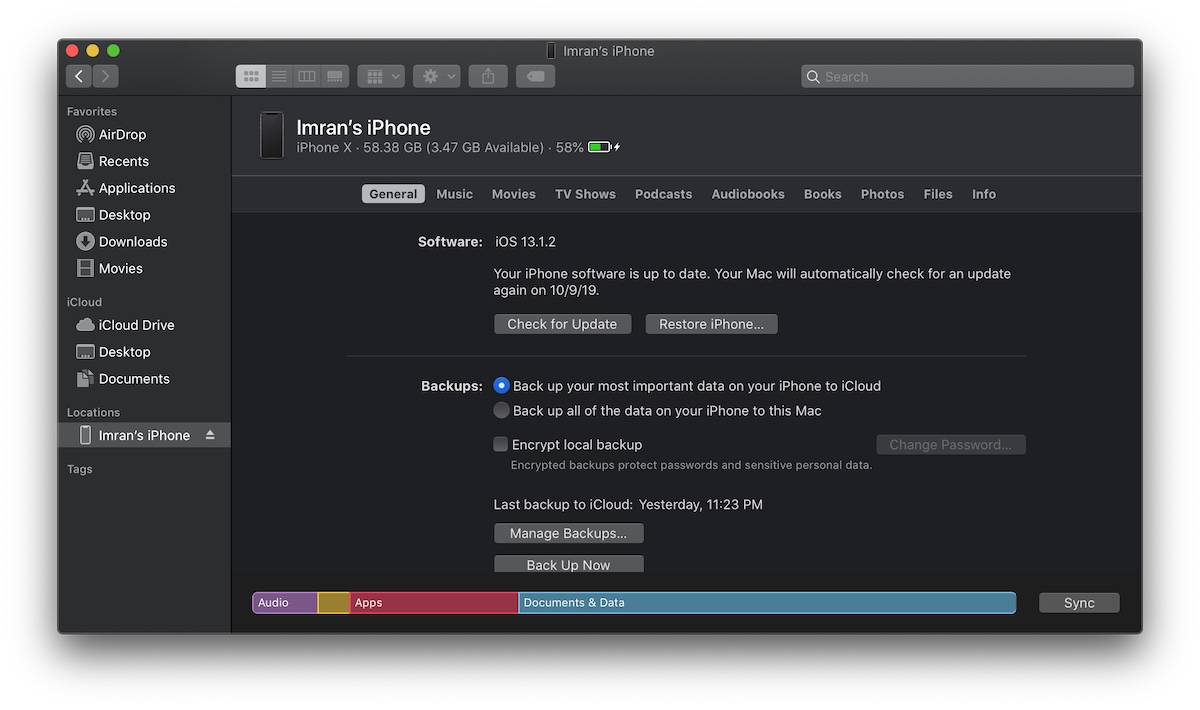 Even though Music, Movies, TV Show and Podcasts have their own apps in macOS Catalina, the content you have in those apps, like your downloads and subscriptions, are listed for syncing in Finder.

To make syncing easier, so you do not have to rely on a cable to connect your iOS device to your Mac, make sure to enable the checkbox next to 'Show this iPhone when on Wi-Fi'. This enables wireless syncing between your Mac and iOS device, which is far more convenient than connecting via a cable. 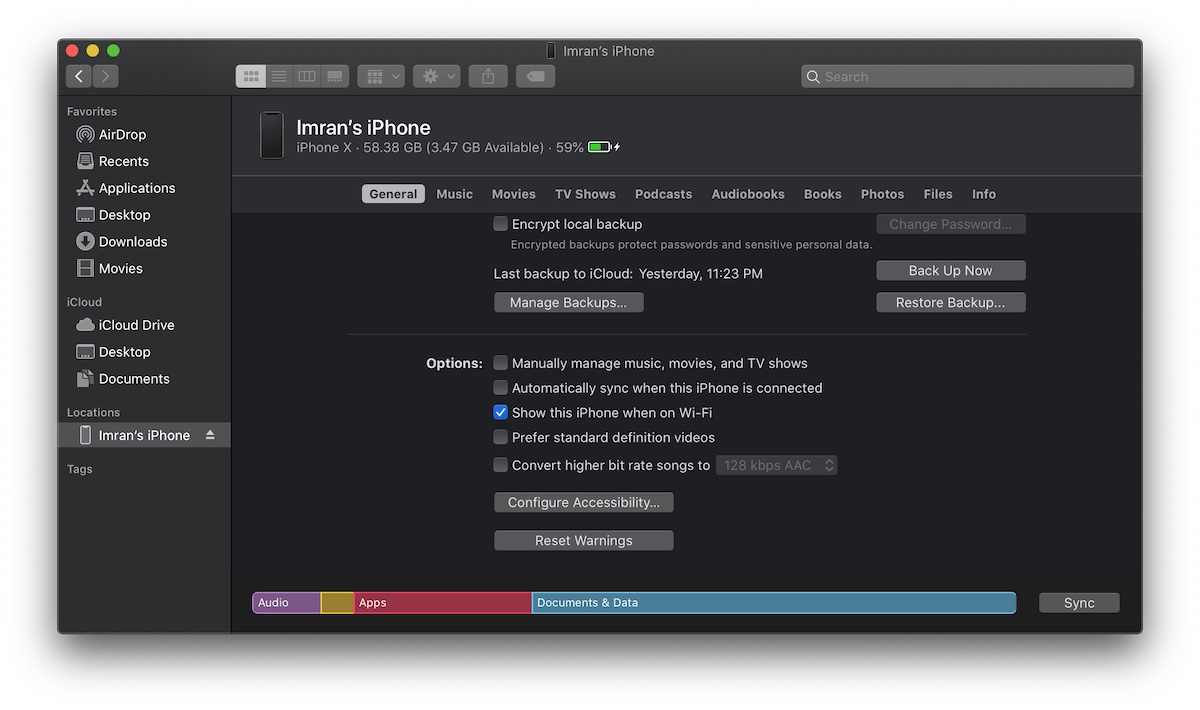 iTunes has been one of the most popular apps on both Mac and Windows. The app was originally created to allow users to buy music, movies, TV shows, music videos, and sync them to their iPods. Users could also sync contacts, calendars and podcasts to compatible iPods. When the iPhone launched, Apple added more content stores which included the App Store and later on, iBooks. Support for syncing bookmarks, files and other data was also added to the app. For a long time, iTunes was primary gateway for users to update the firmware on their iPod and iOS devices, until OTA updates become common.

As you can imagine, all these features meant that iTunes kept getting bloated throughout the years. Since it was a one-stop destination for all tasks related to device syncing, it will be missed by many.

Even though Apple has split iTunes into different apps in macOS Catalina, iTunes still has the same feature set on Windows, so you can continue using it like before.

Do you miss iTunes now that it's gone? Let us know in the comments below.