EDITORS NOTE: Our performance evaluation was done entirely post-patch that was issued after we had access to the game for several days resulting in retesting most of our cards. When viewing performance issues with this game it's important to know whether the evaluation was made on the original build of the game or the patched version that matches what will be released when the game goes live.

Horizon Zero Dawn for PC is still powered by the Decima engine, just like Death Stranding, but it comes with fewer bells and whistles, most notably is the absence of DLSS 2.0, and unfortunately no FidelityFX as well. But, unlike early reporting, I'm happy to say that ultrawide support is present as well as a FOV slider, these were originally said that they were not going to be included in order to 'preserve the original experience of the game', but I'm very happy to see them included. As you'll see down the way, Ultrawide is a bit more stressful than usual in this open-world adventure. The biggest benefit of this game on PC (outside of increased resolution and framerate) is the ability to crank way beyond the original release in draw distance as well as the excellently enhanced ambient occlusion implementation that really makes the world pop.

First, I want to make a request to Sony and Guerrilla, GET RID OF THE 10 MINUTE OPTIMIZATION WINDOW for when you update your driver or change any hardware. Okay, got that out of my system. I want to drop a good tip on this game when you launch it, alt+enter to take it out of full-screen and then alt+enter back in, there is a weird bug that 'should' be addressed where the game is rendered at the set resolution but is downscaled then upscaled back and it just looks odd.

Horizon Zero Dawn comes to us with several arrays of presets; Favor Performance, Original, Favor Quality, and Ultimate Quality. But, that being said, there seems to be a change in presets across GPU configurations resulting in the Ambient Occlusion settings being variable, so for our testing, we used the Ultimate Quality settings but changed the Ambient Occlusion setting to 'Original' for consistency. Horizon Zero Dawn also included a very solid and representative (from my experience post-patch) built-in benchmarking utility. We used that for our testing and took the results from the 176-second run.

Once we had the results from 3 runs, after discarding an initial burner run for loading purposes, we took the average of average frame rates as well as the 1% Percentile results from the run. We report our performance metrics as average frames per second and have moved away from the 1% and .1% reporting and are now using the 1% Percentile. For those uncertain of what the 1% Percentile is, representing is easily explained as showing only 1 frame out of 100 is slower than this frame rate. Put another way, 99% of the frames will achieve at least this frame rate.

*at the time of our review a known issue with the game is that Anisotropic Filtering is not functioning, but in previous games we found this setting to be superfluous in affecting overall performance.

Testing presets at 4K gives us a couple of quick metrics before diving into the game too deeply.  First off, it shows us how the game looks at various presets as well as how performance scales with those settings. Horizon Zero Dawn scales quite well in visuals with the Favoring Performance setting still looking decent enough to not feel like you're missing out on much, but the detail draw distance on the Ultimate Quality is worth the sacrifice if you can muster over the 45 FPS mark, yes 60+ is preferred but the pacing of the game, and especially if you're using a controller, is quite comfortably played.

But, clawing back performance is not that difficult, moving to Original quality can gain you nearly 50% performance increase but I would wager you might be better off using the in-game slider and moving to around the 80% resolution mark and applying either the GeForce Sharpening filter or the Radeon Image Sharpening feature to gain back some of that sharpness. This game could have certainly benefited from either DLSS 2.0 or FidelityFX, both of which could be ported into the game with FidelityFX likely being the easier implementation. We've seen both at work in the engine with Death Stranding and it would be wonderful to see it here as well. 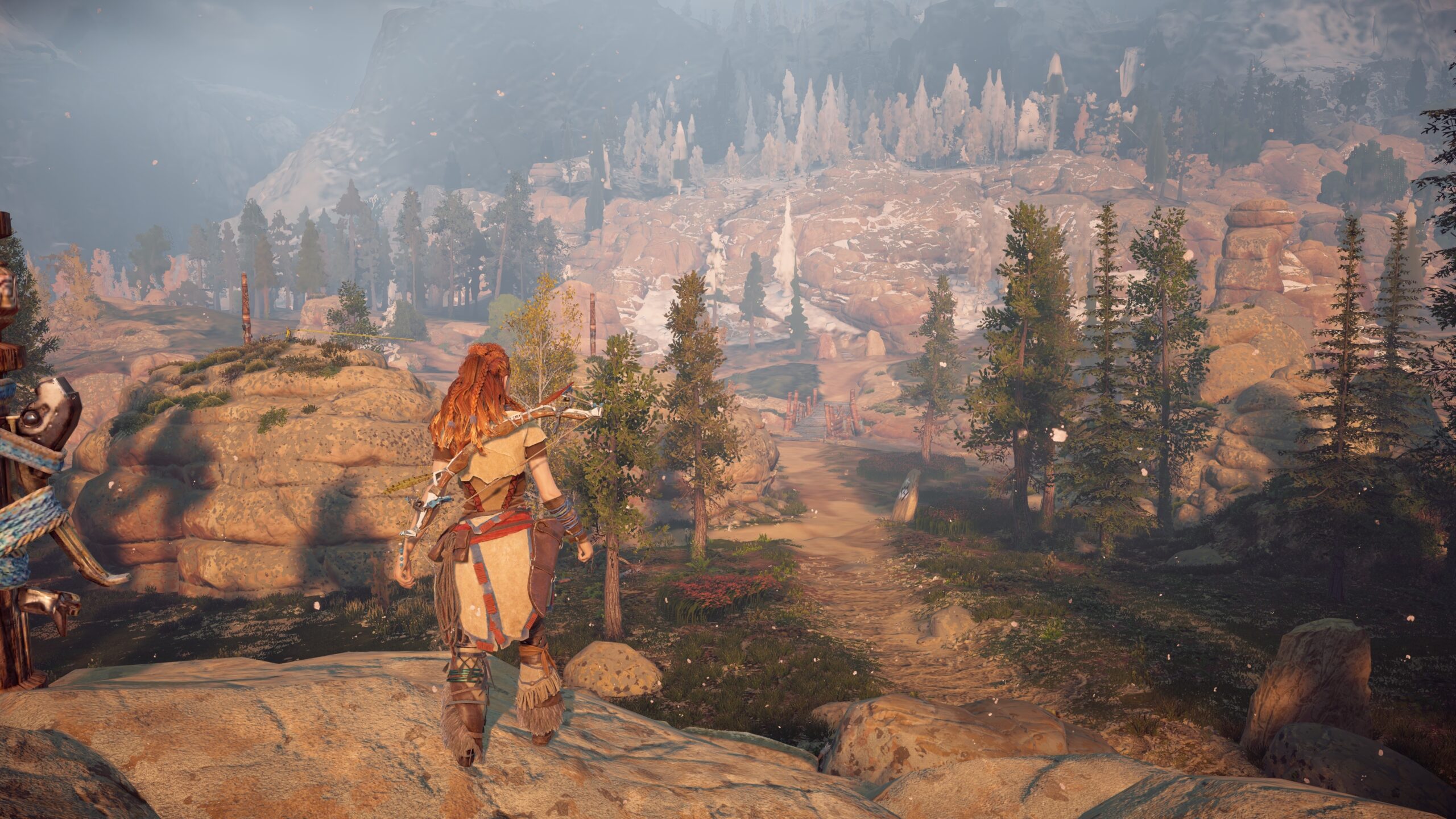 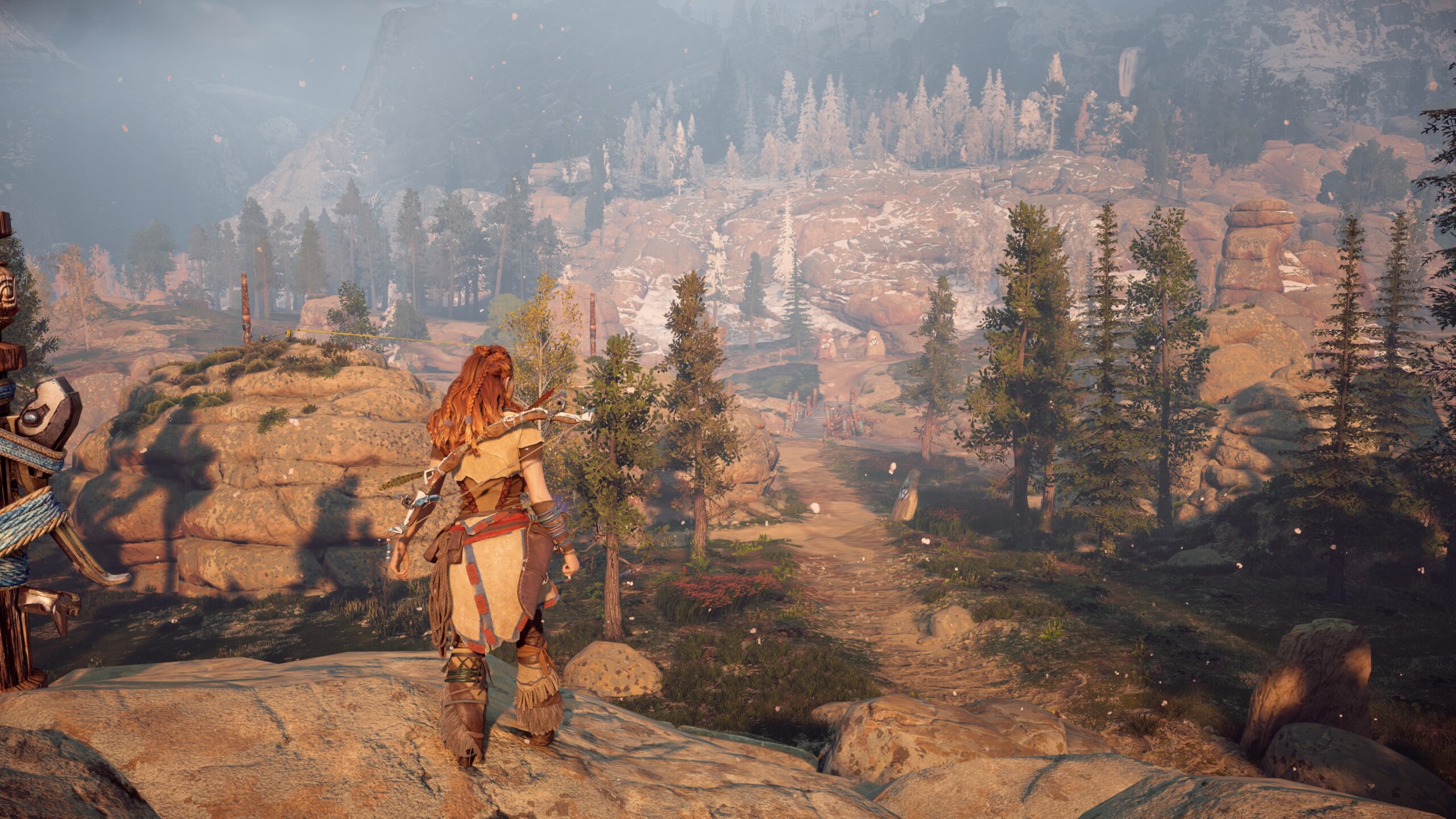 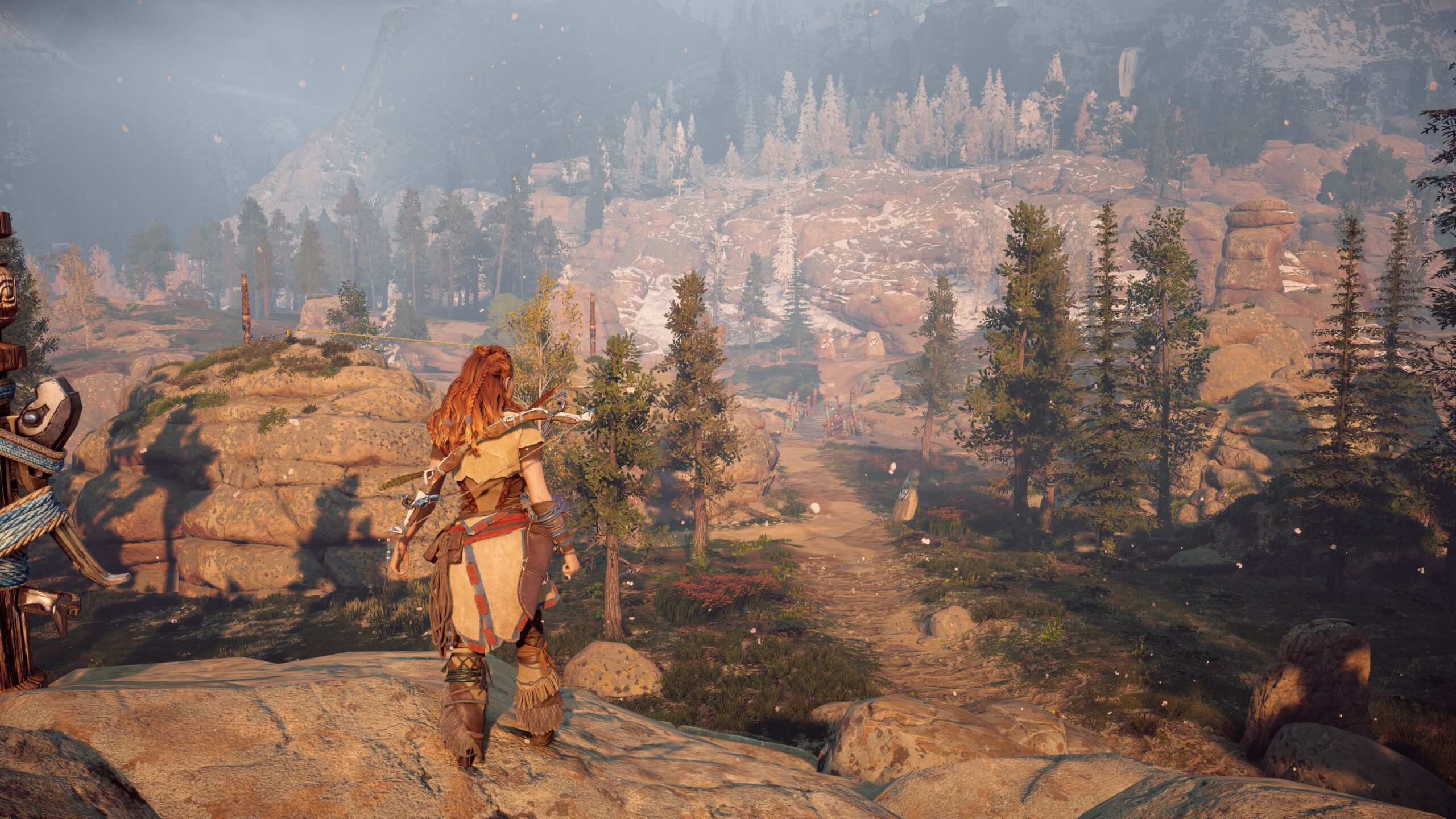 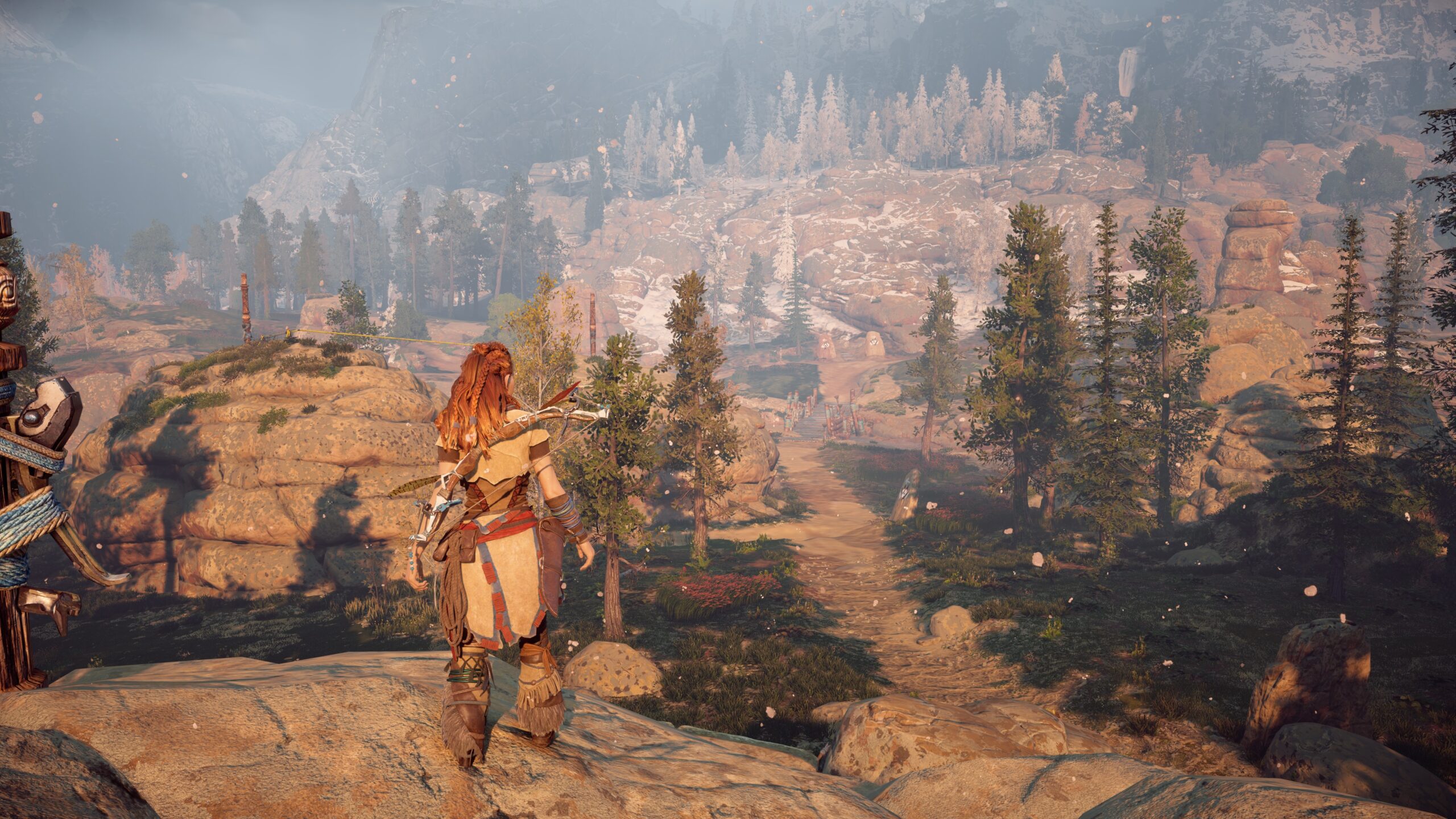 Scaling in Horizon Zero Dawn isn't that exciting to look at when viewed at 1080p, it shows performance hitting its side at six cores, but maintaining decent at quad-core arrangements. If you're rocking a dual-core with quad threads on this one you're likely to see issues, but without multi-threading, you'll be left out in the cold on a dual-core. The game will launch on a dual-core, at least the menus as the game never loaded into a playable scene. The most interesting note is that on six and eight-core arrangements the inclusion of multi-threading doesn't seem to help and at the high end, actually hurts performance slightly. One thing is clear, this game is exceptionally GPU heavy and is relatively unaffected at even 1080p with the RTX 2080Ti when reducing core and thread count.

Overall the PC performance of Horizon Zero Dawn would have been pretty shoddy if we had gone off the original build of the game so we're glad they've cleaned things up in time for the launch. This gives us hope that issues like the nonworking Anisotropic Filtering adjustment will be fixed, but this isn't giving the game a pass for that being missed. The other oddity you'll find pretty apparent here is going to be the 30 fps facial animations, that really cause cutscenes to feel odd, especially when, at times, the eyes are moving at full speed.

BUT, performance is not quite as good as I hoped for and really shows that something like DLSS 2.0 or FidelityFX would make an excellent addition here to claw back some performance on some cards at higher resolutions. Ultrawide resolutions are unusually difficult to run at levels they do in other games, there seems to be a bigger hit than usual. Neither GPU vendor has any major issues with the launch of the game, so any problems to be uncovered will likely be with the game itself and could, hopefully, be patched in the future

The Navi cards did spectacular here delivering better than anticipated performance numbers when putting up against their direct competitors. Showing greater than a 10% performance advantage in with the recent GPUs. Their Vega lineup and Polaris do okay against the Pascal counterparts. One of the more interesting points is how utilizing Hardware Accelerated GPU Scheduling really pushes the GeForce GTX 1650 to parity with the RX 5500XT and kisses the GTX 1660 despite it being the more powerful card with more VRAM.

Something of note in the results in where cards register a Zero number. What I found was a few cards in the Radeon lineup seem to fall victim to assets not loading. I recorded them as Zero because it's essentially unplayable because all that will load in are characters, the skybox, and land formations. This is an unfortunate effect that only seems to affect the Radeon cards, the GeForce cards handle the game perfectly fine across the board. Something to consider is it is only happening at resolutions above and beyond what those cards are designed for.

Before the patch there were stability issues abound, sometimes the game would stutter at a strange interval no matter what was going on, and often would simply not launch properly. I'm glad I waited until after the patch dropped to start recording data and found the game to be in a much more attractive state. I can't defend the odd 30 FPS facial animations but it is a game you'll probably want to cap at around 60 FPS anyway to smooth the fluctuations out. The issue with the Anisotropic Filtering bug should be alleviated by the time the game goes live. But, for now, I'll be back in and exploring the world with Aloy.