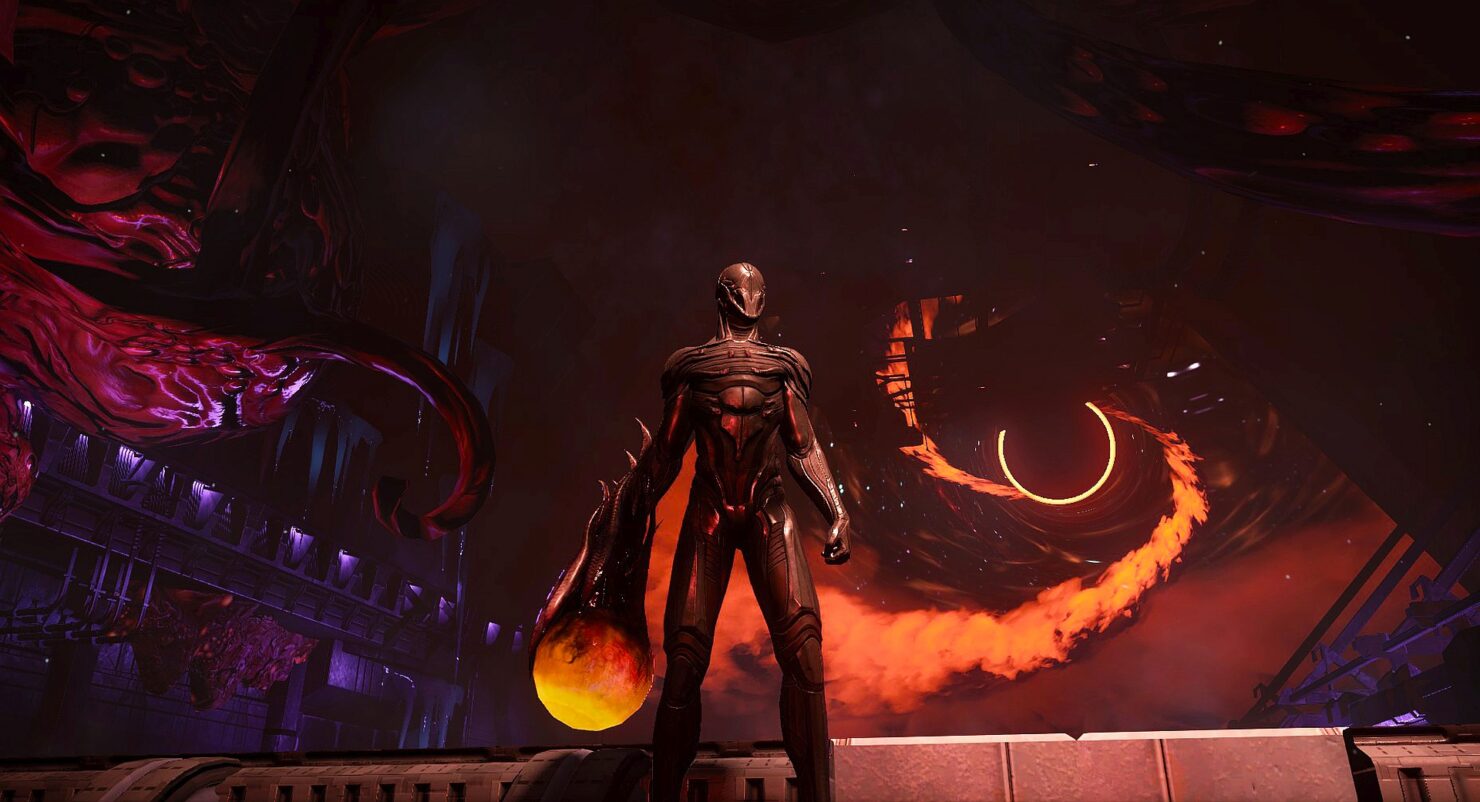 At Cradle Games, a small indie studio that's partnering up with tinyBuild, a team of passionate developers might be coming up with the next great Soulslike. To quote the developers themselves, "Hellpoint is an occult cosmic dungeon crawler offering split-screen multiplayer and brutal combat inside a real time orbiting space station." We recently got to sit down with the first ten hours of the latest build of Hellpoint, not to be confused with its free playable demo sequel, Hellpoint: The Thespian Feast.

Hellpoint opens with the player being 3D printed and formed into a nameless character known as the Spawn. In the wake of cataclysmic events that all but devastated the Irid Novo space station, the player's tasked with seeking out the causes of this merging of realities and whatever other craziness lead to the current state of affairs. 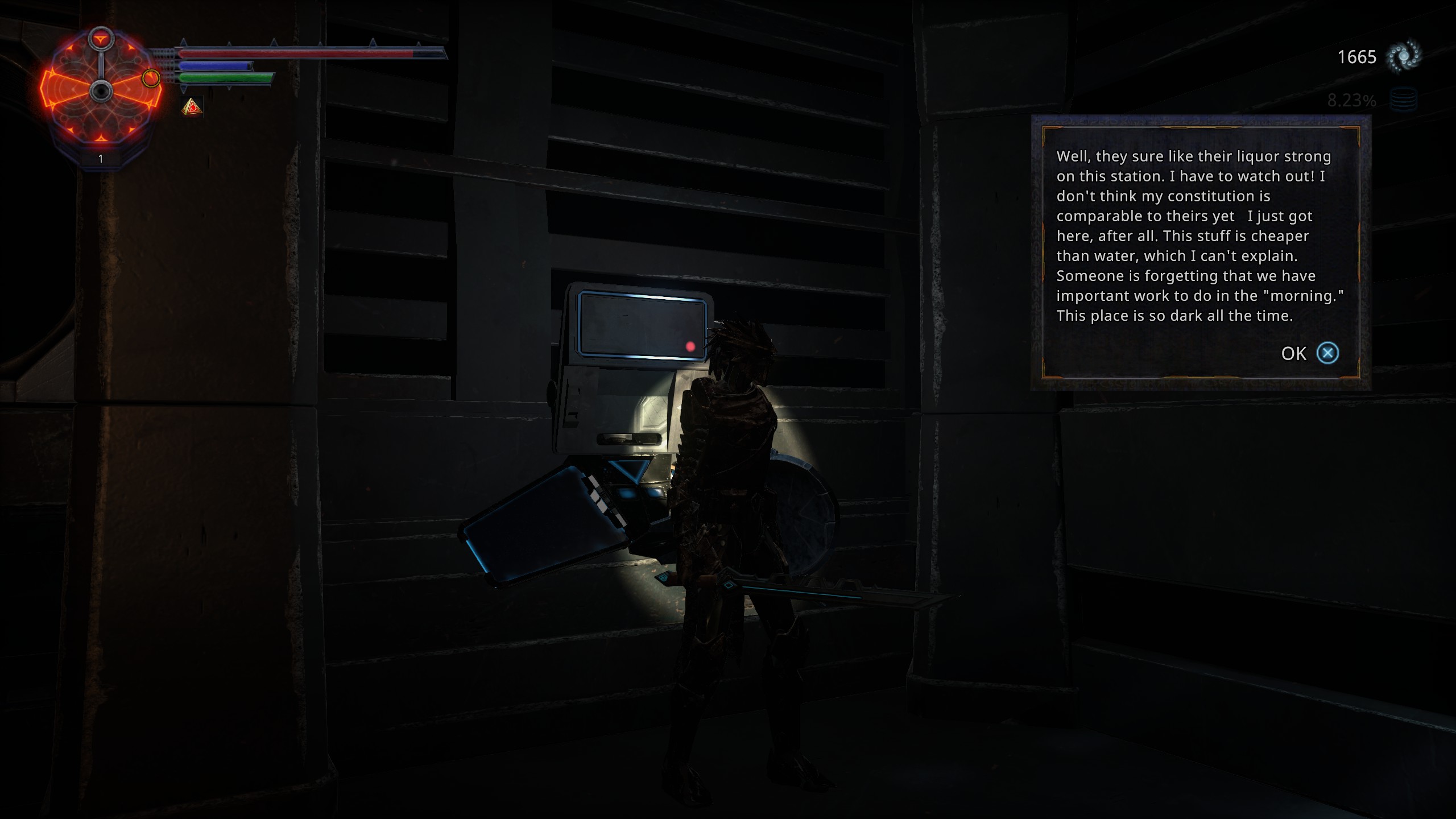 The setting of Irid Novo is far removed from that of Drangleic or Sengoku-era Japan. Wood and stone are traded for 3D printed materials and metals that build the space station, but the world is nowhere near as pristine as science fiction makes it out to be. Victims, the basic of fodder enemies and casualties of the cataclysmic Merge, wander the empty halls and wield whatever makeshift weapons they can get their hands on, from manufacturing tools to giant chunks of rebar and building support. And, in true Souls fashion, they're all out for the player's head.

Combat in a Soulslike can vary slightly but they tend to follow a fairly similar formula. Enemy attacks can inflict massive damage to the player, often killing them in but three or four solid swings. The same works in reverse as the players can use any weapon in their arsenal with roughly the same effectiveness (provided they have the stats to wear the equipment) against any old victim. Bosses are always another story and typically the highlights of any Soulslike game. Fog gates still appear to warn you of an impending encounter, but the Hellpoint developers have promised to patch those out in the coming days and make for a more dynamic experience. In the preview I was able to complete, I ran into a diverse group of bosses, from oversized canine beasts to the Ornstein and Smough tag team wannabes that complement the weaknesses in the others' moves. 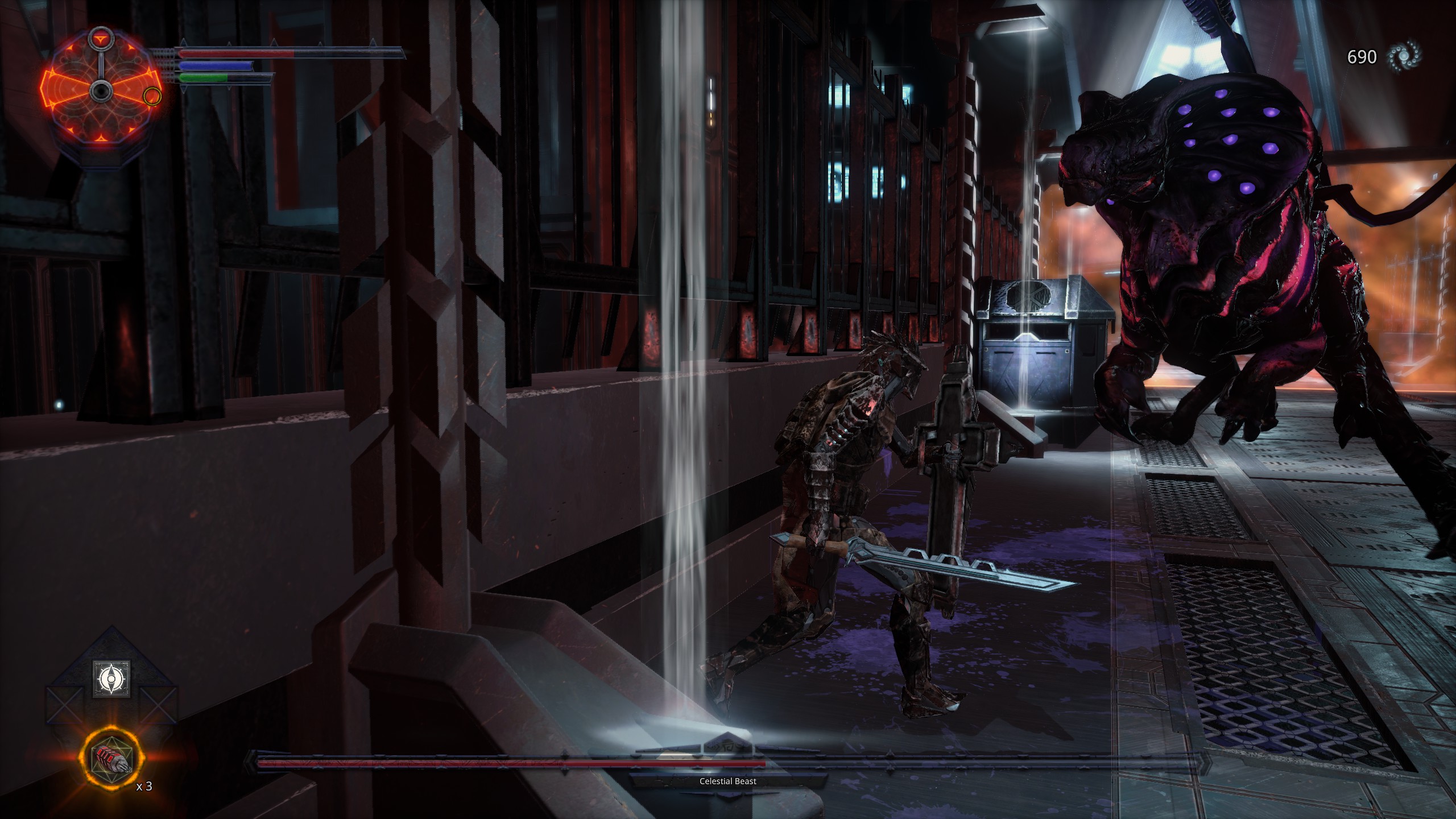 To stay alive in Hellpoint, a strong offense is just as good as a solid defense. Players have access to not only a variety of one-handed melee weapons but also caster wands, guns, and the obligatory shield (which is also getting a parry ability added some time after this preview goes live). Wield these more exotic weapons requires an investment in Cognition or Foresight, so don't treat these as dumpstats if you're wanting to make the most efficient killer. Each melee weapon will typically have both a quick and heavy attack (R1/R2 respectively on a PS4 controller) while a select few others can gain experience and proficiency that not only provide passive bonuses but also new weapon arts that are unique to each weapon. The Officer Glaive, a one-handed blade I used for much of my playthrough of the Hellpoint preview, has one passive buff that increases blade length and damage while the other ability is a charging dash that cuts through enemy defenses like a hot knife through space butter. In its current state, the combat to Hellpoint feels a bit stiff, and dialing in a second or third hit before the previous has connected will force the player to commit to the swing and often take a hit or two to the back of the head if you aren't paying attention. It's a bit clunky at the moment, but I do look forward to coming back to see how it has been improved in the months leading up to a Q2 2020 launch.

What sets Hellpoint apart from other Soulslikes, except for the likes of Sekiro, is in the verticality of the level design. Dark Souls, for as much praise as the interconnected world receives, is about falling into success, or rather constantly moving downwards to reach secrets or sidequests. Since jumping is another unique feature to Hellpoint, much of the levels play into this unique ability. When the path is blocked, simply jumping across broken barriers or seeking out hidden elevators is often the best (but not the only) path to proceed. Locked doors with keys looted off corpses or hidden walls that can be struck to reveal treasures, both a hallmark of the Dark Souls franchise, are quite at home in the world of Irid Novo. However, it's in the exploration of Hellpoint's open levels and seeking out paths up and above the structures that can be the most rewarding. When you first set foot in The Observatory for the first time, do try to look upwards and try to find a source of inspiration.

Hellpoint also features a multiplayer system, and while the online co-op and PvP modes were unavailable to test, I was able to get hands-on with the local co-op (another first for a Soulslike). After having two characters that have spawned into the world of Irid Novo and undertaken the introductory healing tutorial, the second player can join the host freely just by picking up a controller and hitting start. Once in a host's game, both experience and loot are freely distributed for both characters, so picking up environmental loot or a new helmet off a dead guy will reward both players for their time. In the current build, I could not find a way to drop items for the other player, so the dreams of cheap and easy item duplication won't come true that easily.

Paying attention to time and timed events aren't often something that fits into the Souls narrative, as events are typically much more cryptic in nature. The station of Irid Novo is in constant orbit around a supermassive black hole that often can lead to some unintended consequences, such as riskier encounters with harder enemies but with the rewards of better loot. This also means boss fights can also be more challenging if you aren't paying attention to the time. The clock in the upper left-hand corner of the screen shows both the location of the black hole as well as the orientation of where the player is currently located within the station; if these two overlap, the black hole starts affecting the in-game world for a brief period of time. During the 3-o'clock and 9-o'clock hours, the station crosses a plasma surge that can also transform the world in hidden ways.

In its early form, Hellpoint already has the hooks in place for what could be the next great indie Souls, especially as one that offers such a rare feature as couch co-op. With the coming months left to polish down some of the rougher spots, Cradle Games is one developer I plan on keeping a close eye on. When Hellpoint launches on consoles towards the end of Q2 2020, I certainly look forward to spawning back in and exploring Irid Novo all over again.