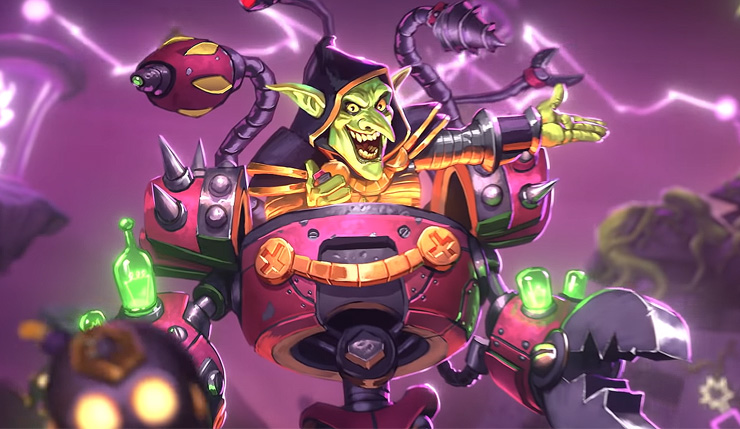 Blizzard has revealed their latest Hearthstone expansion, The Boomsday Project, and it’s a bit of a blast from the past. The new card set focuses on “science,” specifically, the mechs, weapons, and other explosive goodies created by Goblin researcher Dr. Boom. Thematically, Boomsday Project feels like a sequel of sorts to the Hearthstone’s very first expansion, Goblins vs. Gnomes.

Oddly, Blizzard has yet to make a big, official announcement for The Boomsday Project, but they did quietly release an unlisted reveal video. Perhaps we’ll get more information later, but for now, you can check the typically-wacky trailer, below.

In terms of new mechanics, The Boomsday Project adds the new Magnetic keyword, which lets you combine mechs with other cards to share stats and powers. They’re also introducing Projects, new spell cards with super powerful effects that help all players. Finally, we’re getting Legendary spells for the first time. Seems like Boomsday Project will be a solid shakeup!

The Boomsday Project will include a total of 135 new cards. You can get a look at the first five cards revealed (Spider Bomb, Omega Defender, Biology Project, Myra’s Unstable Element, and Electra Stormsurge) in the gallery, below.

Any Hearthstone players out there? What are your impressions of The Boomsday Project so far? The new mechanics seem interesting, and Legendary spells are a cool addition, but none of the cards seem too thrilling yet. But hey, there’s still plenty more to be revealed.

Blizzard will be sharing more info about The Boomsday Project via a livestream on July 23. The expansion is set to launch on August 7. Hearthstone is available on PC, Mac, and mobile platforms.