Half-Life 3 has been in the news A LOT recently, a Valve employee was spotted in a Half-Life 3 T-Shirt not too long ago and Gabe Newell even hinted that they are releasing something with a 3 in it in 2012, but could this be more proof of the game or could this be a clever attempt at a masterful skill of trolling a community? An otherwise brilliant looking Half-Life 3 logo has made a surprise appearance on THIS website which shows the Half-Life 3 logo. While the logo is different from the one worn by the a fore mentioned Valve employee many forums on the internet have come up with strong evidence that this might just be the real McCoy. 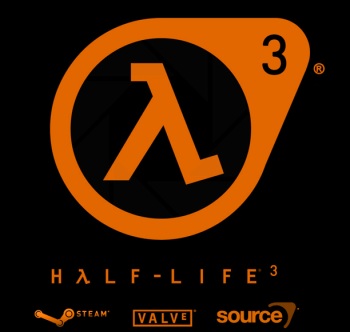 Sure anyone can make a really impressive logo but the people at Escapist Forum have gone from being nay Sayer to believers when people are bringing more and more interesting discoveries post after post presenting some really interesting evidence to suggest strong hints that Half-Life 3 is INDEED very possible? If 2012 becomes the year I finally get to play a Half-Life game I will be the happiest (among a million other) happy PC player ever.

The cliff hanger of an ending Episode 2 left us with so many years ago deserves some answers but sadly Valve moved on to other projects since then such as Team Fortress 2, Left 4 Dead / Left 4 Dead 2 and Dota 2 but could this be Valve's way of showing some love to fans of a forgotten game? Currently there is a lot of speculation that this could be fake but if you read through the source and the link I gave to the escapist forum discussion you might get some ideas and decide for yourself whether this is the real deal or not.

Here is a neat tip for you, save the image above and open it in any image editing software, play around with the brightness and contrast and be in for a surprise ;).